After young Egyptian men launched a campaign to boycott marriage due to the unfulfillable demands of prospective brides' parents, women countered with a campaign of their own in defense of their families. 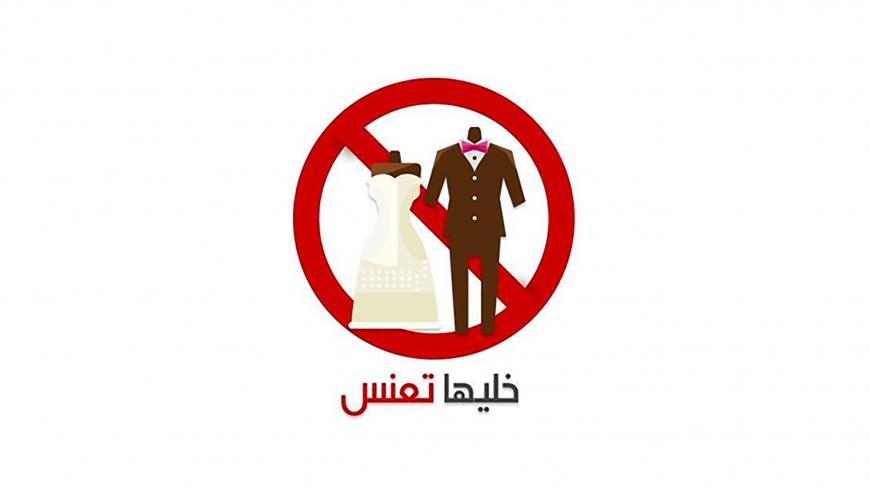 The Let Her Stay Single campaign, whose logo is shown above, has sparked a debate over the cost of marriage and has led Egypt's religious authority to issue a statement in defense of the institution. - Facebook/5alehat3ns

The online campaign Let Her Stay Single, launched on Facebook, urges young people, primarily men, to boycott marriage rather than struggle to meet the financial demands of women's families before they consent to their daughters marrying. A typical demand might include a fully furnished home, jewelry for the bride and family and a big wedding. The campaign, whose logo depicts a bride, a groom and a crossed red circle, kicked off on Facebook in early January. Its popularity attracted the attention of local media.

Many of the online postings maintain that if jewelry and a huge wedding are required to get married, it might be best for young women to instead remain at home and accept “spinsterhood.” Supporters share cartoons or pictures of what they call “old maids” or “spinsters” along with anecdotes about how they failed to marry the woman they desired because they could not afford her family's demands.

A young man in his 20s who posted his experience on the campaign's Facebook page and requested anonymity told Al-Monitor that his first relationship ended two years ago because his girlfriend's family requested a house in an affluent neighborhood, a huge dowry, an expensive wedding ring and a wedding party in a luxury hotel. The total cost would have been 1.5 million Egyptian pounds ($85,709).

Although the young man earned a monthly salary of 8,000 pounds ($457), which is better than most, he could not meet all of their requests over the course of a two-year engagement. “I calculated that I had to save more than three-quarters of my income for more than 200 months to fulfill their demands,” he told Al-Monitor.

Egyptian women who feel that the anti-marriage campaign portrays women and their families as money-grabbers were quick to start a campaign of their own, using the hashtag #stayinyourmother'slap. Since its launch on Jan. 28, a number of groups and individuals behind various Facebook pages have adopted the hashtag with the common objective being to counter the claims that men face the financial burdens of marriage alone. Many posts note that the brides’ families shoulder costs as well.

Heba Abdel Aziz, a campaign co-founder, told Al-Monitor that Let Her Stay Single depicts most girls’ parents as materialistic, but it is actually only “uneducated” families that seek to ensure material gains through the marriage of their daughters. “Well-educated families that are keen on their daughters’ future do not tie marriage to money, especially since the girls’ parents traditionally bear half the cost of the wedding.”

Mohamed el-Masri, a co-founder of Let Her Stay Single, told Al-Monitor his side of the story. “Our campaign does not intend to insult women,” he asserted. “Nor do we portray only the girls as spinsters. Spinsterhood is a description that applies to men and women. Many girls who have been denied marriage because of their parents’ exaggerated demands support us.”

Meanwhile, Dar al-Ifta has condemned Let Her Stay Single, declaring it “contrary to Islamic law,” even if those behind it had good intentions. In a report published Feb. 14 on its fatwa website, the authority called on Egyptians not to join the campaign because reluctance to marriage could push youths into extramarital relations, which is contrary to Sharia.

Dar al-Ifta also pointed out the need to remove social and financial obstacles to marriage. It urged families to lower their dowry requests and for young people to take advantage of loan programs for newlyweds.

Responding to Dar al-Ifta, Masri said, “We [also] believe that marriage is God’s will. Ours is a call to end the harsh conditions imposed for getting married. … We are calling for a temporary boycott, not an indefinite boycott.”

Some activists, among them Ahmed Hijazi, believe the campaign is unlikely to achieve anything. “These young men are not only frustrated but immature,” he told Al-Monitor, additionally claiming that they were mainly chasing beautiful and rich girls beyond their economic class and therefore unattainable.

He also called them shallow in terms of their choices.

Siham Afifi, a retired sociology professor at Menoufia University, explained the problem of financial demands in terms of “inherited traditions.” “The fact that these traditions continue to be observed today reflects the strong domination of the older generations at the familial level,” she told Al-Monitor. The younger generation, male and female, according to Afifi, often end up bowing to their demands.

Afifi said that she hopes the social media campaigns will create awareness and empower young Egyptians, especially women, to demand greater freedom to make personal decisions about marriage and in other areas of their lives. She called on families to limit their input to advice and guidance, with ultimate decisions being left to their children.

Egypt flips its wig over cost of imported cosmetics