Turkish independent women don't need to put a ring on it

The stigma of being an old maid is slowly fading in Turkey. 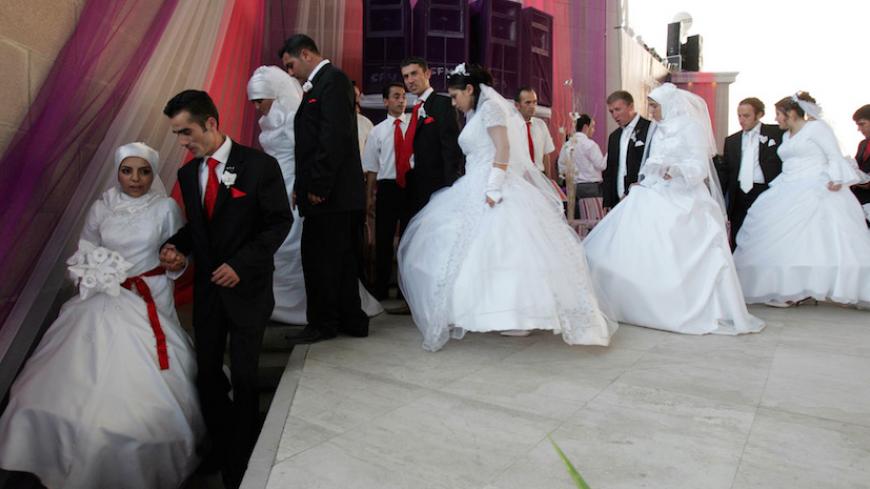 Brides and bridegrooms leave the stage during their wedding ceremony in Ankara, Aug. 6, 2006. In an annual ceremony organized by Ankara municipality, 206 couples were married at once. - REUTERS/Umit Bektas

What is the first duty of every proper Turkish girl? “Play hard to get with suitors for her hand in marriage!” The best-selling book “Kocan Kadar Konus" (You are only as good as your husband) has been talked about by women, young and old, since early 2014. The movie version of the book was released March 20. The book advises single women on how to tie the knot with Prince Charming, but the rules are counterintuitive: First and foremost, you do not want to give the impression you are available. Guidelines suggest that “if you want to be caught [by a prospective husband], run away.” Also, “Never reply to his text messages or calls immediately, wait at least 30 minutes. Keep him in suspense.” Teasing the suitor is strongly advised. “Show off how pretty you are, but never let him touch you.” Then come the planned tantrums — “make sure he struggles to please you, don't be easy.”

Indeed, this satirical book of advice for single women may be validated with a recent decree from the official Turkish Language Institute. In the updated Turkish dictionary, the institute defined the word "available, up for it" (musait) as “a woman who is ready to flirt, easy to flirt with.” Who would want to be "musait" after reading this definition? Although the definition caused a stir in Turkey, it seems the book also advises single women not to appear available, but rather appear uninterested in their prospective spouses. The book was criticized for style of prose and being too simplistic. However, it has been dominating social media and newspaper columns since its release. Readers have frequently commented that “the book captures our real life experiences.”

You may ask who buys this book. Al-Monitor asked a bookseller on the busy streets of Taksim in Istanbul, who said, “Everyone. Women of all ages buy this book, but a significant number of men do as well. The men frequently tell us they are buying it for their sisters.” One customer in the store told Al-Monitor, “Every family has a spinster, you know.” There are quite a few colloquialisms in the Turkish language discouraging women from remaining single, such as “The girl who is too picky, will end up marrying a bald man”; “Unmarried men are called single, but unmarried women are called spinsters”; and “While in the cradle, a baby girl's dowry must be ready at home.”

Although studies show arranged marriages have significantly decreased and the age of women having their first babies has gone up in the last decade, still marriage is an important event in Turkey. An actress in her early 40s, Deniz, who would provide only her first name, told Al-Monitor, “We wake up and turn on the TV in Turkey and channel after channel bombards you with programs on marriage. And check out the hundreds of Internet dating sites. There are sites for conservative, observant Muslims and sites for workers and even government employees. But on these sites one can't find men in their 40s or 50s with a white-collar job. If you find one, he is looking for a 20-year-old. And if you find a decent man, probably his family will tell him, 'Don't even think about marrying a 35-year-old woman, she cannot have babies.'”

Deniz added, “I gave up on dreaming of prince charming long ago.”

There is indeed one dating site, “My Macchiato,” that targets college graduates of at least 25 and with an income that is above average. How much signing up for the site costs depends on your age. The older you are, the more you need to pay (those over 40 roughly pay $1,500). You are promised a decent relationship with another well-educated partner. A 42-year-old divorcee, a CEO of a prominent company who has paid for the service, told Al-Monitor, “It is a decent site and they work diligently. However, I suspect they have more female members than men. Many women of my age and financial status look at their services and say, 'Finally I found the place,' yet men I may desire don't use these services. There are too many of us, and too few of them. Frankly, I'm happy as a single woman but I had to try these sites to appease my family.”

Indeed, single women over 30 are openly mocked as failures in Turkey. “Kocan Kadar Konus” highlighted this prevalent fact for women in Turkish society: “If you have a husband, you exist as a human being in society. If you are single, we pity you.” Nur Kiziltas, a journalist over 35 and single, told Al-Monitor, “My older sister married when she was almost 30. I was 15 at the time. She married a 20-year-old college student, just to be married. She has been married for almost 20 years now. Her Islamist husband has had another wife for the last 10 years. We all know that, but what can we do? They have kids. She has had platonic relationships as well. Marriage is meaningless. I have a boyfriend, but I have my own flat, and no, I don't need a husband to brutalize me, thank you very much.”

Given the high rate of sexual and physical violence within marriages in Turkey, one can understand why women such as Kiziltas decide to stay single. Al-Monitor recently reported that the Justice and Development Party (AKP) introduced financial incentives for early marriage. Indeed, this was a smart move targeting voters.

“Marriage is innate in the nature of a Turkish girl,” another single woman in her late 30s said. Esra Oz has a doctoral degree in engineering, a field dominated by men. She told Al-Monitor, “I missed the [love] boat in college, because I pursued an academic career and denied myself distractions. My extended family insinuate the need for a man in the house, and promote potential candidates. Let’s be honest, as women get older, are more educated and financially independent, the chance to find a compatible husband decreases. I may marry a man in his 40s, but he will probably be a divorcee with kids. I'm not sure if I'm up for that,” echoing the common concerns of other single women.

The Turkish Statistical Institute’s 2012 report Women in Statistics shows that the average age of marriage for both men and women has gone up since the AKP came to power in 2002. Still the same study reports that about 66% of all Turkish women get married before the age of 25, while it is only 34% for men in the same age group. Interestingly, the percentage of women living alone between the ages of 30 and 64 is twice as high as men. Several pundits have questioned how this finding can be explained in a patriarchal society.

Surviving as a single working woman in Turkey, either as a divorcee or bachelorette, is possible and quite pleasant if you have sufficient income and support. Turkey ranked 95 out of 126 — four places behind Iran — in the International Labor Organization Statistical Database of female managers in 2012. So who are the women able to live alone?

One prominent sociologist in Turkey, who asked to remain anonymous for fear of losing his job, told Al-Monitor, “The household numbers for single females are skewed because most of these are the second and third wives of polygamous, pious men. If you look at the data for single parent households you will see a direct positive correlation. The majority are single women who are not mistresses. They have advanced degrees plus financial and emotional support from their families and can afford to live in fancy gated communities.”

Overall, we may conclude that given the high rates of divorce and women's murder in Turkey, despite all the social pressures — whether religious or secular — educated working women seem to have a carefree and happier lifestyle than their happily-ever-after married female friends.