Polygamy is growing among Iraqis as the men who indulge in it cite both progressive and Islamic justifications. 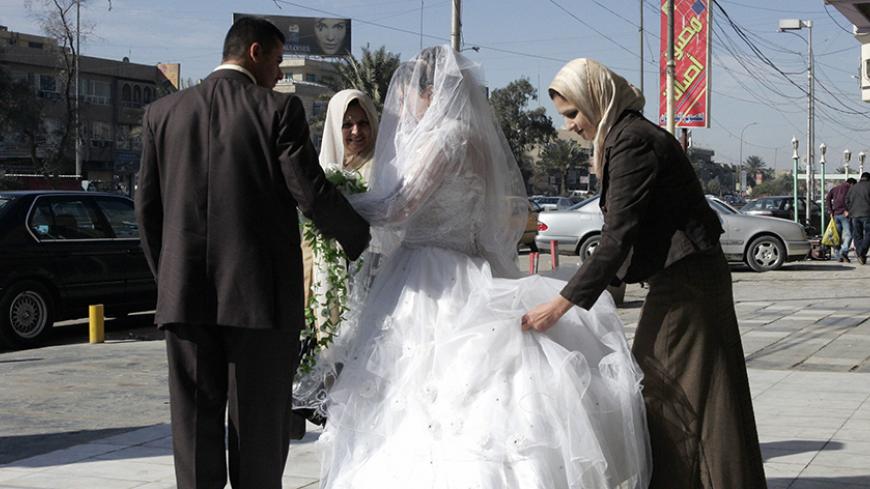 An Iraqi bride prepares to go to her wedding party in Baghdad, Jan. 4, 2007. - Getty Images/Sabah Arar

BAGHDAD — Hashem (a pseudonym), told Al-Monitor, “I married a widow who works as a schoolteacher and lives in the city of Karbala. I did so because I needed a woman from the same academic and cultural background as mine, as I was fed up with my illiterate wife.”

Hashem said that he graduated from the Arabic department at the University of Baghdad in 1982 and then married his cousin while living in the countryside on the outskirts of Baghdad.

“After 2003, my monthly salary increased and my living situation improved. Later on, I met a female colleague and we agreed to get married,” Hashem said, adding bluntly, “My first wife does not know I have a second wife, but my new wife knows that I am married and she understands the circumstances that drove me to marry a woman who is not of my level.”

Although Hashem, who is a teacher, said he married a woman who does not share his educational level, he has four children with her and he is proud of them.

Women's rights activist Susan Qaisi told Al-Monitor that this duality in behavior — when a man lives with a wife for two decades and has four children with her and then claims that she is unsuitable and that he is forced to remarry — is social hypocrisy. She said, “This is the product of a backward culture that sees women as a commodity that may be sold by a man as he pleases. Invoking cultural differences after a long time of marriage is not convincing.”

The second-wife phenomenon, both publicly and in secret, is widely spread in Iraqi society. Polygamy has increased with per capita income.

Those who support the practice invoke Islamic permission for polygamy, which is authorized under the 1959 Personal Status Law with a judge’s permission, on the condition that the husband is financially capable and provided there is a "legitimate" reason for concluding another marriage. Possible "legitimate" reasons include the first wife being unable to bear children or having a disease preventing her from performing her other "duties" to her husband.

However, others consider this a backward phenomenon that has no place in the modern era and leads to social problems, such as family disintegration and juvenile delinquency.

In another example, soldier Hassan Jassem is not even 30 years old but already married to a second wife. He told Al-Monitor, “There is full harmony between my two wives and they live with my mother under the same roof.”

Jassem said, “I got married for the second time to a widow who is my friend’s sister, to save her from staying alone with no husband and especially since she did not have children from her first marriage. We are now expecting our first child.”

Jassem gave several social and religious justifications, saying that he followed the advice of a religious man who encouraged him to marry widows, divorcees and spinsters.

The polygamy phenomenon has increased with the increasing numbers of widows resulting from the wars Iraq has fought over three centuries. The number of divorcees and spinsters is also said to be rising, though there are no accurate statistics available.

Salam Jabbar, a human rights activist and researcher with the University of Qadisiyah, told Al-Monitor, “A second marriage in Iraqi society has become an urgent necessity, and the first wife must understand this so as not to force the man to marry in secret.”

Jawad al-Shamari, the media director of Iraq’s Human Rights Commission, spoke to Al-Monitor and criticized the attitude that women are “inferior,” saying, “Inter-gender communication on social networking sites and the rise of employment among men in the private sector boosted the polygamy phenomenon.”

Civil activist and writer Ali Srhan has a different interpretation. He told Al-Monitor that polygamy “is due to the sexual complex suffered by the Iraqis,” saying, “This complex is expressed in different ways when it comes to marriage. In light of the lack of freedoms and social and economic backwardness, marriage options are closer to coercion rather than freedom of choice.”

“It is easier for a man to opt for a second marriage, given the large array of 'aesthetic choices' that have spread with the new means of communication, which offer men in particular a vast multiplicity of temptations,” Srhan said. “This is also due to the fact that women in our society are less willing to serve their husbands [now that they have more economic freedom and independence], in addition to the improved economic situations of some, and the huge number of spinsters who missed the marriage train.”

Qasim Mozan, a researcher in the social investigation department in the Iraqi newspaper Al-Sabah, told Al-Monitor, “The Eastern man sees his second wife as his mistress and he plays this role with her, whether the marriage is for a short term or long. No matter how courageous a man is, he remains weak in the face of Eastern women's stubbornness and conservatism and therefore seeks the oasis of freedom that he finds in a second wife.”

Mozan believes the “Eastern man suffers injustice in his relationship with his wife, and thus most of them resort to a secret wife.”

For his part, Majid al-Kallabi, a sheikh from the Kullabiya tribe, told Al-Monitor, “This phenomenon is due to the financial ability that makes polygamy possible. The social environment promotes the likelihood of a second or even a third marriage. This phenomenon is widely spread in rural and conservative communities with a low educational level, more than in cities and among the educated social classes.”

Kallabi believes that “polygamy promotes the dignity of women by protecting them with marriage and preventing them from falling into sin and having to live alone without a breadwinner.”

Feminist and rights activist Alia al-Kadi told Al-Monitor that the practice is “humiliating for women and an arbitrary behavior in a patriarchal society.”