While more traditional families still insist that a woman must be a virgin before marriage, some men are questioning the custom. 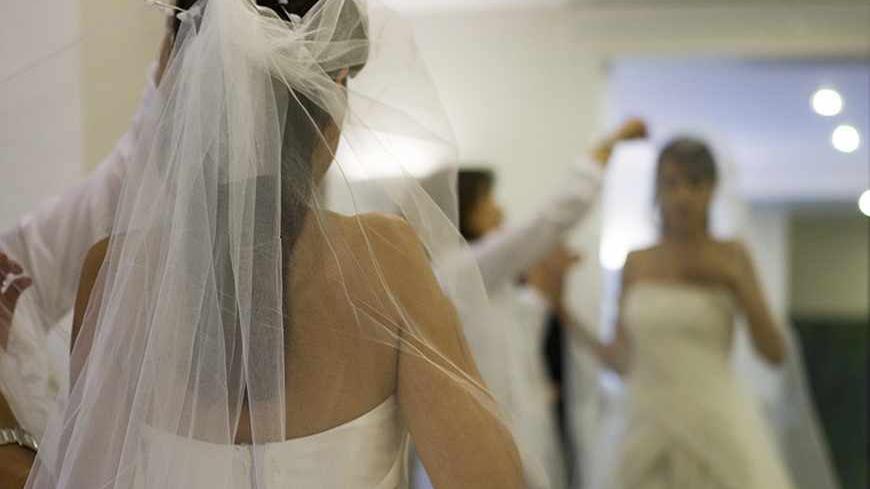 An Iranian dress designer checks the fit of a veil on a bride at a high fashion studio in north Tehran, Oct. 2, 2007. - REUTERS/Caren Firouz

Most traditional and religious Iranians, particularly those who live in smaller provinces, believe that women must save their virginity for marriage. Regardless of how sexually experienced the groom may be, ideally, the bride must be untouched.

A large number of middle-class and most religious affluent families remain faithful to the necessity of virginity at the time of marriage, and strongly believe in it as a principle to this day. Respected norms in social groups in Iran, however, have changed quite a bit and are in the process of even further change.

Women who desire to be sexually active prior to getting married are often times faced with the dilemma of preserving their hymen or enjoying their sexuality, especially if they live in traditional circumstances. There seems to be no question about some Iranian (and most observant Muslim) men’s overwhelming desire to be “the first one.”

Some young single women who engage in pre-marital sex undergo hymen restoration surgery; a generally uncomplicated procedure usually done in an OB-GYN’s office, reconstructing the broken hymen. The operation should, in an ideal situation, be done in a hospital, but since this is an illegal procedure in Iran, it must  be performed covertly. By the same token, this kind of surgery is costly and not affordable for many. Names and addresses of some doctors’ offices and private clinics where hymenoplasties are performed are available online, along with their approximate cost, and some people consult websites in their quest for a credible specialist to perform the surgical procedure on them.

In the past, some families would go the extra mile to make sure that the bride is, in fact, a virgin. There is a tradition that is now extremely rare in urban areas and somewhat uncommon even in rural parts of the country. On the wedding night, when the bride and groom would presumably engage in intercourse for the first time, a few of the groom’s close female relatives — usually slightly elder — would wait by the closed door throughout the sexual act. They would patiently await a bloody white cloth, which was the grand sign of virgin blood from the broken hymen. Controversy would erupt if it the cloth were not bloody, or even not bloody enough. A lot of people did not — and some still do not — know that there are various kinds of hymen tissue, and that some do not bleed when penetrated.

Some men have taken matters into their own hands and have sought out professional advice on their own. Anahid, an OB-GYN who has had a busy practice in Tehran for the past 12 years, told Al-Monitor that over the past five years, she has had four male inquirers making appointments with her to ask how to distinguish a genuine hymen from a repaired one, and three of the four had told her that her answer would be the key to keeping their fiancee and getting married, or calling off the engagement.

There are — albeit rare in urban areas — some families who would like to be certain about their bride-to-be’s virginity, so they take her to a doctor or midwife they know or trust to be examined and therefore verify the existence of her undamaged hymen. Some people take the bride to a forensic examiner of the Iranian Legal Medicine Organization for a “second opinion” to clarify the authenticity of a woman’s virginity claim; sometimes even despite a doctor’s affirmation. Some women take the extra step of treating the scar tissue of the hymenoplasty, and undergo laser treatments aiming at concealing the stitches and scars which may be a telltale sign if examined by a second doctor.

Azadeh, 28, whose wedding was called off three days before her wedding day, told Al-Monitor that ever since that fateful doctor’s visit more than two years ago, she has not had any suitors and even her parents are angry with her because they do not believe that she really is a virgin. All of this was because Azadeh’s hymen was defined as elastic, and the doctor warned the family that elastic hymens usually do not break; they just stretch, and there usually is not any blood as a result of the first penetration. Even though the doctor was a family doctor and seemingly trusted, the groom’s mother insisted on calling the marriage off. And the groom obeyed.

Trends and customs have changed however, even in rural areas where families tend to be more conservative and religious.

Marzieh, a midwife who works in a public clinic in a village near Tehran, told Al-Monitor that while she still has villagers who consult her on their bride-to-be’s virginity, such cases hardly occur nowadays; whereas they happened almost frequently two decades ago when she started working at the clinic.

Like many other taboo topics in Iran, the issues of virginity, preserving and reversing it are not discussed. An informal survey conducted by an online outlet (done only on men) shows that 92% of the participant men said they would leave their wife if her claim to be a virgin proved to be wrong, and 24% of this number would insist on knowing their spouse’s previous partners.

Some men have even reversed the trend by avoiding virgins altogether.

Babak, a 32-year-old civil engineer, told Al-Monitor that a claim of virginity — even if it is based on the truth — is a deal breaker for him when it comes to marriage. He said an unmarried woman in her 20s or 30s who claims to be sexually untouched is either lying and may have undergone reconstruction surgery, or is frigid. He said, “Worse than these scenarios — which are already bad enough — is that I cannot comprehend a normal, healthy young woman’s approach to virginity and her insistence on remaining a virgin. So I’d think something is off here.”

Even more religious-minded Iranians’ views are changing. Nassir is a 24-year-old religious man who runs his father’s successful business in central Tehran and says he is ready for marriage. In response to whether or not virginity is a significant element for making his decision about marriage, Nassir told Al-Monitor, “I think virgins in this day and age are dirty. I would much rather marry a normal girl with real characteristics.”

He then paused for a moment and added, “But my mother says I must marry a virgin. I thought of lying to my family in case I want to wed someone who is not a virgin, but then I thought my family would be really pissed off when they found out. I don’t want to piss them off. After all, they’re my family, not to mention that I make my living off my dad’s business.”