In Gaza and Egypt, men are seeking help from religious authorities and matchmaking services to persuade their prospective brides' families to lower financial demands. 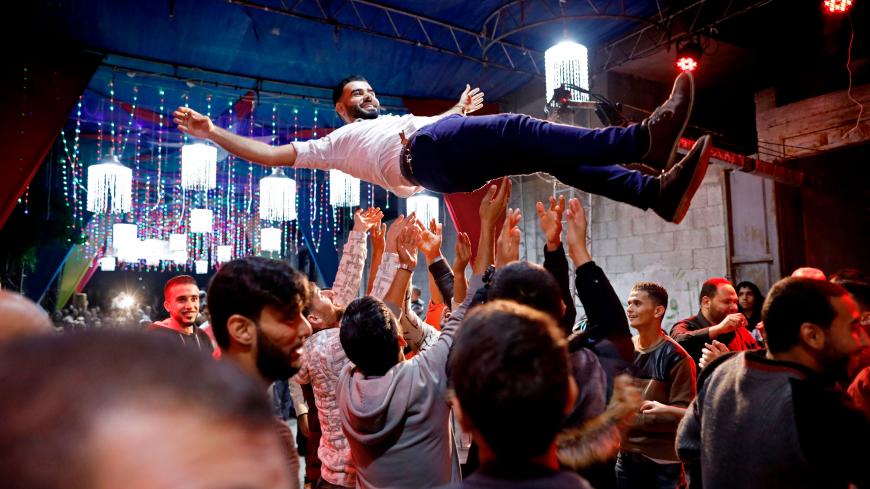 Even in the days of coronavirus, when big public weddings are banned, marriage in the Middle East is an expensive business, particularly for the groom’s family. Besides shouldering the ceremony costs, the groom is expected to pay a sum known as “mahr” to the bride.

Grooms are expected to pay this money in the Gaza Strip and other traditional parts of the Muslim world. “Mahr” comes from the Syriac word "mahra," meaning “bridal gift” and also “purchase-money.” While the word does mean “gift,” in Islam, it is part of the marriage contract. And though it is supposed to belong to the bride, in many countries, the bride’s family sets the sum and takes it.

Mohammad Yassar, a 35-year-old electrician from Rafah, had been trying to tie the knot for the last five years but has been unable to afford a mahr, let alone a luxury wedding.

“I gave up when a member of the family of the woman I wanted to marry told me that I could never find a wife if all wanted to spend was 1,000 dinars,” he told Al-Monitor. “He told me that sum was for buying tomatoes, not to get a wife.” The price for a wife, his mother was told, would be four times as much.

The average mahr demanded in the Gaza Strip, which is governed by Islamic laws and traditions, ranges from 3,000 to 5,000 Jordanian dinars ($4,231 to $7,052), depending on the young woman’s education and her family’s social status. The figures are far beyond the means of Yassar, who makes 700 shekels ($201) per month and lives with his parents in Rafah governorate in the southern Gaza Strip.

Fortunately for him, he came across a matchmaking service on Facebook. “Two weeks after I signed up, I married a young woman for a mahr of 1,000 dinars. My fiancée will live with me in my room at my parent’s house. We have yet to decide on the wedding date,” Yassar told Al-Monitor.

Behind the project is Mahmoud Kalakh, a biology teacher at al-Jinan High School in Khan Yunis, southern Gaza. He told Al-Monitor that he created the service last August after he read about Israel’s intention to facilitate the immigration of Gazans to Europe via Eilat Airport.

“I believe that poverty is the main reason for the migration of young people. They cannot get married, especially with the high cost of marriage in Gaza. The idea hit me and I posted about it on Facebook. On my page, we enable young women who do not demand more than 1,000 dinars to find a suitor who has scarce or limited income,” he explained. Another condition is that the brides are willing to live with their in-laws until the couples can afford to live alone.

On Oct. 20, 2019, Kalakh made a page for the initiative after receiving many requests.

Applicants fill out a personal form and send it Kalakh, who provides the names of three young women applicants. The parents of the suitors visit the young woman and if the young couple hit it off, they get engaged.

There have been 1,500 applications, 54% of them from women, and 100 wedding ceremonies have been held, most recently on Nov. 20. The service also helps them find affordable wedding halls. Before the wedding halls were closed due to the pandemic, Kalakh arranged discounted prices at 10 wedding venues for his couples.

Fatima al-Daama, a 32-year-old journalist with Mashreq News, told Al-Monitor, “I would agree to get married for a low mahr if my husband were a decent and good man. But to live under the same roof with my in-laws is out of the question. I’d rather stay single.”

“Living with one’s in-laws is not the best solution,” admits Kalakh. “But what are the alternatives when a 40-year-old man still cannot afford to buy an apartment?”

Hassan Al-Jojo, the head of the Supreme Religious Court in Gaza, said the bad economic conditions are the main reason so many young people are reluctant to get married.

“They do not have the bare minimum to hold a wedding ceremony, let alone start a family and build a future. Their priority is to survive. This situation greatly undermines the civil peace and the community security and leads to sexual encounters out of wedlock, which is not permissible in Islam," he said.

Egypt’s top religious authority Al-Azhar offers support for men who want to get married but have limited means. Earlier this year, Al-Azhar called upon families to reduce the high costs of marriage in an effort to lower the growing numbers of unmarried women.

Grand Imam of Al-Azhar Sheikh Ahmed al-Tayyeb said Jan. 21 that exhorbitant marriage costs “destroy the family before it is built," and "results in high levels of unmarried people.''

The push is part of the Al-Azhar International Center for Electronic Fatwas' efforts to address many social issues, particularly family-related ones, and spread Islamic awareness and teachings.

Economists and religious scholars have backed the campaign, saying that it is important to raise awareness about this issue across Egypt, especially in rural and underprivileged areas.

Parliamentarian Amna Noseir, a religious scholar, has praised the campaign, saying that she has repeatedly called for easing the demands on those who want to get married, saying women's families should only take into consideration the men’s morals.

Mohamed Abu Hamed, another parliament member, said that mahr and other marriage costs have been growing in Egypt despite the appeals of the government as well as some preachers and imams to abandon the practice to facilitate the marriages of young people.

“Some Egyptian families in poor rural areas ask the groom to buy about 100 grams of gold … as well as prepare an apartment with new furniture. Meanwhile, the woman’s family is required to buy the home electronic devices, which are very expensive,” he told Al-Monitor.

Al-Azhar is also planning to offer educational courses to combat the high costs of marriage.