Large numbers of Egyptians are unmarried, with many blaming a lack of money, so legislation has been proposed for a loan fund to help young people finance first marriages. 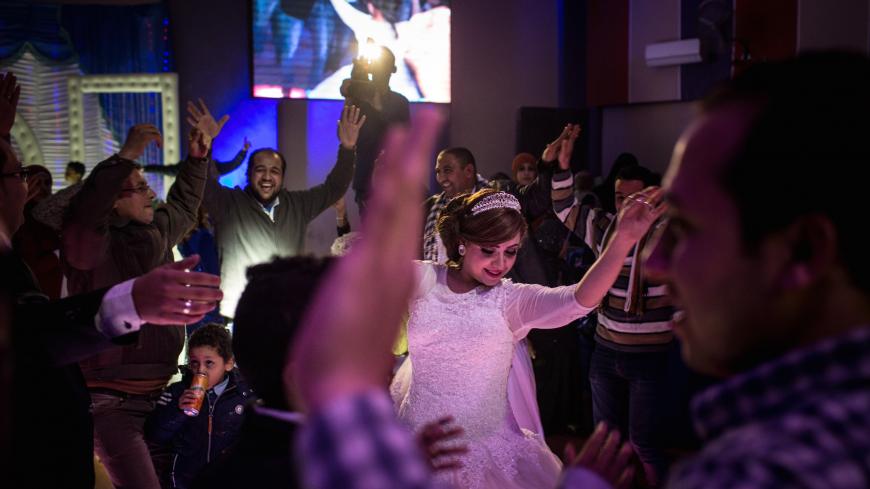 A bride dances during a traditional Egyptian wedding party on Dec. 18, 2016, in Cairo, Egypt. - GETTY/Chris McGrath

CAIRO — Before the current session of parliament wraps up in August, Egyptian legislators have the opportunity to make life a little easier for their young fellow citizens who would like to marry and start a family but find doing so economically prohibitive. The parliament's Youth and Sports Committee on Feb. 11 approved a bill drafted by Atta Salim to establish a government-administered fund to provide loans so young couples can afford to marry.

Karam Sabri, 30, a construction worker, told Al-Monitor that his daily wage does not exceed 150 Egyptian pounds ($8.50) and that such a small salary is insufficient to cover the costs involved in getting married. He blames the high cost of living for making his dream of marriage impossible. Sabri supports a marriage fund, in the hope that he can obtain a loan to get an apartment in one of Cairo's suburbs.

To get married, Egyptian men must provide a dowry to the bride's family, a wedding gift of jewelry for his wife and a place to live, in addition to paying part of the bill for furniture. Dowries range from 10,000 to 50,000 pounds ($570-$2,800) depending on the couple's social class.

According to the results of the 2017 general census, published by the Central Agency for Public Mobilization and Statistics (CAPMAS), 13.6 million Egyptians 18 years and older have never been married. The gender breakdown is 8.9 million males and 4.7 million females.

“The draft law includes 13 articles aimed at facilitating marriages in Egypt. It offers an immediate solution through legislation to the high prevalence of Egyptian men and women’s reluctance toward marriage,” Salim told Al-Monitor. “In light of worsening [economic] conditions, the government should help Egyptian youths with a loan extended under the terms of this draft law.” The fund would offer favorable loans of not more than 60,000 pounds ($3,400), repayable in monthly installments of 400 pounds ($23).

Salim stressed that the high number of unmarried people, especially women aged 40 and above — whom CAPMAS estimates to number around 800,000 — requires solidarity. “We do not want unmarried Egyptian women to miss out on the opportunity to exercise their right to motherhood,” he said. “The phenomenon of late marriage is one of the social problems, like the spread of sexual harassment, that must be resolved immediately.”

Shaimaa Tariq, 35, a government employee, told Al-Monitor that the older she gets, the less her chance of getting married and having children. “Men prefer to marry younger women, under the age of 30, to improve their chances of having kids,” she said.

As for actually obtaining a loan under his legislation, Salim explained that applicants must be male, at least 19 years of age and never have been married, or if married, only once, that being at the time of application. Those already married and seeking a loan to improve his family's living situation must submit an authenticated marriage contract entered into within the past six years. Widowers, divorced men and men with an outstanding bank loan are ineligible. Older men and lower-income wage earners are supposed to be given priority in obtaining loans, but no guidelines have been set.

Salim said that if a couple divorces after getting a loan, then the outstanding balance would become due within six months, but in the event of the borrower's death or total disability, the applicant would be exempted from repayment.

In statements to Youm7 on Feb. 15, Samir Batikh, the undersecretary of the Youth and Sports Committee, said he considers 23 to be the appropriate minimum age for obtaining a loan. He further requested a grace period of up to two years before a borrower begins repaying through installments, which should be set no higher than 400 Egyptian pounds ($23) per month.

Meanwhile, Abdel Hadi al-Kasabi, the head of the parliament's Social Solidarity Committee, said, “Empowering young people to work and increase productivity is better than giving them a marriage loan. Offering young people a loan instead of training them and improving their qualifications could lead them to prison.”

He told Al-Monitor that many Egyptians had started married life with loans, but were then unable to repay them and therefore ended up in jail. “These young Egyptians were not offered the proper training and qualification to keep up with the labor market,” Kasabi said. “I want young Egyptians to succeed in their work before thinking about getting married and taking on debt to do so.”

To ease concerns over the possibility of some borrowers not repaying the marriage loan, Salim said that loan default insurance could be secured from Egyptian insurance companies. He also remarked that the marriage fund would be administered out of the president's office, which will help ensure its financing and support.

Salim noted, “Article 3 of the draft law obliges all ministries and state institutions to cooperate with the marriage fund.” Each of them would allocate 5% of their budget from unallocated funds, According to Salim, the state will determine the number of loans per year, according to the fund’s budget.

Parliamentarian Amina Nasir told Al-Monitor that high prices and bad economic conditions have led many young people to refrain from getting married. She explained that the marriage fund could offer a solution to the phenomenon of late marriage in Egypt by offering financial support to them. She also asserted, however, that the proposed law would be useless without also raising awareness among parents — such as not demanding too much from a man in light of today's economic situation — and getting them to changing their traditional ideas about marriage.