Egypt's next national security threat: All the single ladies? 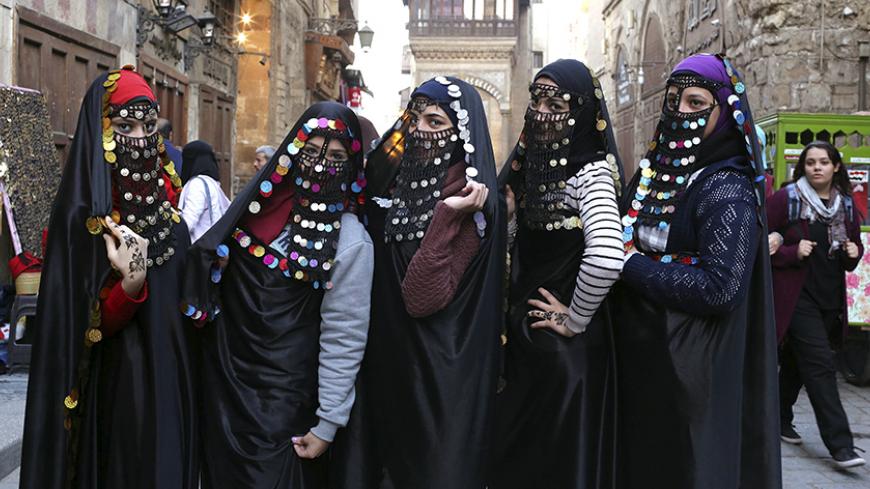 Girls dressed up in traditional Egyptian clothes pose for a picture on the historical El-Moez street of Islamic Cairo, Egypt, Jan. 17, 2016. - REUTERS/Asmaa Waguih

In a first of its kind in the history of the Egyptian parliament, the National Security Council announced May 3 that the "issue of spinsters” constitutes a national security issue that should be confronted. This has left analysts divided, with some arguing that it is a quintessentially social and economic — i.e., not security-related — issue, while others believe it poses a dangerous threat to the national security of the country.

Egypt suffers from a pressing social crisis known as "spinsterism." When a woman passes the age of 30 without getting married, it is viewed negatively by society. In some regions, such as rural villages and in Upper Egypt, the threshold age to qualify as a spinster may be even younger. Gloom reigns behind closed doors in many Egyptian homes whose families have been struck by grief and sadness because of society’s view of the spinster. She is often caught between the pity of her friends and malicious gossip of her enemies. And the older the woman gets, the more anxious her family grows and the more frantic their search for the sought-after husband. With the mediation of friends and family, they offer the girl as a candidate for marriage to a local young man in what is commonly known as a "salon marriage." The more unsuccessful this attempt to seal a marriage is, the worse the girl’s psychological state may be.

As the problem has escalated over time, the number of spinsters in Egypt now stands at more than 8 million, an estimated 40% of women of a marriageable age. Egyptian media outlets have begun to report on the issue, and the local film industry has recently produced a film on the subject, titled “Two daughters from Egypt.” With no visible change in Egyptian society, the crisis has now reached the parliament and a committee no one imagined would ever tackle the issue: the National Security Council.

Col. Ashraf Gamal, a member of the National Security Council, told Al-Monitor in this regard, “There is a phenomenon that has become an issue of national security, insofar as it constitutes a threat to the institution and stability of the Egyptian family, owing to the negative psychological effects it has on the family. Among its other negative ramifications for national security are the proliferation of crimes of rape and sexual harassment, which stem from sexual frustration or [people] entering into illicit [sexual] relations. As a result of this, another phenomenon — no less dangerous — has arisen: Egypt’s 'street children.' [And another consequence has been] the spread of theft in order to raise the necessary dowry payments required for marriage.”

Gamal said, “The current National Security Council has a new, unconventional vision. We believe that the concept of national security must be more broadly conceived than just what affects the army, the interior or homeland security. Our broader notion of national security is to not concentrate solely on the center and neglect the periphery that feeds the center. Everything — both small and large — that affects Egyptian society is the concern of national security. Our role will not be limited to the issues of spinsterism; rather, we have plans for the return of values and morals to Egyptian society. One might say, 'What business are values and morals of yours? You’re not responsible for society.' But to them I would say that if old Egyptian values and morals returned, the crime rate would decline. For example, the Egyptian woman used to wear whatever clothes she liked — whether they were short or provocative — without it resulting in sexual harassment. And that was because society was once blessed with values that — among other things — stipulated that a man would never accost women in the street.”

Gamal added that there are a number of representatives within the Legislative Security Committee who are working on studies and communications with all affected parties concerning the “spinster crisis.” They coordinate with a number of other committees in parliament, such as the Committee of Solidarity and the Family and Religious Committee. The goal is to cut to the core of the problem and enact legislation that can be implemented and will contribute to ending the problem of spinsterism.

Maj. Gen. Fouad Allam, the deputy of the State Security Service and former administrator of the Port Said security, rejected the suggestion by the National Security Council. He told Al-Monitor, “Spinsterism is a social and economic issue that must be dealt with through improving the social and economic conditions that encourage marriage — for example, [by providing] real work and inexpensive housing to young men whose value can be paid over long periods. Likewise, changing society’s culture in regard to the ballooning cost of dowries. [The solution is] not to enact new laws that cannot possibly be implemented.”

Allam added, “If the National Security Council intervenes in the issue of spinsterism under the slogan that it affects national security, then it must also intervene in the spreading phenomenon of divorce, which has a deeper, more corrosive impact on the Egyptian family and which is causing a generation of children to grow up under difficult circumstances. With 240 divorces every day, Egypt is now among the top-ranking countries in the world in terms of divorce rates — in other words, a new divorce every six minutes. This is what’s really affecting national security, without inspiring the committees concerned with national security stepping up to fight it. Instead they’re combating a phenomenon through specialists so that these committees do not deviate from their main role in defending national security.”

Abdelhamid Zaid, a professor of political sociology at Fayoum University and a former member of parliament, told Al-Monitor that the phenomenon of spinsterism has no relationship to national security. “There is a group of young men who cannot get on the marriage train at an early age — during a certain period — because of social and economic conditions that are tied to the decline in wages at a time when the cost of marriage is rising and basic expenses such as providing suitable housing and furniture are becoming more costly. This has laid the groundwork for other [social] disputes concerning matters like the cost of wedding ceremonies, electronic appliances and the gold [traditionally] offered to the bride.”

Zaid said that national security is a real issue and that 70% of voters lack basic reading and writing skills, and they elect people solely on the basis of their party’s symbol. (Egyptian ballots include an image of the party symbol for illiterate voters.) This results in the election of representatives who lack the ability to set priorities and do not know what the country needs at any given time. As a result, he said, proposals are put forth on issues such as the national security being threatened by spinsters at a time when society is fighting the threat of terrorism.