Several Egyptian groups have emerged to denounce locally made films they believe are degrading to women and to demand legislation to protect women. 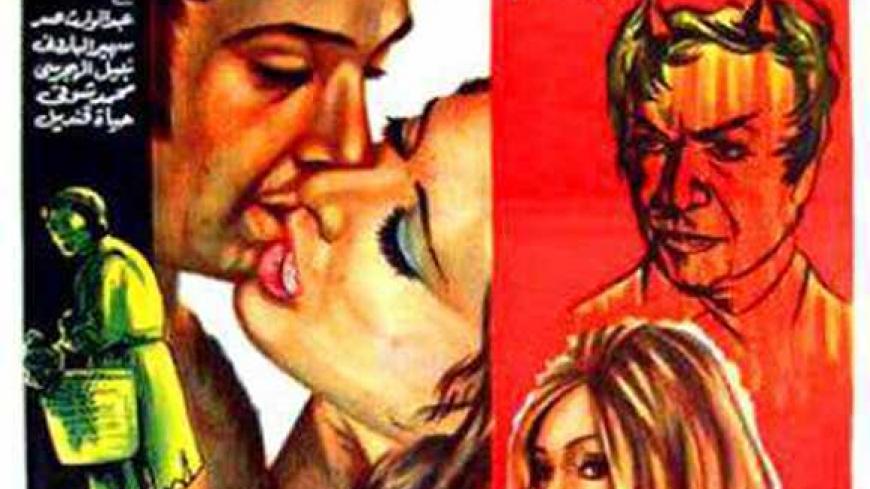 A movie poster is shown for the 1973 Egyptian Film, "The Woman that Overcame the Devil" - Facebook

Several rights groups have criticized the Egyptian movie industry lately. Calls for boycotting film screenings have spread on Facebook and Twitter to protest how Egyptian cinema is portraying women: by allegedly insulting them and legitimizing their harassment.

A group calling itself Shoft Tahrosh (Harassment Seen), which fights harassment of women in Cairo, has asserted that filmmakers have badly portrayed women in this season’s films, which were first screened during Eid al-Adha.

The group, via a statement released on its Facebook page, also said that some films deal humorously with the female body, legitimize harassment of women and discrimination, and justify anti-woman physical and verbal violence. The filmmakers do so by means of simple comedy films that the filmmakers think is harmless. Shoft Tahrosh said that such comedic scenes are not merely playful scenes that entertain the audience, but also suggest to the audience what is acceptable and normal. According to the group, just as cinema is influenced by reality, reality is also influenced by cinema.

The group stressed that it respects the film industry’s freedom, opposes government and popular censorship in any form and opposes banning films or deleting any part of any film. But the group called for an age-based movie rating system and asked filmmakers to take into account their responsibility toward children and how their films depict women and girls, especially in light of the dire situation of women and girls in Egypt, where women suffer sexual and domestic violence as well as and discrimination in public and private life.

In a related development, Egyptians on social media are increasingly calling for boycotting so-called “low-level movies” that Egyptian movie production companies release every new season, especially after the holidays. The Facebook campaign said that the movies now in theaters harm Egypt’s reputation, represent a “danger to public security,” and corrupt the mind because they are about bullying, belly dancing, and the lives of criminals.

On its Facebook page, a rights campaign calling itself Ikhrass (Shut Up) called on citizens to boycott a film produced by al-Subki film production company because the film has “low morals.” Al-Subki is one of Egypt’s largest production companies. Over the past few years, it catered to adolescents during Eid al-Adha.

Most of that company’s work is about young bullies who face problems and fall in love with temptresses. The films contain low-level folk songs and belly dancers, but no dramatic plot nor a purpose. Examples of such films are Aabdahu Mawtahu, Qalb al-Assad, Ish al-Bulbul, and al-Almani.

The company has been attacked by several campaigns, such as Together Against Degradation and Bullying and Egypt Is Not a Belly Dancer nor a Bully. The latter campaign blames al-Subki for causing the loss of an entire generation.

For its part, the National Council for Women in Egypt protested and condemned the screening of a range of what it called degrading and low-moral movies, stressing that those types of movies lead to increased and rampant rates of sexual harassment, a phenomenon that threatens the security and safety of Egyptian society. It denounced the ads broadcast by some TV and radio stations for movies that are offensive to the morals, principles and authentic values ​​of the Egyptian family.

The Council called on those responsible for the Egyptian film industry and the regulatory agencies to quickly intervene and take decisive action to stop the showing of those movies in order to preserve society’s values ​​and principles and to protect society from the rampant harassment phenomenon, especially since those types of movies are totally inappropriate for the country’s current political situation and transitional phase, which requires everyone to work hard and rally around the country’s interests.

That was confirmed by Maha Abu Bakr, a human rights activist and a member of the committee for the preparation of the Egyptian constitution. In an interview with Al-Monitor, she confirmed that there will be a constitutional provision protecting women from attack or from being considered a woman instead of a citizen.

Abu Bakr confirmed that the 50-member committee preparing the constitution is being asked to add clear constitutional provisions that protect women from violence in all its forms, whether harassment or abuse that is psychological, verbal, or physical. She added that the way movies are portraying women is not persecution per se, but is a reflection of the era’s artistic and cultural deterioration, whereby those who have money are those whose ideas become dominant.

Actors Syndicate head Ashraf Abdul Ghafur said in a discussion with Al-Monitor that most films recently shown in Egyptian theaters both in the Eid al-Adha or Eid al-Fitr seasons are of a commercial nature and were not intended to be insulting toward women or anyone else. He said the films are a result of the chaos pervading Egypt. He explained that film production has three components: art, production quality, commercialization, and that those films miss the art and production quality components, and rely on just commercialization.

Abdul Ghafur called on the state to intervene and shoulder its responsibility in promoting the film industry so that there won’t be a monopoly by privately produced films when Egypt is living under conditions of instability. He said that this situation forces producers who present Egypt’s concerns and problems to retreat and leave the playing field open to businessmen who wear the mask of producers and make ugly films that don’t represent the Egyptian people and that aren’t consistent with the Egyptians’ teachings, principles, aspirations or upbringing. He said that what Egypt needs is for movies to be the memory of this phase. He said that Egypt is living through a stage of weak security and unethical behavior, and that the present phase should go down in history as a black period for Egypt.

Despite all the Facebook campaigns and the government campaign through the National Council for Women in Egypt, the quality of these films, which make a hero out of a bully and legitimize violence and harassment against women, still dominate movie theaters and enjoy a large audience among adolescents.