The severe security situation in Egypt seems to have had little effect on movie theaters, which have enjoyed high turnout this summer in spite of spiking rates of terror attacks. 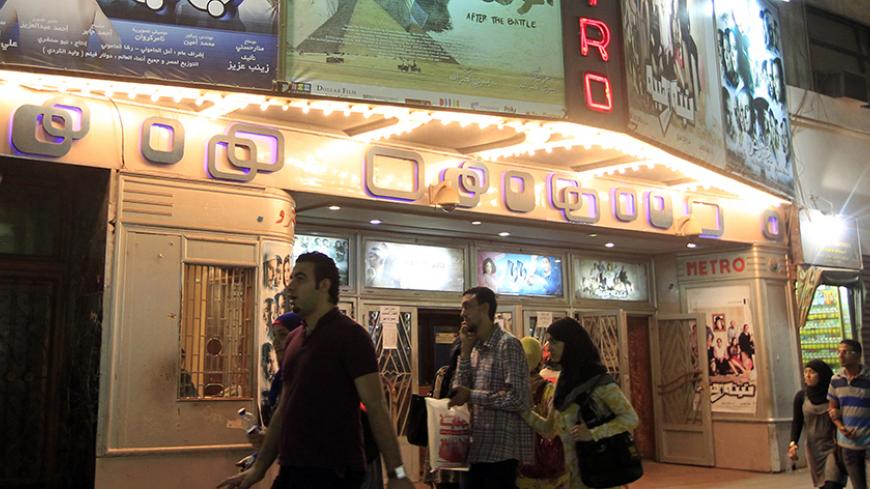 All five movies had high production costs amounting to approximately 84 million Egyptian pounds (about $10.5 million) in total. The Egyptian state did not contribute to the funding of any of them, despite producers’ concerns before Eid al-Fitr over possible low turnout because of the large number of terrorist operations that plagued the country during Ramadan. Chief among those was the bombing of the Italian Consulate in the center of the country July 11 as well as the assassination of Attorney General Hisham Barakat on June 29. There was also the July 1 attack on the Egyptian armed forces in North Sinai by Wilayat Sinai, in addition to the targeting of theaters — the Radubis Cinema on Al-Haram Street in Giza was bombed twice. The first theater attack occurred in January 2014 and killed one person, and the suspect accused of bombing the cinema confessed to being linked to Wilayat Sinai and said that targeting theaters is designed to kill the police officers guarding them. The second bombing occurred July 17, 2015.

Despite the danger, theater owners decided to open their doors to benefit from the Eid al-Fitr holiday season, typically a profitable one. According to Hani Abdel Fattah, head of studios and theaters for the Egyptian Sound, Light and Cinema Company, the public continued to gather in cinemas to watch movies despite the bombing attempts.

Filmmakers were badly impacted by the terrorist attacks and their negative effects on the film industry, as the public grew fearful of going to theaters. However, theater managers insisted on returning to work in January 2014 to stand in the face of terrorist operations — specifically after the bombing of the Radubis Cinema.

Several new movies were released in February 2014, but revenues were disappointing, not exceeding 5 million Egyptian pounds ($640,000).

This year, however, despite the similar circumstances and even increased terrorist operations, specifically during the month of Ramadan, Eid al-Fitr movie revenues rose against all odds. Sherif Mandour, vice president of the Film Industry Chamber, told Al-Monitor that revenues exceeded 25 million Egyptian pounds ($3.2 million) during the eid (a span of four days) and are still climbing, according to a survey conducted by the Film Industry Chamber.

Mandour said, “Most audience members are teenagers and youngsters, who are usually courageous and love to go out and watch new movies despite terrorist operations.”

On the state of movie theaters after Eid al-Fitr, Mandour said that despite the holiday being over, films have been kept in theaters longer thanks to unexpectedly high turnout. “Al-Khalbout,” starring Ahmad Rajab, was released July 29. Mandour stressed that revenues did not fall after the holidays and movie theaters have a constant influx of attendees.

Tarek el-Erian, producer and director of “Awlad Rizk,” which is now showing in Egyptian theaters, said that Eid al-Fitr movie revenues were higher than last year’s season despite the heightened terrorist operations. He said, “The Egyptian people became accustomed to terrorism and want to continue their lives and celebrate holidays,” and added that the “good quality” of movies that are now showing has encouraged the public to attend.

In the vicinity of central Cairo, near the Italian consulate that was bombed in July, Mohammed Abdul Qader waited with his family in front of Cinema Miami to watch a movie. He did not seem concerned about the incidents that had rocked the country during the month of Ramadan or the bombings that occurred in central Cairo, such as the bombing of a courthouse in March that resulted in the death of one person and the wounding of three others.

Abdul Qader said that he decided “to watch new movies after a hiatus of two years due to violence and bombings,” and pointed out that he had waited for Eid al-Fitr to end to avoid the danger of large gatherings.

Imad Jalal, head of Cinema Miami, confirmed that he did not expect “this high turnout in Eid al-Fitr because of the repeated acts of violence in the month of Ramadan.” He added that the Egyptian people “insist on challenging terrorism and violence.”

Jalal pointed out that theaters in central Cairo took tight security measures that prevented viewers from leaving the theaters during show times. Also, viewers were required to show their ID cards at the ticket booth. He said, “These measures also included electronic gates at the entrances to the theaters and the inspection of citizens before entering.”

Jalal described holiday movies as “very good compared with past seasons,” and said, “Sessions start at 12 p.m. and end at 3 a.m. because of the high turnout that continued until after the end of Eid al-Fitr.”

Professor Nabil Abdul Khaliq, the head of the Foundations of Education and Social Sciences Departments at Suez University, said, “Egyptian citizens, by default, love challenges and cannot refrain from going out because they are highly sociable, and no terrorist operations can scare them. For example, when residents of the Abbasid area in Cairo found a makeshift bomb, they did not flee. They stood there and watched as the bomb was being dismantled. Such situations occur so often in Egypt, and people are flocking to theaters knowing that a theater was bombed on the first day of Eid.”