While Muslims all over the world observe Eid al-Fitr, the New Year celebration of Nowruz remains the key marker of Iranian cultural identity. 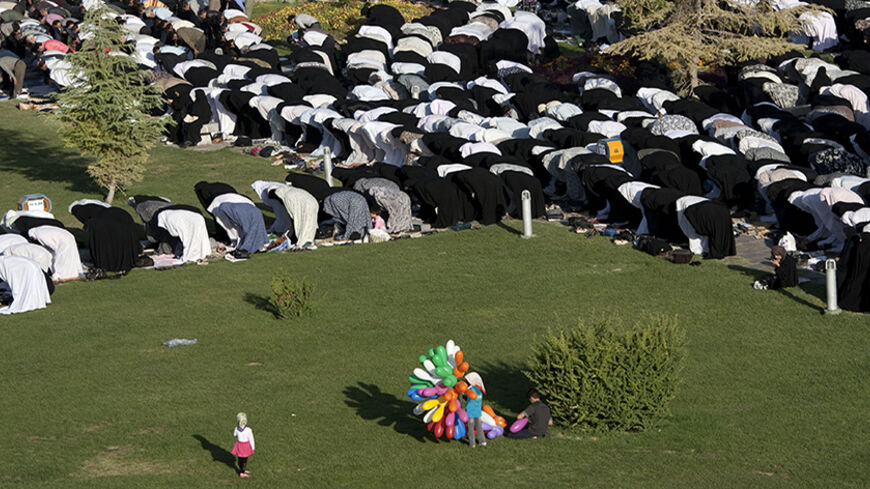 Iranian vendors inflate balloons as a girl observes women kneeling in prayer at the historic Naqsh-e Jahan Square on the first day of Eid al-Fitr in Esfahan, Aug. 31, 2011.

Eid al-Fitr is the most important Muslim festival and has the same standing in the Muslim world as Christmas does in the Christian world. It is widely celebrated in the Muslim world and leaders of non-Muslim nations, including the president of the United States, send their well wishes to Muslims on the occasion of Eid al-Fitr.

Eid al-Fitr is the celebration marking the end of the month of Ramadan, looked upon as a reward from God after the month of fasting. It is similar to Easter since both of these celebrations happen after a long period of fasting. In both Christian and Muslim societies, there has been a change in the nature of these two celebrations as they are transitioning from a religious celebration to a cultural one. In such instances, the religious roots are gradually forgotten and are being replaced by cultural symbols.

We can see the signs of this shift from the way Muslims mark the occasion of Eid al-Fitr. A large number of Muslims, both inside and outside of the Muslim world, happily celebrate Eid al-Fitr without having fasted during Ramadan. From a religious point of view this makes no sense, since this celebration is meant to be a reward for those who have fasted during the month of Ramadan. The presentation of this phenomenon varies in different societies. It is perhaps most evident among the Muslims living in the West, where Ramadan and Eid al-Fitr are part of the cultural identity of these Muslims and go beyond the individual religious obligation to fast during the month of Ramadan.

Inside the Muslim world in areas such as Lebanon, where there is more religious freedom, this change is quite evident. However, in countries such as Iran and Saudi Arabia, which are governed by religious establishments, people are obliged to pretend that they are fasting while in public. Therefore, if there are any changes, they go unnoticed. Nonetheless, we can see these changes in the outside layers of these societies as well.

The main reason for this phenomenon is that Iranians have a deep interest in connecting Islamic rituals to their own ancient Iranian cultural markers. As such, they tend to identify with aspects of Islamic culture that can be best celebrated within an Iranian cultural context. At the same time, for the same reason, Iranians have Islamicized part of their ancient culture to merge these two aspects of their identity. This has happened with Nowruz, which, though it has roots in the ancient Iranian religions, has become a national celebration with Islamic coloring.

Another controversial issue related to Eid al-Fitr is determining the exact moment of its occurrence. Since the Islamic calendar is lunar instead of solar, the day of the Fitr changes each year. According to certain Islamic legal thought, viewing the new crescent moon in the sky is the sign that Fitr has started while for followers of the other branches of Islam, astronomical calculations are enough and there is no need for the crescent moon to be visible. This has resulted in Eid al-Fitr being celebrated on different days in different countries. In Saudi Arabia and the United Arab Emirates, for instance, Eid al-Fitr was announced for Monday, July 28. In Iran, Eid al-Fitr was announced for July 29.

Emergence of cultism in recent years has resulted in this issue being used as another point of conflict between Shiite and Sunni Muslims. From time to time, Sunnis accuse Shiite Muslims of separating themselves from the body of the Muslim world by celebrating Eid al-Fitr on a different day. This conflict has extended to different branches of Shiite Islam as well. Certain contemporary religious authorities such as the late Sayyed Mohammed Hussein Fadlallah (1935-2010) have said that astronomical calculations are enough and usually consider Eid al-Fitr to be on the same days as the Sunnis believe it is. As a result, radical Shiite groups accuse them of being Sunni-influenced.

All these changes are testaments to the fact that these religious celebrations have gone beyond the religious layers of societies to become a cultural identity marker above all else.