How rotten fish became a favorite delicacy in Gaza

On the first day of Eid al-Fitr, Gazans buy and eat a salted and fermented fish called fesikh, which has a long tradition in the Gaza Strip. 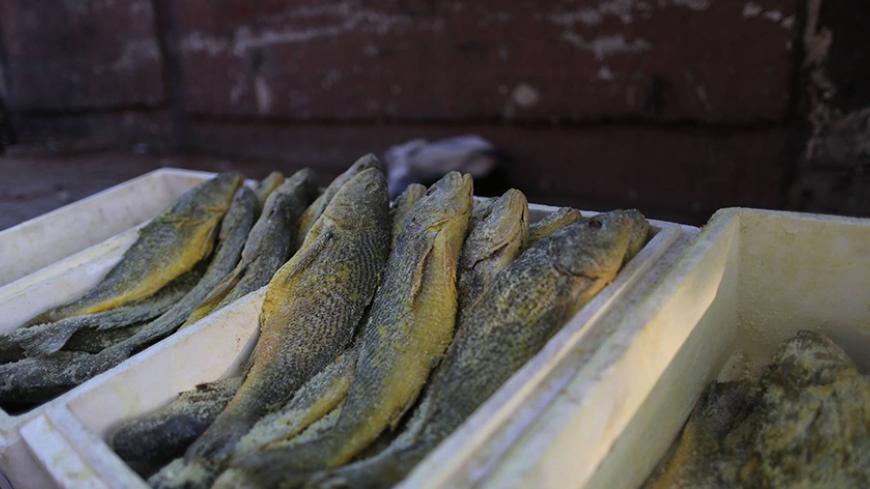 GAZA CITY, Gaza Strip — Gazans have become accustomed to eating salted fish such as fesikh on the first day of Eid al-Fitr, which marks the end of the month of Ramadan. Different types of fesikh are sold in the market during the last 10 days of Ramadan. Gazans believe that fesikh detoxifies the stomach because it contains large amounts of salt, which they believe is beneficial after a month of fasting. The women, who wait for their husbands and sons to return home from the Eid al-Fitr prayer in the early morning, fry the fish with garlic and tomatoes, the smell of which fills the alleys, streets and towns in the Gaza Strip.

Fisherman Ismael al-Amoudi said this popular dish dates back to the 1960s when the Egyptians ruled Gaza. At the time, he said, Palestinian fishermen from Gaza would fish with their Egyptian counterparts in Egyptian waters.

“We would stay three days at sea to fish with Egyptian fishermen. We did not have any freezers to put the fish in, so the Egyptian fishermen would salt the fish to preserve it and then soak it in water before cooking it for the Sham Ennisim holiday [Egyptian holiday marking the first day of spring],” Amoudi told Al-Monitor.

During Sham Ennisim, which falls on the day after the Eastern Christian Easter, Egyptian families traditionally go out to public gardens and parks and eat special meals that most notably includes fesikh with eggs.

Asked how fesikh is prepared, hajji Umm Raed Ismail told Al-Monitor, “Originally we salted the fish for preservation purposes. We would salt it, wrap it in a thick cloth and bury it in the ground for 40 days. Once we were ready to eat, we would take it out, soak it in water, fry it and serve it with tomatoes, peppers and garlic. However, fishmongers now put the fish in barrels full of salt a few days before the start of Ramadan.”

Mohammed Brais, a popular fishmonger who sells fesikh in the city of Khan Yunis, told Al-Monitor, “I sell about 300 kilograms [660 pounds] of fesikh every Eid, and I sell whatever is left on the second and third day of the holiday. People continue to buy fesikh until the morning hours of Eid before going to perform their prayers.”

He explained that certain types of fish are used for fesikh, such as mullet, meagre and gilt-head bream, which are sold throughout the year but mainly right before and during Eid al-Fitr.

Regarding the price of fesikh and people’s preference for local fish rather than imports, Yasser Radi, owner of a grocery store that sells fesikh in al-Amal neighborhood west of Khan Yunis, told Al-Monitor, “We buy imported fesikh soaked in water, and we make local fesikh using frozen meagre. But people prefer the local rather than imported fesikh as a kilogram of fesikh made with meagre costs about 25 shekels [around $6.50].”

Mohammed al-Jokhbir, a Khan Yunis resident, told Al-Monitor, “Fesikh is an essential dish on the first day of Eid al-Fitr — it is a popular dish. It contains a high amount of salt, but it is only served once a year as a traditional dish that people eat only during Eid. Both children and adults like it.”

Hasan Abu Hida, from Khan Yunis refugee camp, told Al-Monitor, “I buy frozen meagre and I prepare the fesikh at home a few days before Ramadan.”

Some people in Gaza do not like to eat fesikh on the morning of Eid al-Fitr, either because of the high amount of salt it contains or because of its pungent smell. They either resort to the clupea fish, which is smoked and low in salt, or to the sommaqiyya, which is a popular dish made of spinach beet, chickpeas, meat and flour.

In this vein, Akram al-Zatma, who makes smoked clupea at his home in Rafah, told Al-Monitor, “There is a high demand for clupea as an alternative to fesikh. Clupea is low in salt. We buy frozen mackerel and marinate it in salt overnight, then wash it and put it between metal sheets. We then make a fire using small pieces of wood and let it simmer for six hours until cooked.”

He said that extended families need at least 5 kilograms of clupea or fesikh for the Eid al-Fitr meal. However, the high price, novelty and unusual taste of the smoked clupea are reasons people choose fesikh instead. A kilogram of clupea imported from Israel costs 40 shekels ($10.50), while the price of local clupea is 25 shekels ($6.40) per kilo.

Mohammed Mannah, a general physician who works at the Dar al-Hikmah hospital in central Gaza City, warned against the danger of eating a lot of fesikh on the first day of Eid al-Fitr due to the health problems that this may cause. Patients come to the hospital complaining of stomach pains or high blood pressure.

He told Al-Monitor, “There is a large amount of salt in fesikh — which directly raises blood pressure, especially in the elderly — and fesikh causes stomach pains. We cannot ban this popular dish, but we can warn citizens against eating it in large amounts."

Asked to give health tips to citizens during the holiday season, Mannah said, “Fesikh should not be consumed in large quantities and it should be bought from a trustworthy place. People should not drink a lot of water or eat a lot of sweets after eating fesikh as this may cause diarrhea and a sudden rise in blood pressure.”

Despite the medical warnings against the consumption of fesikh, it remains a popular dish served as part of almost all of the Eid al-Fitr meals in the Gaza Strip. People are passionate about it, and they share ways of preparing it during visits to relatives and friends.