Gazans have the hots for chili peppers

Peppers — pickled, roasted, stuffed or mashed — make up an essential part of cuisine in Gaza, and for prideful Palestinians in the Strip, the hotter the better. 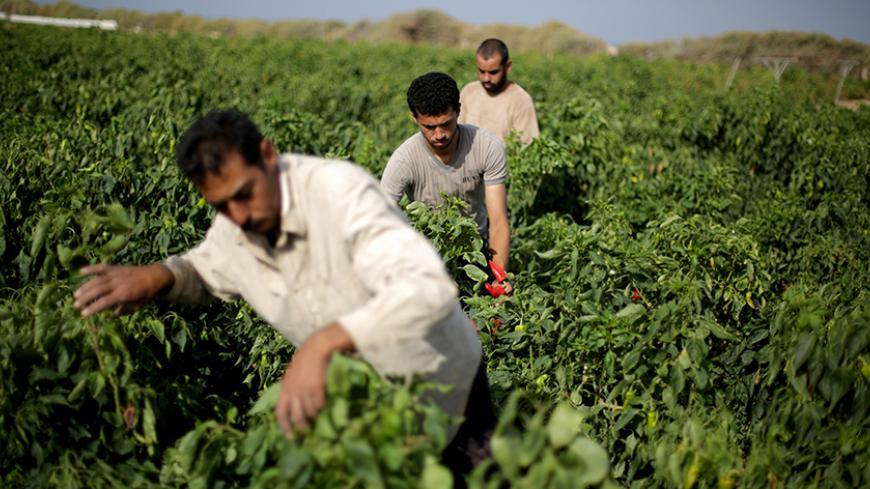 GAZA CITY, Gaza Strip — No Gazan table is complete without peppers that come in various shapes and sizes. Green and red chili peppers are often on the table, ready to be consumed with flatbread. Pickled yellow peppers or roasted bell peppers — yellow, green and red — accompany grilled meat and shawarma. Meanwhile, other chili peppers in the form of flakes, powder or a paste are used for spicing up fava beans.

The Gaza kitchen, which has become increasingly familiar in Europe and the Unites States, is a variation of Levantine cuisine. Compared with other regional cuisines, however, it uses more seafood and spices, particularly chili peppers. One of the best-known dishes prepared for holidays, sumaghiyyeh, is made with ground sumac, first soaked in water and then mixed with tahini, a sesame seed paste. Then it is cooked with pieces of slow-stewed beef, beans and seasoned with dill seeds, chili peppers and garlic. Fukharit adas, a wholesome family meal for Gazans, is a slow-cooked lentil stew flavored with crushed dill seeds, garlic, cumin and red pepper flakes. Stuffed bell peppers also form part of the traditional home cuisine in Gaza, Egypt and Turkey.

"Peppers have been part of our diet and our culinary culture in Gaza for many years," said Atef al-Assouli, a professor of social sciences and family counseling at Al Quds Open University in Gaza. "People eat them fresh, roast them, pickle them, make them into hot chili pastes or grind them, according to the type.” He said that when people go to most restaurants, peppers are often present on tables in a variety of forms. It is common to hear customers tell waiters, "Bring more peppers," Assouli said.

"People in Gaza take pride in eating chili peppers — the hotter the better for boasting,” he said.

Zuhair Shurrab, 52, owner of a restaurant that serves falafel and cooked fava beans in the city of Khan Yunis, told Al-Monitor he buys mashed chili peppers from farmers every day. “People use up to five spoonfuls of mashed hot pepper in a small plate of fava beans,” he said.

Nizar al-Wahidi, director general of the Ministry of Agriculture in Gaza, told Al-Monitor that Gaza produces 5,000 tons of chili peppers, all of which are used for local consumption. It also produces 2,660 tons of sweet bell peppers, approximately half of which are exported through Israel. The ministry says Gazans consume between 6,300 to 6,500 tons of peppers annually.

He said the cultivation of sweet bell peppers and chili peppers is of major importance to the local economy in Gaza, as many people work in the pepper fields.

Haj Abu Mohammed al-Samouni, 68, from the Shajaiya neighborhood, is a father of 10. Every year he purchases 40 kilos (88 pounds) of red chili peppers. He grinds and stores them, selling some of the product in his small shop.

He said the hot pepper eating tradition is not without risks, “Many people in Gaza suffer from excess acidity and indigestion because of the heavy consumption of hot peppers. When I was a child, I used to eat chili peppers with bread and olive oil as a separate dish. We take pride in eating hot peppers. This has been the custom,” Samouni said.

They contain high amounts of vitamin C as well as beta-carotene, which turns into vitamin A in the body. Peppers are also a source of vitamin B, iron, magnesium, potassium and can be beneficial to digestive health. Peppers also can relieve migraines and be beneficial to cardiovascular health.

Rami al-Barim, 33, is the owner of an agricultural nursery east of Khan Yunis. He is always on the lookout for new hot chili pepper plants, as they are in high demand and people are eager to grow these plants at home, often for decoration.

Despite the high demand for hot chili peppers, it is the sweet peppers that are more expensive. One kilo of sweet peppers cost $1.50 as opposed to a quarter of a dollar for one of hot peppers. Therefore, Omar Saydam, a 39-year-old farmer in southern Rafah, has shifted to growing sweet peppers despite the scarcity and salinity of water.

Although peppers are consumed in large quantities in Gaza, their cultivation faces many hardships, namely power outages. Farmers stay up late at night waiting for the electricity to irrigate their plants. Salman al-Astal, a 62-year-old farmer in west Khan Yunis, told Al-Monitor, “The production this year is lower than the previous ones, in light of the acute water crisis in Gaza. This is not to mention the long power outages, which mean fewer hours of irrigation and thus less production. I stay up until dawn sometimes, waiting for the electricity to return so that we can turn on the water pump to irrigate the crops."

Astal called upon the Ministry of Agriculture to take action to provide farmers with water and electricity, especially in Khan Yunis and Rafah, where the soil is most fertile and suitable for growing peppers.