Although Israel imposed economic restrictions on agricultural exports from the Gaza Strip in 2007, Shmita offers Gazan farmers an opportunity to export vegetables to Israel, as the Israeli land is left to rest. 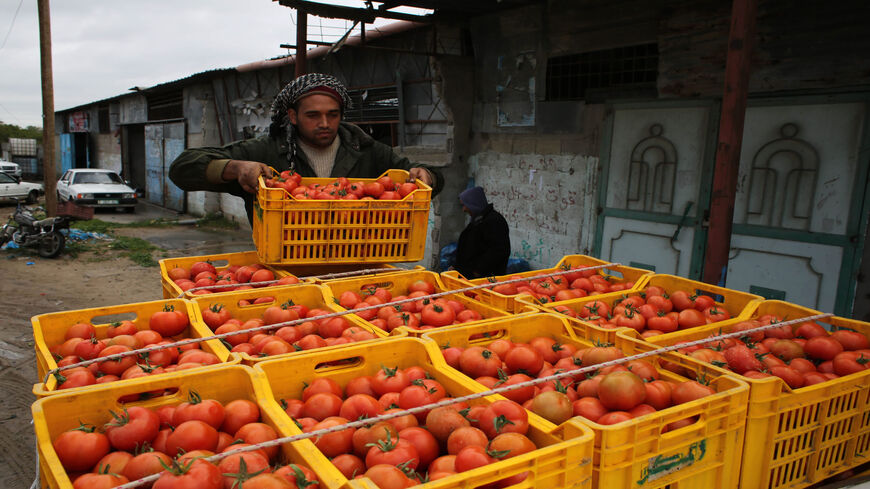 GAZA CITY, Gaza Strip — Palestinian farmers harvest cucumbers in the southern Gaza Strip in the early morning hours. Islam al-Nuweiri, a Gazan farmer and merchant, will export them to Israel, where the Israeli authorities allowed, for the first time in February, the import of new types of vegetables from Gaza to meet the Israeli market’s needs during Shmita, the Sabbath year.

Every seven years, during the year of Shmita, observant Jews refrain from eating vegetables and fruits that are sowed and harvested in their own lands. Instead, they are permitted to eat crops from non-Jewish land. Jewish law prohibits farming, planting, plowing, pruning and harvesting during Shmita, which started on Sept. 7, 2021.

During Shmita, the land is left to rest and no agricultural activity is allowed. Other techniques such as irrigation, fertilization, weeding, spraying and mowing can be used as a preventive measure, but not to improve growth. Any fruits or herbs that grow on their own can be donated to the poor.

He told Al-Monitor, “Israel has allowed us to export new types of vegetables this year, because observant Jews stopped cultivating their lands for a one-year period. Shmita takes place once every seven years during which they keep their land to lie. This offers us a good opportunity to export vegetables to Israel.”

He said, “During Shmita, the Israeli authorities allow the import of vegetables from the Gaza Strip, the West Bank, Jordan and even Turkey, which is beneficial for Palestinian farmers and others.”

He noted, “This year offers a good economic recovery for farmers and agricultural workers in Gaza. Farmers are working to increase their crops by 40% compared to the past years, so as to avoid shortages in the local market.”

Nuweiri pointed out that the quality of vegetables must be tested in a laboratory in Tel Aviv before being imported from Gaza.

Mohamad Salam, a farmer from Khan Yunis, told Al-Monitor, “The Israeli decision to allow the import of vegetables is a good opportunity for us. We work day and night to meet the local market’s needs, where prices are very low. After they [Israeli authorities] allowed the exports, the price of a kilo of tomatoes and cucumbers increased in Gaza, which brought us good returns.”

Salam, who works in the agricultural field, is the sole provider for his family of four. Agriculture is the only sector where he has been able to find work, due to the high unemployment rates in the Gaza Strip.

Ashraf Shehadeh, an exporter to Israel, told Al-Monitor, “The year of Shmita brings economic benefits to the farmers in Gaza. We are currently exporting new agricultural crops, which were prohibited before, to the Israeli market.”

He said, “Only tomatoes and eggplants were allowed to be exported from Gaza [during previous Shmita years]. But this year, Israel allowed the export of new types of crops, including cucumbers, zucchinis, hot peppers, cherry tomatoes and sweet potatoes.”

Shehadeh pointed to the local obstacles that impede the freedom of export, noting, "But the government in the Gaza Strip is the one that determines the quantity that can be exported from Gaza. An export quota has been set for each type of vegetable, so that the prices of these vegetables do not rise on the local market and subsequently anger the consumers.”

He added, “Gaza was hit by a severe cold wave [this winter], which affected agricultural production and hindered exports. But exports to Israel are expected to increase in the coming weeks, as the weather gets better and the production as well.”

Shehadeh said, “In general, there are several restrictions. Israel only allows limited quantities of tomatoes and eggplants to be imported per month from Gaza.”

Speaking on condition of anonymity, an official at the Gaza crossings department, which is affiliated with the Ramallah-based Palestinian government, told Al-Monitor that merchants in the Gaza Strip were informed in January of the Israeli decision to allow the import of new types of vegetables from Gaza.

He said that the decision is a good opportunity for Palestinian farmers in Gaza, despite the Israeli restrictions imposed on farms limiting exports to specific quantities and types of vegetables, depending on the Israeli market’s needs.

The source pointed out that there are many other Israeli requirements imposed on Gazan farmers. He noted, “In July, Israel requested to remove tomato crowns before exporting them to the West Bank and Israel, which burdens the farmer who will have to pay workers additional money. Instead of harvesting 5 tons of tomatoes per day, the workers were able to harvest only 2 tons as they had to remove the crown of the plant, which also affects the lifespan of tomatoes.”

The Palestinian Ministry of Agriculture in Gaza had a different opinion. The ministry’s spokesman, Adham al-Basiouni, told Al-Monitor that the Israeli decision allowing Gazan farmers to export more vegetables during Shmita is not part of Israel’s goodwill gestures toward Gaza. He believes the decision is a measure that depends on the mood of the Israeli authorities.

Basiouni called for the need for Israel to lift the siege and allow free movement of goods from the Gaza Strip without restrictions.

He concluded, “Israel imposes restrictions on [Gazan] exports that are impossible to meet. It determines the types [of vegetables] that can be exported and prevents the entry of [other] materials, which violates the rights that the Palestinians should enjoy.”