Agriculture in Gaza is suffering after the Israeli decision to ban vegetable exports from the Strip to the West Bank. 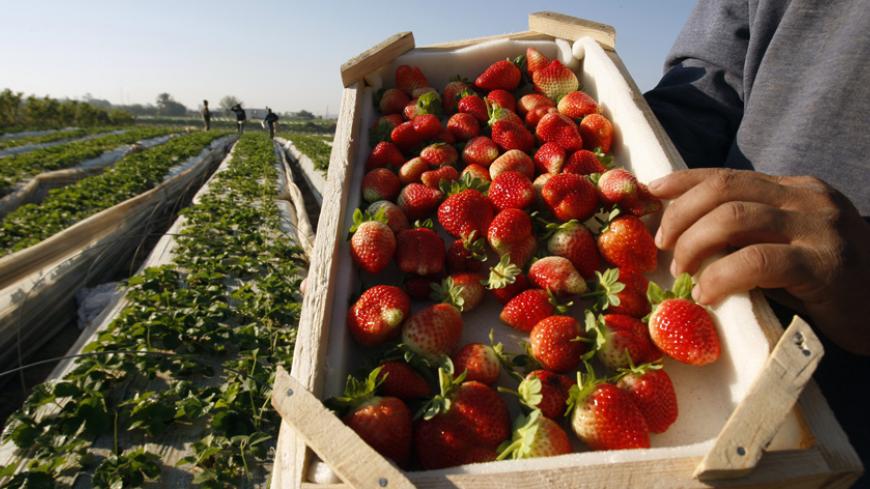 A Palestinian laborer holds up a box of freshly picked strawberries, intended for export, on a farm in Beit Lahiya in the northern Gaza Strip, Dec. 7, 2011. - REUTERS/Ibraheem Abu Mustafa

RAFAH, Gaza Strip — Gaza’s farmers have increasingly suffered since the Israeli siege was first imposed in 2006. Despite the Ministry of Agriculture’s announcement of self-sufficiency, the fluctuation of international support and Israel preventing the exportation of agricultural products have destroyed the only source of livelihood for farmers, especially after the recent war.

In the western part of Rafah, in the southern Gaza Strip, Israeli reconnaissance planes never stopped their sweeps over the vast agricultural land, where only one farmer was planting flowers. Al-Monitor's correspondent handpicked the last of the clove flowers that once flourished in the Strip — which was famous for exporting flowers around the world — before the farmers stopped planting them due to the lack of Dutch support for this year.

Notably, the cultivated flowers here are not up to the international standards and flowers are now worn out cuttings from an Israeli mother-plant as farmers cannot buy seedlings. Some are cultivated for the domestic market, where the demand for flowers has significantly decreased as a result of the deteriorating economic situation.

The director of the Marketing Department at the Ministry of Agriculture, Tahseen al-Saqqa, told Al-Monitor, “The Dutch government was implementing a project to provide farmers with seedlings and the necessary supplies for the cultivation of flowers, at a rate that was being reduced every year since 2010. However, the support completely stopped this year and the farmers could no longer afford the costs, so the cultivation of flowers ended.”

Farmer Ziyad Hijazi said during a tour west of Rafah around his own shrinking fields, “Years ago, I used to walk around 100 dunams of flowers. I used to supervise dozens of workers and prepare to export my production. That has all vanished today.”

Hijazi, who is now in economic distress and accumulating debt, now rents only 20 dunams. He uses 19 to grow vegetables, instead of flowers, for the local market. He sells them at a cheap price that is barely enough to feed his children. He is currently using the last dunam to plant cloves, the last such field in the Strip of a once prosperous trade.

Hijazi believes that growing flowers is pointless. “In the early years of the siege, when the crossings were closed and we could no longer export, I fed the sheep the flowers I was supposed to export, and whose quality was 10 times better than the ones we have today,” he explained.

Saqqa pointed out, “The Gaza Strip used to produce on more than 600 dunams 50 million flowers for export each year before the blockade, and 150 million flowers a year during the blockade. But this year, there are no more than five dunams planted for domestic consumption.” He added, “The Dutch support was the key factor for our flower agriculture, until it stopped this year. We can no longer grow without support and even if we do, we cannot afford the high costs without exporting, due to the closing of crossings.”

He noted, “So far, the Strip's agricultural export losses amounted to about $40 million a year, since the beginning of the siege in 2006.”

The situation of strawberries, whose exportation is the most important in Gaza, is no better than that of the flowers. Although Israel announced in November 2014 economic relief for the Gaza Strip — including allowing the export of strawberries from Gaza to the West Bank after banning the practice for several years — this period did not last long. Strawberry exports to the West Bank was once again banned in mid-January after the Israelis found Palestinian strawberry cartons smuggled from the West Bank into Israeli markets and sold at a cheaper price than the Israeli product.

“The Israeli decision to allow the export of strawberries did lead to a rise in exports [to Europe], as Gaza was not allowed to export its vegetables to Europe. Vegetables are sold at cheap prices in the domestic market, as self-sufficiency in vegetables reached 98%. Israel has only allowed the export of tomatoes to Jordan,” Saqqa said.

Bakr Abu Halima, a strawberry farmer from Beit Lahia, told Al-Monitor, “Since we are not allowed to export to the West Bank or Europe, the strawberry is now flooding the domestic market.”

Abu Halima explained that the local market does not offer suitable conditions for the sale of strawberries. “The ministry decided to ban the import of agricultural products that have a local alternative. But which is better for the consumer with weak purchasing power, to buy four kilos of Israeli oranges, or just a kilo of local strawberries at the same price? At a time when we cannot force the consumer to export our products, it remains our only hope,” he said.

As a result, the reluctance to purchase and the accumulation of large quantities of agricultural products in the domestic market led to a decline in the prices of strawberries destined for export, and they are being sold at prices so low they do not even cover their production costs.

Meanwhile, the technical director of the Palestinian Agricultural Relief Committees, Majdi Dabbour, told Al-Monitor, “Government support for farmers is lacking, as well as compensation after the war, as a result of the political division that weakens the capacity of the Palestinian farmer. International institutions support local institutions more than the Ministry of Agriculture does. Therefore, we are implementing programs to help farmers after the ministry refers them to us, because it is incapable of providing suitable compensation.”

Dabbour went on, “There is no marketing plan for farmers. The sea is closed, and so are the Israeli borders and the Rafah crossing. Our ability to achieve vegetable self-sufficiency under such circumstances is a great national achievement.”

The Palestinian farmer's life remains dependent on the policies of a government that is still suffering from political division and the Israeli policies that prevent exportation, control crossings and raise transportation costs across its borders.