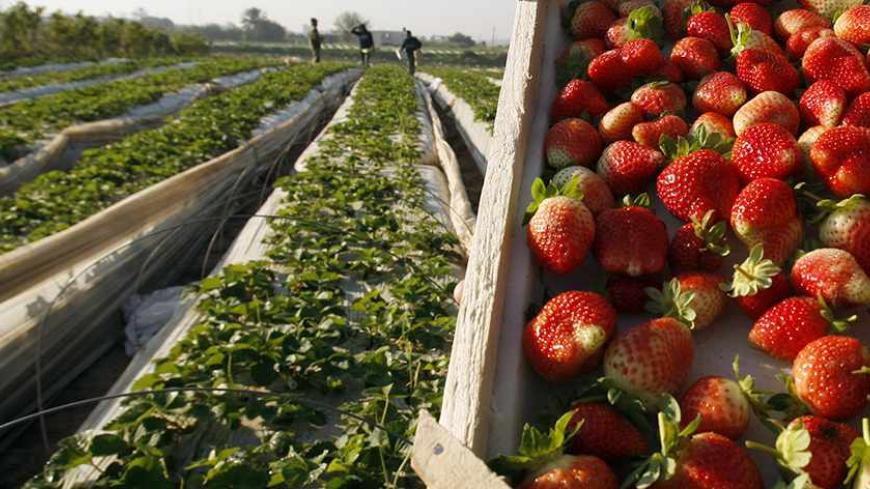 BEIT LAHIA, Gaza Strip — Since the end of the winter storm that struck the region Dec. 12-14, brothers Mahmoud and Ashraf Filfil have devoted their time to repairing what they can of their land, which was planted with strawberries. The land had been flooded with torrential rains, causing extensive damage to the crops. The harvest had just begun at the end of November.

Every April, the brothers prepare the soil, seedlings and greenhouses for September, when the seedlings are planted. During the harvest, the strawberries are picked and marketed locally and globally.

When Hamas seized control of Gaza in 2007, Israel imposed a blockade on the Gaza Strip. However, since 2009, strawberries have been one of the few crops that Israel allowed to be exported from the Gaza Strip to the European market. Yet, Israel prevents marketing Gaza strawberries in the West Bank, as was the case before the siege.

During the storm, the agricultural sector suffered huge losses in plants, animals and infrastructure — especially agricultural roads — because of high winds, rain and hail, which destroyed a lot of crops.

The Ministry of Agriculture estimated Gaza’s agricultural losses during the four-day storm to be about $7.7 million in direct preliminary losses, of which more than $5.5 million were in the vegetables sector, with the rest in livestock.

Mahmoud and Ashraf planted five dunams (1.25 acres) of strawberries this year. In 2006, they planted about 20 dunams (5 acres). The drop was a result of the high cost of cultivation, the lack of export opportunities and the inability of the local market to absorb large quantities of strawberries.

Al-Monitor visited the brothers’ land in Beit Lahia, near the Gaza-Israel border. Mahmoud said, “The cost of cultivating strawberries has increased significantly during the current year because the tunnels were closed, and the farmers are importing from Israel their agricultural needs and the fuel used to power the water pumps for irrigation. [The fuel price] is three times higher than that which was smuggled through the tunnels from Egypt.

"The cultivation of strawberries is a risk. Every year, something happens that damages the crop, especially at export time. Last year, there was the war on Gaza at the start of the season. This year, we got the storm. Our ability as individuals to withstand the loss is limited, so each year, we reduce the area on which we cultivate strawberries.”

Gaza farmers started cultivating strawberries in 1968 on limited areas and began exporting to foreign markets in the late 1970s. The area under cultivation grew over the years until it reached its peak in 2005, when 2,500 dunums (618 acres) were cultivated. The area shrank when restrictions were imposed on exporting the crop after Hamas won in the 2006 parliamentary elections.

This year, about 200 Palestinian farmers are cultivating about 770 dunams (190 acres) of strawberries. Each dunam yields on average about 3 tons of strawberries over two harvests. They are grown from late November until the beginning of February, the first harvest, and there is another harvest in early March.

Ahmad al-Shafei, the head of the Gaza Agricultural Cooperative, said that about 500 tons of strawberries were expected to be exported to the European market, but the crop was affected by the storm and the estimate is now 200 tons for the entire export period, which will last for about three months.

In an interview with Al-Monitor, he complained that official bodies in both Gaza and the West Bank are neglecting strawberry farmers and have not helped overcome the difficulties the farmers face in the cultivation or compensate them for the losses they have suffered as a result of disasters such as wars or storms.

Tahseen al-Saqa, the general director of marketing in the Ministry of Agriculture, told Al-Monitor that agricultural crops exports “fell by more than 90% since the imposition of the Israeli blockade on the Gaza Strip. [The exports] used to be worth nearly $40 million, but now they don’t exceed $4 million.”

Palestinian farmers in the Gaza Strip import their strawberry seedlings from licensed Israeli facilities that grow them. They get their chemicals, fertilizer, pesticides and greenhouses from Israel as well.

According to the Filfil brothers, the cost cultivating 1 dunam of strawberries can reach $4,000, while the crop is sold to Europe for $5,000 — and that’s under normal conditions, without natural disasters or wars.

The total storm damage to the strawberry crop in the Gaza Strip exceeded 20%, according to the strawberry exporters association, but the damage to profits may amount to more than 40% given that the storm came during the export period, when most profits are made.

Shafei said, “Strawberries are our 'ambassador' to the world. They wrote the name of Palestine for the first time in European markets. But today, we are faced with great difficulties that are negatively affecting the 'ambassador of love' from Gaza. … Certainly, we the Palestinians here, deserve the best, but various parties don’t want that for us.”