The Palestinian trend in Israeli cuisine

Modern Palestinian restaurants are flourishing in Israel with dishes inspired by the medieval Muslim empire, reflecting a growing interest in Islamic and Arabic culture. 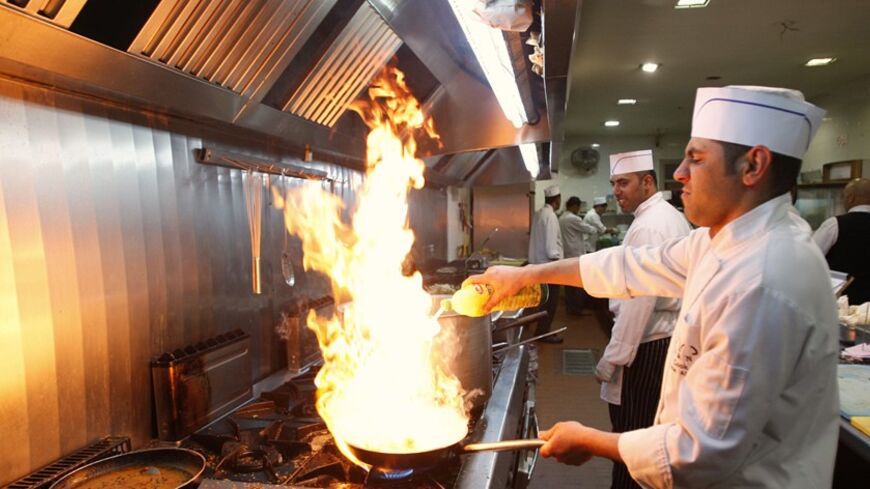 A cook prepares a dish in the kitchen of a restaurant in the West Bank city of Ramallah, April 5, 2011. - REUTERS/Mohamad Torokman

Five and a half years ago, as a young doctoral student researching nutrition in the medieval Arab Muslim empire, Uri Mayer-Chissick decided to prepare a meal that would recreate the dishes served in the 13th century. Working out of his home kitchen, he put together seven colorful dishes, rich in bright spices and based on recipes he found in an ancient cookbook from Baghdad. Some examples include sprouted chickpeas roasted in lamb fat with lemon, spearmint and pistachios and stewed meat patties thrice dipped in egg yolk and served in a beef-and-orange broth. There was even a beverage made out of honey, spices and flour called “honey beer.”

In time, that unusual meal, nicknamed “Dining at the Caliph’s Table,” evolved into an eponymous lecture that included tastings. On April 22, the eve of the traditional Mimouna festival, Mayer-Chissick, who now holds a doctorate in the history of medicine and nutrition and is an expert in foraging for edible plants, delivered his lecture at the Museum for Islamic Art in Jerusalem.

“I’m excited,” he told me before he began telling his large audience about the rich menu of the Arab empire. “Most of the time, there isn’t much demand for this lecture. People ask me to talk about local food, about foraging for wild plants, but not about Islamic food. Even Israeli Arabs aren’t interested in their heritage. They want to be like us. Did you know that the consumption of Coca-Cola is higher in the Arab sector than it is in the Jewish sector?”

Arab cuisine has actually been enjoying a resurgence recently, and not only because Dr. Nof Atamna-Ismaeel from the town of Baqa al-Gharbiya won Israel’s most popular reality cooking show, "Master Chef." Her dream, by the way, includes the creation of a joint Jewish-Arab cooking school.

Over the years, Arab restaurants were classified together as simply “Middle Eastern.” Nevertheless, Israelis have long recognized that Arab cuisine is more diverse and much richer than just grilled skewers of meat. They are even prepared to accept the existence of a Palestinian cuisine — quite a big deal in a country where some people deny the very existence of a Palestinian nation.

Chef Meir Adoni, who serves as a judge on the successful reality show "Chef’s Games" and who owns the restaurants Catit and Mizlala, took a rather bold step when he decided to include “Palestinian Tartar” on his restaurants’ menus. The dish consists of ground beef filet combined with pickled lemons, spearmint, parsley and tahini, set on a fluffy bed of eggplant cream. A restaurant critic who tasted the dish called it “delectable.”

In an interview with TimeOut magazine, veteran Israeli Arab chef Husam Abbas claimed, “Palestinian food is a political combination. That doesn’t sound good to some people, even though my food is Palestinian. People eat Arab food, but they don’t call it Palestinian food. Restaurant owners are reluctant to use that term. … The Jewish Israeli public is not yet willing to accept it.''

The ancient food at the heart of Mayer-Chissick’s lecture is somewhat reminiscent of what Chef Abbas now serves at his restaurant El Babor. For example, there is wild spinach, which Abbas uses to stuff tiny, fried samosas; hubeza, patties made out of wild herbs that are rich in flavors; or watercress, which is used to make a salad. In other words, what is today considered “Palestinian food” is similar in principle to the foods that were cooked in this region during the Arab Islamic Empire.

In his lecture, Mayer-Chissick also talks about a special dish called "sichbaj," which consisted of meat stewed in vinegar. In ancient times, vinegar was much more concentrated than the kind we use today, since it was prepared at home out of old wine. To ensure that his dish is as close to the original from the Middle Ages as possible, Mayer-Chissick receives a regular shipment of spoiled wine from a local wine manufacturer and turns it into vinegar himself.

The tastings come toward the end of the lecture. Mayer-Chissick begins by serving "frikeh" (cooked green wheat buds), which has become popular over the past few years. His dish is more granular than any "frikeh" I know, and his wheat buds are tougher and chewier. The recipe itself is very simple: Put water, salt, hyssop and wheat buds in a pot and bring to a boil. Then lower the flame and continue cooking for a few minutes until there is no more water left. Let it stand for 10 minutes and then transfer to a serving bowl. Season with sumac, olive oil and chopped parsley. Fresh lemon juice can also be squeezed over it.

The next dish is a chickpea stew cooked in lamb fat and a salad of foraged greens. The taste of the latter is much bolder and sharper than the anemic herbs we find in our supermarkets.

The tasting section of the lecture ends with a dessert of “Maimonides’ tea,” made of various unusual wild plants steeped in boiling water. The ingredients include coriander, valerian, cinnamon, caraway seeds, black pepper, nutmeg and more. The “tea” is more like a surprising and invigorating spice juice than any tea with which we are familiar.

“I’m of oriental origin,” said Miriam, who attended the lecture. “These ancient customs interest me because they are very similar to my own family’s customs. I suppose there are a lot of similarities between us and the Muslims. Oriental is oriental. But,” she added, “I know who I am, and I know who they are. The difference is very obvious to me.”

Ido, a young man who also attended the lecture, took it a step further, saying, “The original meaning of the term ‘Palestinian’ was geographical more than anything else. We are Palestinians because we live our lives within the Palestinian space. It is therefore important for us to learn the history of the Palestinian region.”

The participants were especially excited by the tastings. The food was familiar, but the flavors were different. Maybe it is because Mayer-Chissick makes a point of foraging for the raw ingredients himself or purchasing them in the Arab town of Umm al-Fahm. Many of the products sold there somehow reach the town from Iraq, even though that country has no commercial ties with Israel.

“Maybe this food is a bridge that will turn into something much bigger over time,” said one of the participants.