The repercussions of the power crisis hitting the Gaza Strip, receiving less than four hours of daily supply, are now reflected in the agricultural sector and threatening food security in Gaza. 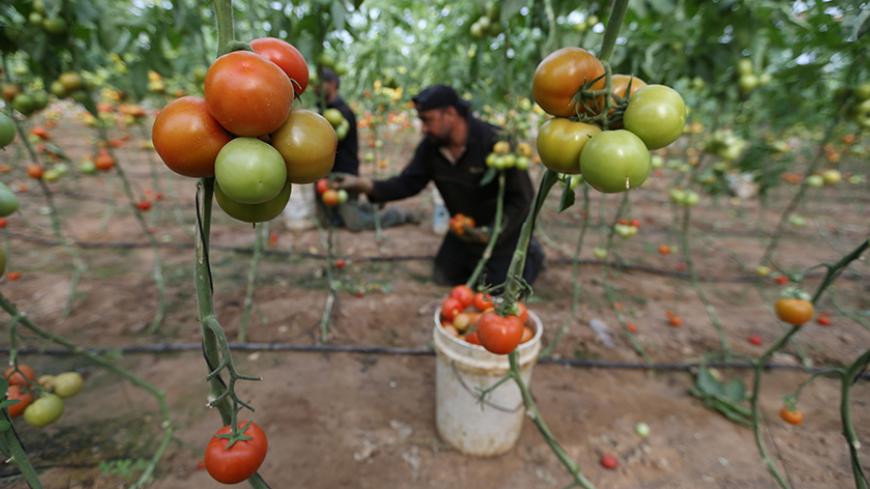 Palestinian farmers pick tomatoes to be exported into Israel on a farm in Deir el-Balah in the central Gaza Strip, March 11, 2015.

GAZA CITY, Gaza Strip — The electricity crisis in the Gaza Strip intensified after Israel approved June 13 the Palestinian Authority’s request to gradually reduce the power supply to the enclave.

As of June 19, the daily power supply dropped to less than four hours a day of electricity. The power crisis has taken its toll on all aspects of economic life in the Gaza Strip, including the agricultural sector, as farmers rely on electricity-powered wells for the irrigation of their crops.

On June 21, Egypt supplied the Gaza Strip's sole power plant with 1 million liters (264,000 gallons) of cheap diesel fuel, but power supply hours have yet to increase.

Extended power outages are now threatening plant life and food security in the Gaza Strip, and some farmers are buying generators to keep their crops alive. They bear the high cost of fuel and are forced to increase the price of their products.

Amjad al-Shawa, the director of the Palestinian Non-Governmental Organizations Network (PNGO), told Al-Monitor, “This crisis also threatens to increase the ranks of unemployed farmers and agricultural workers who will soon be unable to meet the increasing costs of their agricultural activity. According to the Ministry of Agriculture, the total losses and damages caused by the electricity crisis are estimated at nearly $55 million.”

Omar Talib, a farmer who is seeing his source of livelihood threatened by the power crisis, told Al-Monitor, “I have been working in agriculture for more than 20 years. This is how I make ends meet. The power crisis has become a nightmare for farmers. We cannot operate our irrigation systems without electricity.”

He said, “I had to uproot some plants to save water for other plants, since I could not afford to run the generator given the high price of fuel.” He added that the irregular power supply led to the destruction of some of his plants since he was forced to irrigate them whenever power was available, even late at night, which affected the quality of some vegetable crops such as bell peppers and destroyed others.

Mohammed Mustafa is facing a more difficult problem than Talib. His agricultural lands are in Hajar al-Deek border area while he lives in the center of Gaza City. He can only water his crops if the four power supply hours are during the day, since at night the border area becomes dangerous and deserted and he cannot risk his life to save his plants.

“The crisis forced me to reduce my crops.” he told Al-Monitor. “Summer is coming and summer crops cannot stand long-term water cuts. Sadly, the electricity crisis is intensifying, which threatens our livelihood."

Mustafa said that the continued crisis may lead to a subsequent reduction in the number of crops provided by the Gaza Strip and called for government support. He also expressed fear that the ministry would resort to imported crops to compensate for the shortage, which would be detrimental to Gaza farmers.

The Ministry of Agriculture's Policy and Planning Director Nabil Abu Shamala told Al-Monitor that lands cultivated with vegetables cover a surface area of about 20,000 acres, of which about 40% is located in the eastern part of the governorates of Rafah, Khan Yunis and al-Wusta. "The power outage has disrupted the irrigation process by affecting the water quantities allocated to irrigation, which dropped by 50-60%. These quantities are expected to further decrease by up to 80% with Israel reducing its supply to the enclave," he said.

He added that the eastern towns such as al-Fakhari and Abasan in Khan Yunis governorate are the most affected areas, where the estimated damage rate stands at 60%, or about 12 tons of destroyed crops per acre, while in Gaza City and the northern areas this rate is estimated at 40%, or about 8 tons per acre.

Shamala noted that the cost of using generators to operate agricultural irrigation wells in the governorates of Rafah and Khan Yunis is $30 per hour, which exceeds farmers’ financial capacity.

“The ongoing crisis will lead to the dehydration of agricultural crops, the spread of plant diseases and insects, the increase of the percentage of deformed fruits due to irregular irrigation, not to mention low yields,” he said, pointing out that the average price of 1 kilogram (2.2 pounds) of vegetables in the Gaza Strip is about $0.28.

He added that the power crisis will affect the economy of the Gaza Strip and will lead to instability in food security and a decrease in purchasing power, as well as to the shrinking of exports and the increased inclination toward more imports to fill the shortage, which will affect domestic production and the entire economic situation.

Shawa explained how the power crisis has severely affected farmers, saying, “The power crisis in Gaza is chronic, exacerbating and has entailed serious repercussions, especially on the agricultural sector, since the irrigation system relies on water raised from wells using power-operated pumps."

He added, “Recently, the power supply has dropped to less than four hours a day, so hours of irrigation also shrunk while temperatures increased. Farmers have been badly hit by this crisis.”

Shawa pointed out that the farmers’ only available option is the use of generators but that this will increase the production cost, which would lead consumers to cut their purchases and farmers to uproot a large number of crops that need water in order to save other crops that are more economically feasible. “Desertification will happen if the crisis perpetuates,” he said.

He concluded that the Gaza Strip has always been reeling under a suffocating water crisis and that the PNGO seeks donor countries to provide farmers with generators to pump water, build small solar plants and lay down strategical water lines.