A young Palestinian graduate of the Faculty of Agriculture at Al-Azhar University in the Gaza Strip has built a hydroponic farm to grow lettuce without the need for soil, in a bid to overcome soil-related problems and high salinity levels in the water in Gaza. 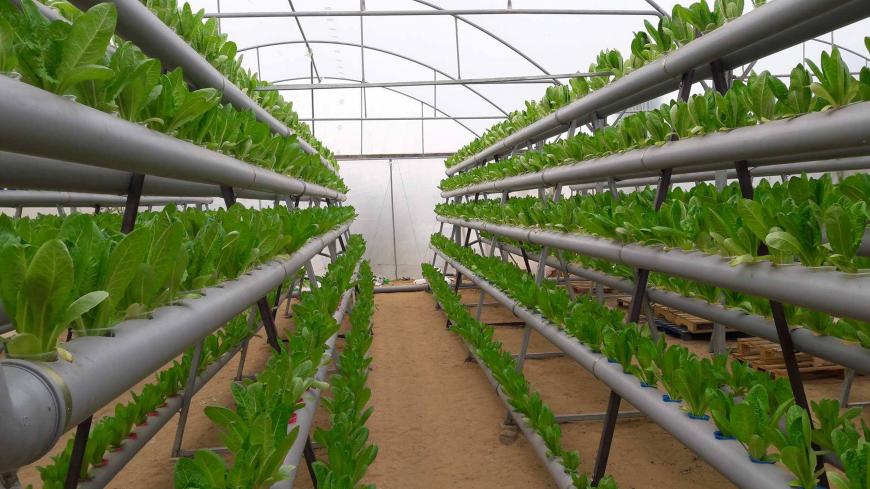 KHAN YUNIS, Gaza Strip — Two years after graduating from the Faculty of Agriculture at Al-Azhar University in Gaza, Feras Bakri, 25, has built a small hydroponic unit to grow lettuce without using agricultural soil. By replacing traditional soil farming with hydroponic farming, he hopes to overcome the problems of soil contamination and the high salinity of irrigation water in the Gaza Strip.

Bakri’s hydroponic system is in a 1,600-square-foot greenhouse. There are 40-foot-long rafts lined up one over the other for optimal use of space. Before the start of cultivation, the greenhouse was sterilized with chlorine and a fungicide. The use of insecticides is not required in this type of agriculture.

Bakri told Al-Monitor, “A pipe passes through the rafts, stemming from the discharge reservoir. A pump supplies the rafts with the hydroponic nutrient solution. The solution contains the micronutrients and macronutrients needed for the growth of the seedlings. The excess solution is collected, its pH level is adjusted and it is put back in the reservoir for recirculation.”

Boasting about the advantages of the hydroponic system and how it solves farmers’ problems in Gaza, Bakri said, “Hydroponic farming does not consume large amounts of water. The lettuce I planted consumes only [a fraction] of the water quantity it would have needed if grown in soil.”

He noted that about 5,000-7,000 seedlings can be grown per dunam (one-quarter of an acre), while an area one-seventh the size — the 1,600-square-foot hydroponic farm — can handle about 3,000 seeds. “Given that the plants’ roots literally dangle straight into the water and that greenhouses are sterilized, the hydroponic systems prevent the outbreak of soil-borne diseases, such as nematodes, Fuzarium, Pythium, Phytophthora, Verticillium, insect larvae and others that are widespread in the Gaza Strip.”

It was not easy for Bakri to convince his father to try this new agricultural technique and to give him a 2,400-square-foot lot in the family’s 6-dunam (1.5-acre) farmland. He said, “The lot included some olive, palm and almond trees that were contaminated by soil-borne diseases and thus were economically useless. After convincing my father of the importance of my experiment, I uprooted these trees and started installing my greenhouse.”

Bakri further pointed out that well water has a high salinity level and a high total dissolved solids (TDS) level above 2,600 parts per million (ppm), which affects the production quality. “This alternative farming method reduces water consumption and the reliance on well water. Hydroponic farming produces a healthy crop that contains all nutrients,” he said.

“For my hydroponic farm, I buy water with a TDS level of about 800 ppm. I get from my experiment a larger number of lettuces with bigger sizes and greener leafs,” he said.

Bakri submitted his idea of building a hydroponic farm to Islamic Relief Palestine (IRPAL), a humanitarian and development organization. IRPAL had launched a program called Livelihoods Creation and Economic Empowerment for Vulnerable Groups. With the help of a colleague, Taher al-Agha, Bakri was able to secure $5,000 from IRPAL to fund his hydroponic farm.

In an interview with Al-Monitor, Ahmed Ghanem, who is the head of the Livelihoods Creation and Economic Empowerment for Vulnerable Groups project at IRPAL, said, “The project has provided funding to 350 pilot ideas to create sustainable employment opportunities for different categories in the Gaza Strip, focusing on graduates with high unemployment rates.”

Ghanem pointed out that the project supported the idea of hydroponic farms given the urgent need for such pioneering ideas in the agricultural sector. “The soil problems in the Gaza Strip are recurrent due to uninterrupted agriculture activity all year long amid the lack of areas allocated for agriculture. Agricultural lands need to be kept fallow and uncultivated for three months each year to allow for ventilation and sterilization,” Ghanem added. “IRPAL is inclined to support industrial soil production.”

Nizar al-Wahidi, the director general of guidance and environment at the Ministry of Agriculture, told Al-Monitor, “Multiple factors pushed the ministry to promote hydroponic agriculture. A hydroponic farm for the cultivation of lettuce was built in the ministry. This experience showed that this type of agriculture preserves the quality of the crops and can overcome soil- and water-related problems in the Gaza Strip.”

Wahidi explained that fungal diseases are increasing due to erroneous agricultural practices, such as the excessive use of agricultural pesticides by farmers, in addition to the soil deterioration caused by the various wars.

Explaining why farmers overuse pesticides, he said, “Importing vegetables and fruits is costly to local consumers, thus the need for a local alternative. Farmers are using pesticides and fertilizers to maintain and multiply production so as to satisfy local needs. This is in light of the small areas allocated for agriculture and the increasing population growth in the Gaza Strip.”

Wahidi added that the construction cost of hydroponic farms is relatively high compared to the cost of traditional agriculture for the farmer, but that these farms have higher economic feasibility.

Prolonged and chronic power cuts are preventing farmers from operating hydroponic systems because the pumps are power-operated.

Bakri aspires to expand his project to grow more leafy vegetables on a larger scale and to spread this idea among farmers to help increase the economic returns of agricultural areas and produce crops without pesticides harmful to human health.

Agriculture and farming
Start-ups and entrepreneurship