Amid severe water shortages and concerns over pesticide use, some Egyptians are hoping to transform the country's agriculture sector by relying on hydroponics to grow healthy and pesticide-free crops. 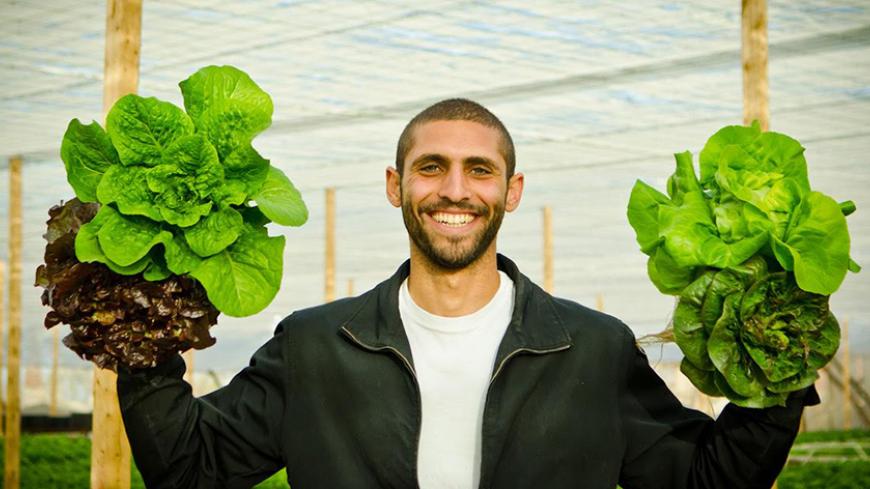 As Egypt's agriculture is threatened by water scarcity, soil nutrient depletion and fast-shrinking agricultural lands, Amr Bassiouny decided to think outside the box in the hope of finding a way out of this predicament and boosting the agricultural industry in general. After a period of intensive self-study of farming systems, Bassiouny, with the help of his partner Adel El Shentenawy, founded one of Egypt's first hydroponic farms — Egyptian Hydrofarms.

Egyptian Hydrofarms became a boon for those who look for affordable healthy and pesticide-free leafy greens. Al-Monitor spoke to Bassiouny to get more details about his farm and the greens he grows hydroponically.

Hydroponics is a farming method that depends entirely on water instead of soil to grow plants. Plants can get the required mineral nutrients directly from the pH-balanced water. Such farming systems are environmentally friendly, do not use chemical pesticides and above all save approximately 95% of the water wasted in traditional farming.

Bassiouny, who studied business at Hong Kong University, told Al-Monitor, "I spent around nine months studying agriculture techniques on my own. Then I built a home hydroponics system and conducted several experiments. After successful trials, I insisted on spreading the idea and having my own farm."

Being fully convinced of this idea, Bassiouny dedicated all his time to establish and develop his farm, leaving his job in the business sector. In cooperation with co-founder Shentenawy, Bassiouny started a hydroponic farm producing leafy greens in January 2013. The farm is located along the Cairo-Alex Desert Road and opens its doors to all consumers and students who visit it.

In Egyptian Hydrofarms, seeds are placed in pots to freely grow. The nutrient-rich water is pumped through pipes. "We adopt the nutrient film technique. It is a hydroponic system by which the necessary dissolved nutrients are delivered to the plants' bare roots through gullies or channels. Under this system, we became able to grow a wide range of leafy greens in the same greenhouse,” Bassiouny said.

Lettuce and herbs in general are cool-weather crops, so they flourish in winter and spring. In the summer, these leafy crops grow hydroponically in Egyptian Hydrofarms’ greenhouses.

Before founding Egyptian Hydrofarms, Bassiouny started up a project called Desert School, which seeks to promote tourism in the Sinai Peninsula. Later he decided to establish the hydroponic farm to give the country's agriculture an extra boost. "The future is for hydroponics. At first, I thought of establishing the farm in Sinai, but I changed my mind. The hydroponic system can be applied at any place. Hence, I look for lands that are not suitable for farming to make the best use of them," he said.

Traditional farming relies on water and soil. In Egypt, water sources are either polluted due to the drainage water being pumped into the Nile or highly salted. The soil also gives rise to insects and, therefore, farmers resort to chemical pesticides to get rid of them. This negatively affects food safety. All these factors along with the threats of global warming put traditional farming at stake, Bassiouny said.

"Under these deplorable conditions, people won’t find anything to eat by 2050 and the Nile water won't be enough for irrigation. For this very reason, I was implored to introduce hydroponic techniques, which save more water and its products are of higher quality and larger quantity," he said.

Funding was a key obstacle faced by the farm founders. "Definitely, it is very risky. I left my job and I invested all my money in this project. This is the same condition of my partner. Now, a third partner, who got interested in our project, has recently joined our team," Bassiouny said.

Egyptian Hydrofarms produces around 12 kinds of lettuce, including romaine, baby Tuscan kale and Batavia, besides other leafy greens. These crops are ideal for healthy salads. "We can grow any leafy crop. Surely, many non-leafy greens can grow hydroponically. But in our farm, we focus on the leafy crops. Regarding lettuce production, we can produce 1,000 heads of hydroponic lettuce within 60 days. We are planning to increase our produce in the upcoming period," Bassiouny said.

The farms' produce can be found in many stores in Egypt, gaining more popularity among consumers. "I think the local market is saturated and our products successfully managed to cover the domestic demand," he said.

The farm’s staff totals nearly 20 people, including college graduates and undergraduates. The majority of them are graduates. "Having previous experience in farming is not among our criteria for selecting our staff members. The ability to learn is more important. Our staff is divided into three teams. One team is in charge of transferring the seedlings to the hydroponics setup. Another team is responsible for harvest. As for the third team, it focuses on maintenance work," Bassiouny said, adding these teams work along with the sales manager.

The workers, he continued, stay at the farm throughout the week and they are provided with appropriate housing. In the morning, the crop is harvested and packed. "We do not store any of our products. They are sold and transferred to stores fresh from the farm," Bassiouny said.

As Bassiouny’s dreams have no limits, he dreams of expanding the concept of hydroponics not only in Egypt but throughout the Middle East. "We do not aspire to merely become exporters of leafy greens. We want to export hydroponic farming. I want to make Egypt the pivotal hub of this system in the region and we can do that," Bassiouny added.