Tulima Farms in the Nile Delta relies on climate-friendly mechanisms to promote agriculture that adapts to climate change and relies on less water consumption amid a looming water crisis in Egypt. 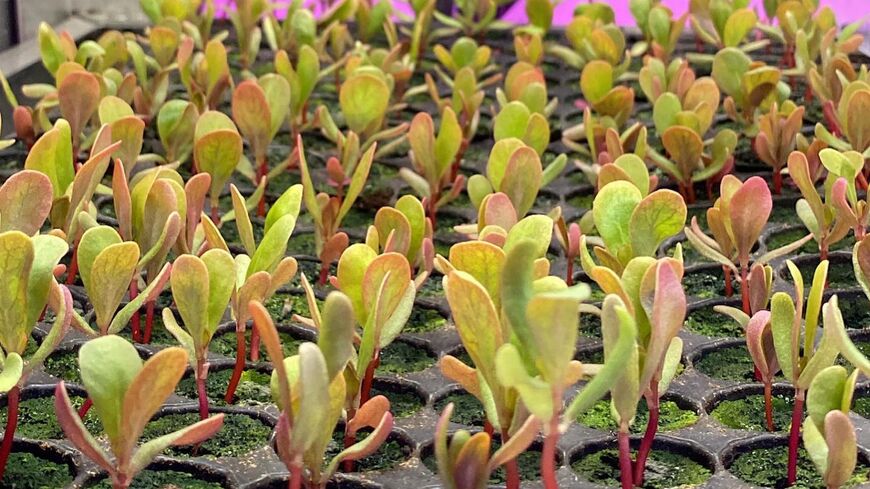 Tulima Farms spreads over an area of ​​25,000 square meters and adopts climate-friendly methods to boost production while ensuring sustainability.

Seif Salama, operations director of Tulima Farms, told Al-Monitor the idea of the farm started with using automated agricultural tents that are monitored to track the condition and growth of crops by the minute and to adapt to climate change.

“The farm’s main goal is adapting to climate changes but also to recycle everything we can use and benefit from. For example, we use alternative soil made of coconut fibers. Through these ground coconut bristles, plants can grow in a medium free from diseases, molds, bacteria and any damage caused by the soil itself. We also use recycled plastic containers and a closed recycled water circuit that saves 90% of the water. Irrigation of crops thus relies on hydroponics. Moisture levels are also controlled,” Salama explained. “In addition, we grow our products inside bags made of recycled plastic bottles.”

“To address Egypt’s growing water crisis, Tulima Farms relies on hydroponics and vertical farming. As crops grow vertically, quantities also increase while saving water and energy. This is all within the smallest possible area. Technology contributes to making the most of the space while increasing the yield,” Salama said.

“This means smarter space utilization and less water consumption — about 20 liters. The containers operate on solar energy supplied by panels on top of the container, which is different from conventional farming techniques. This project aims to save energy and water within a small area while avoiding the harmful impact of chemical pesticides,” he continued.

“The prices of the crops produced from the farm are close to the prices of conventionally grown crops. Contrary to common belief, crops will not have a higher price because they are pesticide-free. In fact, technology multiplied production by 10 to 15 times,” Salama noted.

The Food and Agriculture Organization (FAO) of the United Nations carried out a case study across different countries in 2021 on climate-smart agriculture. The study found that agricultural resources in Egypt are under threat because of climate change and increasing human pressure.

According to the study, the cultivated area around the Nile will shrink as sea levels rise. It is expected that temperatures will rise, and the gap between available water resources and actual needs will widen.

Samia el-Marsafawy, head of the agrometeorology and climate change research unit at the Soil, Water and Environment Research Institute of the Agricultural Research Center in Egypt, told Al-Monitor that the long-term predictions using simulation models and different climate change scenarios show that global warming will negatively affect the production of many Egyptian agricultural crops, which will cause severe shortages in the production of the main food crops in Egypt.

According to a 2018 report by the UN Framework Convention on Climate Change, Egypt’s agricultural sector comes second in terms of the highest greenhouse gas emissions at the national level, standing at 14.9%.

Agriculture is the main source of income and employment in Egypt due to its wider geographic area. More than 55% of Egypt’s population live in rural areas, where they mainly rely on agricultural activities as well as animal, poultry and fish production activities, according to a July report by the Egyptian Ministry of Planning and Economic Development.