The project of an Egyptian student consisting of using the Sinai environment for sustainable agriculture with the use of less water may be a solution to Egypt’s water scarcity problem. 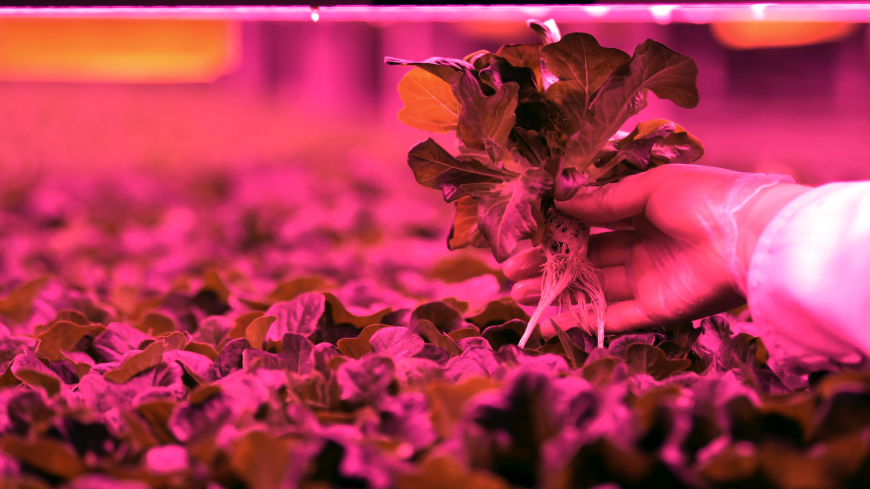 A picture shows the UAE's al-Badia Farms in Dubai, an indoor vertical farm using innovative hydroponic technology to grow fruits and vegetables all year round, on August 4, 2020. - Badia Farms is the Middle East's Based in downtown Dubai, the farms ground-breaking methods sustainably grow crops without sunlight, soil or pesticides. The farm uses 90% less water compared to open field farming. The companys vision is to revolutionise the agricultural industry in Middle East to provide a solution for the regions food security. - KARIM SAHIB/AFP via Getty Images

The project — designed to be built as a cultural center in Wadi el-Weshwash in the town of Nuweiba in south Sinai — uses the surrounding environment, including the mountains, to build an integrated center providing organic nutritional products and natural herbs used in manufacturing medicines and fragrance products. A tourist and entertainment complex offering various educational and entertainment activities is also on the horizon, said Ayman.

Ayman, a student at the Faculty of Applied Arts at Zagazig University, told Al-Monitor via phone she chose the project based on the spiritual meaning of mountains.

She noted, “I was nominated by my professors to participate in the architecture competition. The World Architecture Festival has been in place since 2006, and it has a section dedicated to interior design.”

Ayman said the project consists of a hydroponic farm, which is a system to grow crops without soil. The roots of the plants grow in a liquid nutrient solution that is recycled and reused repeatedly through plants. The hydroponic farm produces medicinal plants, used in the manufacture of medicine, and crops that bear fruit to be served with meals in the farm’s restaurant.

She chose Wadi el-Weshwash because it is located next to a region of rich valleys whose water and minerals can be utilized in organic agriculture.

The design of the complex features a library, a restaurant and an art studio, Ayman said, noting that the design reached the final stage of the competition and was chosen among five others.

Atef Suweilem, a professor of agricultural engineering at Zagazig University, said the hydroponic agricultural method consists of either growing the seeds of plants or herbs in a nutritive water solution containing the main 12 to 16 nutrients plants need — or growing the plants in an inert solid material so they do not interact with the nutritive solution. Using this method does not require the use of chemical fertilizers, the surplus of which usually seeps into the soil in traditional agriculture, according to Suweilem.

Hydroponic agriculture also protects the plants from pests that live in the soil, as is the case in traditional agriculture, he said, adding that ancient Egyptians were the first to know hydroponics, and perhaps the papyrus plant is the most prominent example of this type of agriculture.

Suweilem said hydroponics is an ideal way to deal with water scarcity and climate change, stressing the need for Arab countries that suffer from a shortage of agricultural lands due to their desert nature, including Egypt, to rely on this type of agriculture.

Yasser Ahmed, an expert in agriculture and a former professor at the Egyptian Agricultural Research Center, stressed the need for Egypt to turn to hydroponics in the near future, as it helps save water and energy and increases productivity. Ahmed said hydroponic agriculture uses 95% less water compared to traditional agriculture. Leaf crops consume about 30% less water than traditional agriculture, and if the cultivation of these crops is expanded on the hydroponic farm, that method can be used widely, he said.

“This is the future of agriculture. We do not want to depend on imports. We hope we will have local production throughout the year, regardless of climate change, weather, rain or drought,” Ahmed said.

Of all sectors in Egypt, the agricultural sector consumes the largest share of water — meaning it consumes roughly more than 85% of the country’s share of irrigation water. Although Egypt has lost some of its fertile lands due to urban sprawl, there is an attempt to balance this through the expansion of agricultural areas in the desert. The total cultivated land was estimated at 9.3 million acres — 3.2 million acres of which are in lands recently reclaimed by the state and 6.9 million acres in other lands, according to the latest 2019 statistics of the Central Agency for Public Mobilization and Statistics.

Agriculture is essential to the Egyptian economy, as its added value represents about 14.5% of the gross domestic product. In 2016, agricultural income reached 256.9 billion Egyptian pounds ($16.3 billion). The sector also employs 29.6% of the working population and represents 11% of all exports. Because of the water shortage, the government issued measures in January 2018 to limit the cultivation of water-intensive crops such as rice.