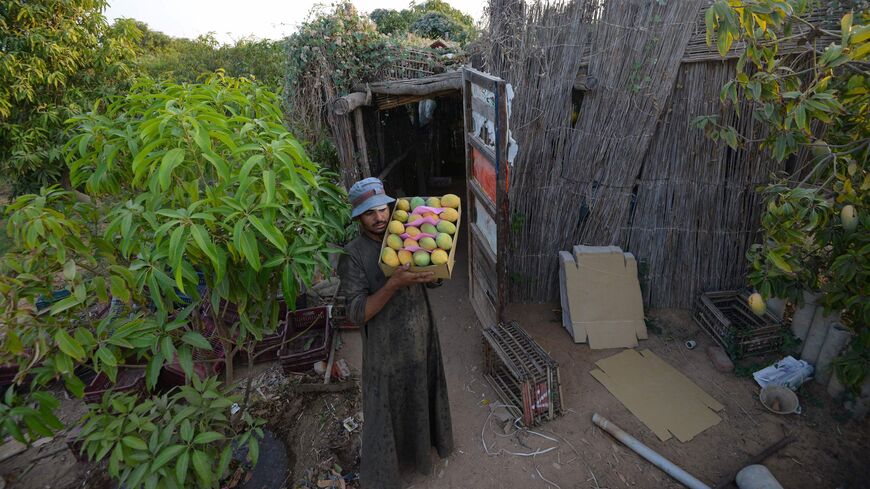 An Egyptian farmer carries a box of mangoes at a field in Wadi Al-Natrun area in Al-Beheira governorate, on Aug. 26, 2017. - MOHAMED EL-SHAHED/AFP via Getty Images

CAIRO — Farmer Khaled Hussein waited eagerly for the mango harvest to start so he could pluck them from his dozens of mango trees on his five-acre farm. The mango harvest season starts in the city in June and comes to an end in September or October. Come the harvest season, however, there were no mangoes on the trees.

Like other farmers in Egypt's mango cultivation hub of Ismailia, 127 kilometers (79 miles) northeast of Egyptian capital Cairo and near the Suez Canal, Hussein had only to collect the mangos and hand them over to traders, who had paid for them in advance.

"I have lost most of the output this year," Hussein told Al-Monitor with a heavy voice. "It's the first time in decades."

Climate change is showing an ugly face to Egypt's thousands of mango farmers, Hussein included. Ismailia's mango farmers have lost over 80% of this year's output to the rising temperatures, causing a socioeconomic catastrophe. Much of the city's population of around 15 million people are involved in the mango business in one way or another.

"Mango cultivation is the backbone of the economy of this city," Sami Selim, a member of the Egyptian parliament from Ismailia, told Al-Monitor. "There is someone involved in the mango business in almost every home in the city."

Mangoes grown in the city are known for their quality, and used to sell in markets nationwide as well as in foreign markets, bringing in decent profits for mango farmers like Hussein. However, rising temperatures seem to be putting an end to mango production in Ismailia.

"The temperature was extraordinarily high in March this year, destroying most of the mango fruits before they ripened on the trees," Ayman Hamouda, the head of the Horticulture Research Institute, an affiliate of the Ministry of Agriculture, told Al-Monitor.

Hussein was banking on his farm yielding 10 tons of the finest mangoes. Instead, he harvested 400 kilograms, a catastrophe by all measures for a farmer like him, totally dependent on the money his harvest brings each year to keep his family going.

"This amounts to less than 5% of what I expected to collect from the farm," Hussein said. "I do not know how I will repay this money, especially with the prospect of heat getting worse in the coming years."

The rising heat endangers more than Egypt's mangoes. It also threatens other crops in this country, including bananas and tomatoes and palm trees, according to the Horticulture Research Institute.

On June 16, the Egyptian minister of irrigation and water resources, Mohamed Abdel Aty, said climate change is among the toughest challenges facing his country. Global warming, he said, would have negative effects on Egypt's plans to achieve food security.

Some studies predict that land use in Egypt will change due to flooding from sea level rise, seawater intrusion and secondary salinity, which is the result of human interference. Water resources will also be affected because of global warming and decreases in precipitation. Agricultural production is expected to decrease by 8 to 47% by 2060 and agriculture-related employment to drop by up to 39%.

Egypt's coastal cities have already felt pinches from climate change, with rising sea levels and unprecedented torrential rains. Rising sea levels induced by global warming are expected to force millions of Egyptians to migrate from coastal areas to other parts of Egypt.

Parts of the Nile River Delta, home to around 50% of Egypt's population and the epicenter of the nation's agricultural production, are expected to be lost to an expected rise in the sea level. Egypt can expect to lose between 12 and 15% of land in the Delta to global warning.

Agriculture officials in Cairo say other factors are also contributing to the destruction. They blame bacterial canker, a disease caused by two closely related bacteria that infect mango stems and leaves, for partly causing the crop devastation. They also point to mango farmers' use of ineffective counterfeit pesticides. Nonetheless, these factors are rather small details in the larger picture of the toll climate change is having on Egyptian agriculture.

Ismailia's representatives are calling on the federal authorities to compensate farmers for their losses in the disastrous mango harvest.

"Some of the farmers have lost more than 80% of their expected produce," Selim said. "They need to be compensated or they could go to jail because of their accumulation of debt."

He and other lawmakers representing Ismailia recently raised the issue in parliament.

So far, farmers like Hussein have received no support from the government whatsoever. He is deeply in debt and does not know what the future holds for him. He has to find a new way to earn a living with other crops that can adapt to the rising temperatures.

"I have been in the mango growing business since I was a child," Hussein said. "This is the deepest loss I have ever experienced in my life."