Israeli airstrikes on Gaza in May destroyed a hydroponic farm established by a young man who had hoped to help the besieged enclave overcome the many crises in its agricultural sector. 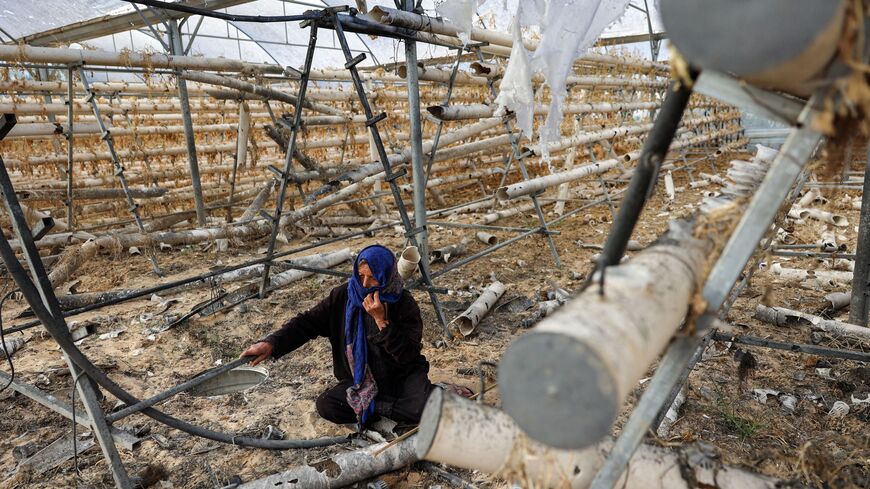 A Palestinian woman inspects damage at her hydroponics greenhouse, which was destroyed by Israeli airstrikes during the May 2021 conflict between Hamas and Israel, in Beit Lahia in the northern Gaza Strip, on June 17, 2021. - MOHAMMED ABED/AFP via Getty Images

GAZA CITY, Gaza Strip — About a year and a half ago, Abdallah Abu Halimeh established a hydroponic farm near the town of Beit Lahia, in the northern Gaza Strip.

The farm stretches over an area of 2,000 square meters (21,500 square feet, or half an acre) and includes 41 production units. Abu Halimeh, 34, who holds a degree in geographical information systems, said that before it was destroyed, the operation was a “tourist attraction” because people wanted to see his innovative operation.

But the damaged irrigation system, containers, pumps and lights at the farm have yet to be repaired more than two months after the Israeli attacks on the Gaza Strip.

Abu Halimeh, who estimated losses at $120,000 (about half the investment came from the UN's Food and Agriculture Organization), said he believes the attack on his project on the last full day of the Israeli-Hamas war was “deliberate.” He told Al-Monitor, “The shells that hit every greenhouse, the control system, the solar energy system and the cooling room at the farm indicate that the occupation deliberately targeted the farm.”

At a time when agriculture is the most important economic activity in the Gaza Strip, the Palestinian Ministry of Agriculture in Gaza estimated the losses to the agricultural sector from the recent hostilities at $204 million, including damage to agricultural facilities, feed mills, wells, main and subsidiary transportation lines, farm ponds, power plants, fish farms, fodder, agricultural equipment, pesticide warehouses and bee farms.

Abu Halimeh has worked in agriculture since he was 12. He grew up in a family mainly working in this sector and has been hearing about farmers’ problems since he was a little boy. He said he “opened the farm in a bid to overcome the problems facing farmers in Gaza. The land was exhausted from farming. At the same time I wanted to have a job and I now work at the farm with eight other people.”

He said the off-season production of crops and the higher yield per unit area makes the farm unique. Abu Halimeh said his farm produces five times greater yields more than conventional farms and relies on the rational use of water and fertilizers.

The variety of crops — including beans, lettuce, scallions, broccoli, spinach, strawberries and chard —  grown per unit area is greater than would be find in a normal greenhouse. This is because hydroponics is based on vertical instead of horizontal farming, which allows a better exploitation of a property's square footage.

But after the farm was targeted, despair took hold of Abu Halimeh, who is now thinking of leaving the country. He complained that the Ministry of Agriculture limited its role to damage control and did not compensate farmers the same the owners of damaged urban facilities were.

Wael Thabet, director of the planning and policy division in the Ministry of Agriculture, told Al-Monitor that the first step to restore the agricultural sector is to exercise damage control. Thabet said this is based on three principles — recovery, resilience and development. “We are marketing projects to donors to support the recovery of affected farmers and help them carry on with their production, then to promote their resilience through the rehabilitation of agricultural facilities and lands, such as greenhouses and solar energy.”

Al-Monitor shared with Thabet Abu Halimeh’s complaint about the lack of any compensation to farmers, unlike the owners of demolished urban facilities.

Thabet said that from 2008 to 2021, the agricultural sector in Gaza has suffered heavy losses due to the repeated Israeli attacks, which caused protracted crises. Agricultural damages during those years are estimated at $1.3 billion. He said, “The affected farmers were supported with just 30%, which explains why they constantly complain about not being fully compensated, particularly since the challenges facing the agricultural sector are huge.”

He said Gaza would like to see international institutions implement projects aimed at boosting the farmers’ capabilities and reviving the agricultural sector.

Agricultural expert Yazan Kallab said multiple problems face the agricultural sector in Gaza, most notably the water crisis due to the excessive use of water and limited water resources. Added to that is the higher salinity of irrigation water — as groundwater is the sole source of irrigation water — urban sprawl, Israeli attacks and gradual soil pollution, he added.

Kallab told Al-Monitor that all these problems led to hydroponics as a way to achieve sustainable development and food security, given that it is based on irrigation water rationalization, water recycling and better exploitation of a property's area.

Other advantages of hydroponics include that there is little to no need for pesticides and soil, which means crops do not suffer from diseases caused by soil-borne pathogens, Kallab added.