Israel’s destruction of Gaza’s agricultural sector has resulted in a drop in food supplied to local markets, inflating prices that are out of reach for the impoverished population. 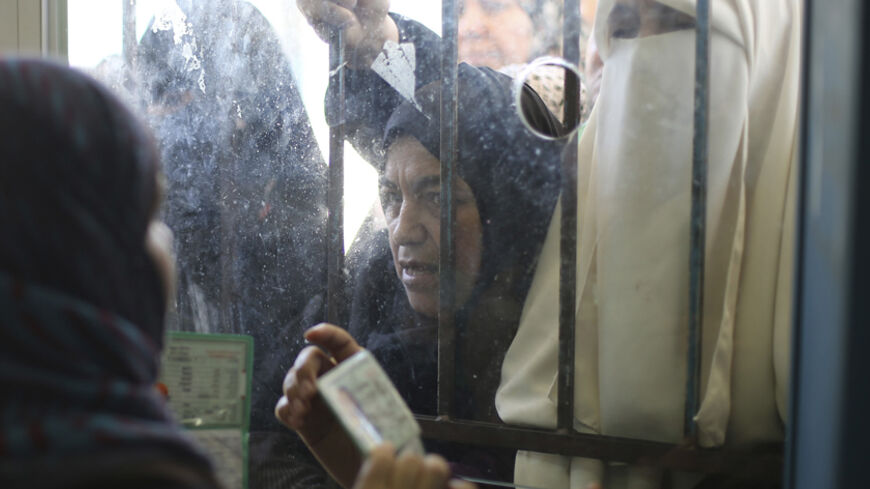 GAZA CITY, Gaza Strip — Souad Motlaq joins a long queue in Gaza City to get aid from one of the charities that provides food to thousands of Gazan families suffering from food insecurity as a result of the recent Israeli war.

Motlaq was covering her head with a piece of cardboard to try escape the hot sun, sighing as she saw the queue was moving at a snail's pace. She told Al-Monitor indignantly, “This is the first time I have stood in a queue to get food aid. War alone forced me to do this.”

Her seven-member family can no longer obtain food due to its scarcity and skyrocketing prices, which have forced her to resort to relief organizations for food.

The Israeli war on Gaza, which lasted 51 days, inflicted extremely significant losses on the production, agricultural and livestock sectors, affecting the food supply to the markets.

The agricultural sector losses reached an estimated $550 million, including $350 million in direct losses, according to the Ministry of Agriculture's Policy and Planning Director Nabil Abu Shamala.

Abu Shamala said during a news conference attended by Al-Monitor on Sept. 6, “Israel directly targeted more than half of the agricultural areas in the sector, which are estimated at 140,000 dunums, while the remaining areas were more or less damaged as a result of the inability of the farmers to reach their crops, which caused the lands to suffer from drought.”

According to economy expert Moeen Rajab, Israel targeted agricultural land out of fear of the presence of underground tunnels or rocket launchers underneath without taking into account the economic effects of such devastating acts.

Rajab told Al-Monitor, “Targeting agricultural production has led to food insecurity in the Gaza Strip and has pushed up the unemployment rate after workers in this sector lost their jobs.”

After the cease-fire deal was reached, farmer Abdul Hamid Audi went to inspect his agricultural land located in the Shajaiya neighborhood east of Gaza City. All he found were ruins.

"The Israeli tanks have completely ruined my 8-acre [0.01-mile] land that was planted with cucumbers and tomatoes and equipped with an irrigation system, water pumps and modern agricultural tents,” Audi told Al-Monitor, saying his losses amounted to $12,000.

The terms of the agreement, which was reached during negotiations in Cairo, provided for the termination of the Israeli buffer zone along the border security fence, but Audi believes that these areas are in dire need of enormous amounts of work to restore water lines and electricity pylons and clean the soil of shrapnel from Israeli missiles.

Abu Shamala believes the agriculture sector will face great difficulty in recovering due to the destruction of more than 70 water wells and the bulldozing of about 34,500 acres [54 square miles] of agricultural land on the eastern border of the Gaza Strip.

The Food and Agriculture Organization (FAO) warned in a statement on Aug. 14 that the end of local food production strongly affects livelihoods, noting that the agriculture sector recovery will require concrete foreign and long-term support.

According to the FAO, “Gaza has lost half of its total poultry [chicken for food as well as those kept for eggs]. … The locally produced food represents an important source of food,” noting that 28,600 people depend on agriculture for their livelihood.

Moataz Thabet, a vegetable seller in the Sheikh Radwan market in Gaza City, explained that the high prices made people resort to buying vegetables that were going bad to get cheaper prices.

Thabet told Al-Monitor, “There is seldom fresh produce in the market and it is only the rich that buy this produce. Meanwhile, the old frozen goods are for the middle and poor classes — if they are lucky enough to be able to afford such goods.”

The director-general of the Ministry of Agriculture's General Directorate of Marketing and Crossings, Tahsin Sakka, told Al-Monitor that the lack of supply in the markets and the growing demand for significant agricultural crops has doubled prices.

He emphasized that the acute shortage in crops, poultry and livestock made people primarily depend on canned food provided by international institutions providing aid relief for Gazans.

The FAO reported in its statement that most of Gaza’s 1.8 million inhabitants are now dependent on food aid, noting that the World Food Program is helping about 1.1 million people on a regular basis together with the United Nations Relief and Works Agency for Palestinian Refugees in the Near East (UNRWA).

"In addition, about 700,000 people are now dependent on special food distribution through the Palestinian Ministry of Social Affairs, UNRWA and the World Food Programme," the statement read.