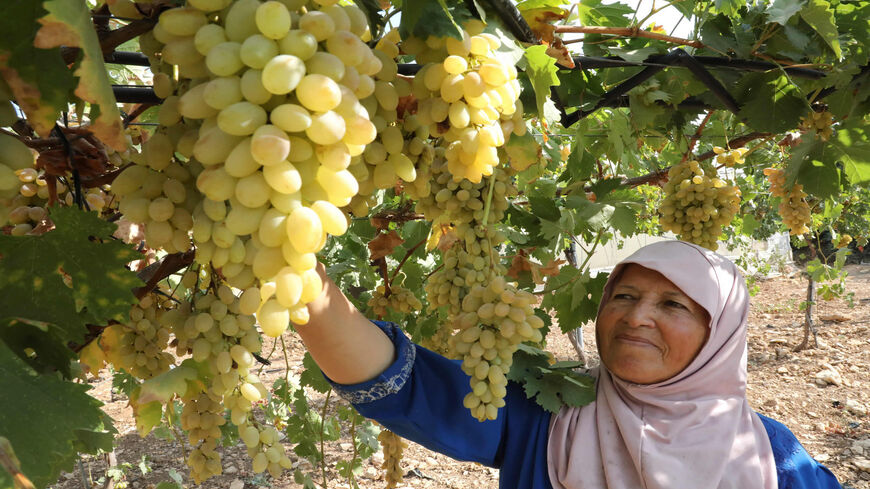 Palestinians complain that Israel is razing and burning agricultural crops, and undercutting the agricultural sector on which farmers depend with less expensive goods.

Some of the main seasons during which Israel deliberately inflicts financial losses on farmers are the grape and olive seasons; it floods the Palestinian markets in the West Bank with large quantities of those fruits at cheaper prices, hindering Palestinian production and encouraging Palestinian economic dependence on Israel.

The Palestinian grape picking season, which begins in August, in particular is threatened by Israeli competition. Israel grows crops in settlements near Palestinian cities and sends thousands of tons of Israeli grapes into Palestinian markets. Israel uses fertilizers and chemicals in grape cultivation to help the crop ripen quickly.

The Palestinian Authority (PA) prevents the import of grapes from Israeli settlements and criminalizes anyone who deals with Israeli goods to protect the Palestinian product. Regardless, the Palestinian market is largely overwhelmed with banned Israeli products that bear Israeli trademarks. Such products are smuggled by major Palestinian merchants in the late hours of the night to avoid Palestinian checkpoints.

Palestinian farmer and anti-settlement activist Mahmoud Abu Merhi, who owns a 5-acre vineyard, told Al-Monitor that the Palestinian grape season is one of the most famous agricultural seasons in Palestine, and Palestinian families celebrate it by singing traditional songs at the vineyards because this season brings abundant sustenance and fortune to farmers.

“However, we are dreading the grape harvest season; every year settlers deliberately ruin our vineyards and sabotage the season, whether by spraying crops with toxic pesticides that destroy them or by expelling farmers and their families from their agricultural lands,” he said.

Palestinian farmer Atef Abu Wadi told Al-Monitor that Israel is seeking to expel Palestinian farmers from their lands, and pressure them to leave this profession, which is passed down from generation to generation, so as to establish settlement outposts and expand on the lands of citizens near settlements.

He noted, “When Palestinian citizens go to the markets, they see large quantities of Israeli vegetables and fruits at prices that compete with the local product. In some cases, Israeli products are cheaper than Palestinian ones. Even if the quality is worse, citizens often end up buying the cheap Israeli products.”

Abu Wadi added, “Despite the heavy losses we endure, we as farmers will continue to cultivate our lands so that they are not confiscated and Israel achieves its goals.” He accused Israel of putting more restrictions on Palestinian farmers, as it recently started closing agricultural roads leading to the vineyards in Hebron, in the southern West Bank, which led to the isolation of 5,000 acres of land, most of which are planted with grapes.

The advanced Israeli agricultural equipment, chemicals, fertilizers and modern irrigation methods help Israeli farmers offer their agricultural products, especially grapes, about a month before the Palestinian products are introduced to the market. Israel bans providing Palestinian farmers with these technologies and materials, especially pesticides and chemical fertilizers that work to prolong the lifespan of the Palestinian grapes and improve their taste and quality.

Fathi Abu Ayyash, director of the Fruit and Grapes Council, told Al-Monitor that the Palestinian markets are invaded by about 27,000 tons of Israeli grapes that are characterized by their consistent ripening, which attracts the attention of shoppers.

Abu Ayyash explained that the competent authorities that monitor the markets suffer from a lack of financial resources, which has weakened the Palestinian ability to examine various goods and products. “We also lack mandatory technical standards for everything sold in Palestine, and we take little to no legal action against violators.”