Palestinians show off their grapes

The Palestinian agriculture sector aims to improve its grape production and promote it through festivals. 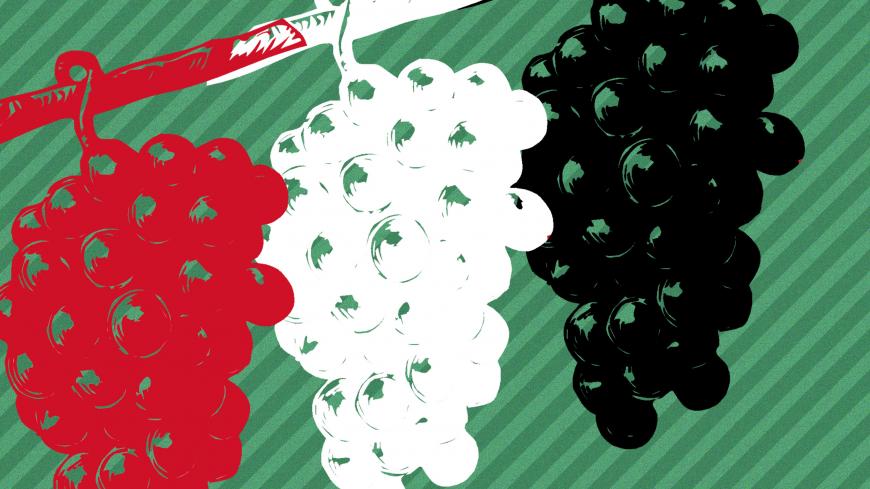 JENIN, West Bank — “There are regular grapes, then there are Jenin grapes,” boasts the slogan for Jenin’s first grape festival, reflecting this West Bank province’s desire to create awareness of Palestine’s second best-known product after olives.

The festival, which was organized by the Local Economic Development platform at the end of August in Jenin province, northern West Bank, aimed to introduce new varieties of Palestinian grapes that could enter the European markets and compete with other grape varieties globally. The festival also showed the history and current developments in grape cultivation in the Palestinian territories in general and Jenin in particular through products and workshops.

“We are trying hard to encourage farmers to plant different kinds of grapes in the Palestinian territories,” Fathi Abu Ayyash, the director of the Fruit and Grapes Council, told Al-Monitor, “We want to increase and improve the production of the existing grapes, especially between Aug. 15 and Nov. 15 when it is the high season for grapes.”

He added, “There are up to 50 types of Palestinian grapes, including white grapes such as Jandali and Hamdani, and red Damascene grapes. There are also seedless grapes that enter the market early in the fall and sell at a good price. Grape cultivation is concentrated around Hebron, which has the highest grape production in the Palestinian territories. In Jenin governorate, grapes are planted in the towns of Ya’bad, Qabatiya and Misilyah.”

Ayyash told Al-Monitor that grapes rank second after olives in agricultural production in Palestine, with 23% of the produce exported to Israel. Grape production constitutes 12% of the gross domestic product of Palestine.

He added, “There are many products derived and produced from grapes, and they are estimated at 12% of the total annual production. Around 4% of grapes are used to make raisins, and 8% is used for molasses, vinegar, jam, grape juice and lokum production. They largely contribute to reviving the Palestinian economic and trade activity.”

Ayyash said, “The next phase requires increasing agricultural spaces to produce sufficient quantities of Palestinian grapes by supplying special grape seeds. Seeds are sold to farmers at a low price to boost production. We can export grapes to support Palestinian farmers so that grapes become an economic and commercial product that has local and international renown.”

Chairman of Jenin’s Chamber of Commerce and Industry Hisham Massad told Al-Monitor, “Grape cultivation is part of our heritage. Farmers are struggling to ensure its continuity. Despite the difficulties, they continue to produce different types of internationally recognized grapes.”

Massad called on the Ministry of Agriculture to provide both subsidies and training to the farmers, and on the farmers to use new techniques to increase production. “We also suggest organizing workshops, lectures and panels to raise awareness regarding new technologies in agriculture and to support farmers to increase the planting of grapes,” he said.

He noted, “We want to organize several festivals in Jenin to display the products of Palestinian farmers and help them sell their crops. Consumers should also discover the different types of crops [that Jenin farmers produce].”

When asked about the main challenges facing grape farmers in the West Bank, Ayyash said that the Israeli settlements in the area had adverse effects. “The available farming space is being taken up by urbanization as Israeli settlers move in. Moreover, settlers attack the vineyards by letting out their pigs to ruin the crops. Settlers also attack farmers who are picking the grapes. Consequently the produce is ruined because the farmers are unable to pick it in time,” he said.

He added, “Water resources are scarce, market sales are tough and the production cost is on the rise. All these factors have affected grape agriculture and pushed the new generation away from it."