Vivien Sansour discovered the need to protect Palestinian seeds while looking for red carrots six years ago and opened a seed library in Beit Sahour; the library will soon move its permanent headquarters to Battir. 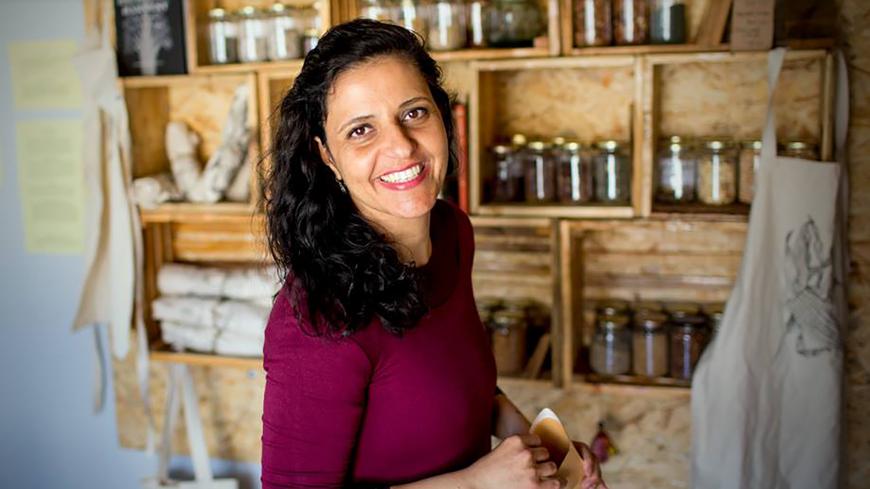 Vivien Sansour, founder of the Palestine Heirloom Seed Library, is seen with some of the heritage seeds she has recovered in this photo uploaded June 19, 2018. - Facebook/Palestine Museum US

Stuffed red carrots used to be her favorite dish from her childhood in the 1980s, so when she returned from the United States to Palestine in 2013, she went to the local market to buy a few. “I searched all over the market in Beit Jala but was told that red carrots were no longer available anywhere. I finally came across a vegetable peddler, who told me that I have to order them beforehand so he can get them from another vegetable peddler who sold them on demand,” she told Al-Monitor. “Finally, I returned home with two because that was all they had.”

She continued, “I had two options — either to stuff and cook the carrots and enjoy my favorite stuffed red carrots, a Jerusalemite dish popular in the West Bank, or to plant them and extract seeds.”

The two carrots in her hand demonstrated to her, beyond statistics, how some of the plants and seeds of Palestine were on the way of extinction. “Their loss would mean the [end] of the tastes and colors of my heritage, my own Palestinian identity. Growing crops and farming are a central theme in Palestinian culture. So I decided to protect what I could get my hands on,” she said.

Within a year, Sansour founded the Palestine Heirloom Seed Library to work with Palestinian farmers to ensure that the vegetables of her childhood would reach the coming generations. The library, located in Beit Sahour, east of Bethlehem, aims to preserve Palestinian local seeds that have been pushed to the brink of extinction, particularly after various hybrid seeds swept the Palestinian markets. Farmers across the West Bank can come to the seed library to borrow seeds and learn, through workshops, how to grow them.

Born and raised in the Palestinian town of Beit Jala west of Bethlehem, Sansour grew up playing in the orchards around her home. She then went to the United States to study anthropology, political science and theater at East Carolina University. Her work as a producer, writer and photographer took her to agricultural communities across the world — in Honduras, Uruguay and Palestine. After returning to her homeland, she wrote about the lives of Palestinian farmers for international publications. She also began connecting with farmers through her Facebook posts, and then visited their land and acquired some rare seed varieties.

Sansour’s journey to establish an heirloom seed library was a bumpy one. Not everyone around her understood her quest, since she had a good and steady income working as an agricultural writer and photographer for the Canaan Palestine Company.

Her plan was to establish a collective initiative with the farmers who would “borrow seeds” from the library. She received a donation from the Qattan Foundation and tapped into her own savings. In a short time, farmers and growers started borrowing seeds from the library to plant and produce crops. Then they would also donate seeds to be passed down to the coming generations and to encourage local diversity.

Khader Shawky Khader, a farmer from the town of Nisf Jubeil, north of Nablus, was among the first to get in touch with Sansour. Ever since he started working in agriculture in 2008, Khader had relied on organic farming. With the help of Sansour, he switched to heirloom seeds, such as white cucumbers, that once grew once across Palestine and were handed down by Palestinian farmers for many generations.

Today, Khader has carved out a niche for his organic and heirloom products in Nablus. His plans include selling his produce to one of the city’s hospitals to be used for hospital meals, especially for cancer patients.

Khader told Al-Monitor that he now cultivates many vegetables he did not know existed in the southern West Bank. Both he and Sansour take pride in the fact that her efforts are paying off and that seeds that had been on the verge of extinction are back in the fields.

Sansour said these products are more suitable to the land than imported seeds. ”These seeds grow in our climate … [and] also withstand harsh conditions, such as drought and lack of water,” Sansour said.

Sansour also works on forging partnerships with companies, organizations and individuals abroad who also want to protect local seeds. Her library has just started cooperating with the Experimental Farm Network, an American nongovernmental group that advocates innovation in sustainable agriculture by facilitating unprecedented collaboration on research and the free sharing of resources. She has obtained from them a sample of an ancient wheat that used to grow in the Gaza Strip — and she now aims to see if it can grow in the West Bank.

Sansour also plans on opening local branches of her library in the coming months. Her first step will be transferring the library from Beit Sahour to a permanent headquarters in the agricultural town of Battir west of Beit Jala in March.