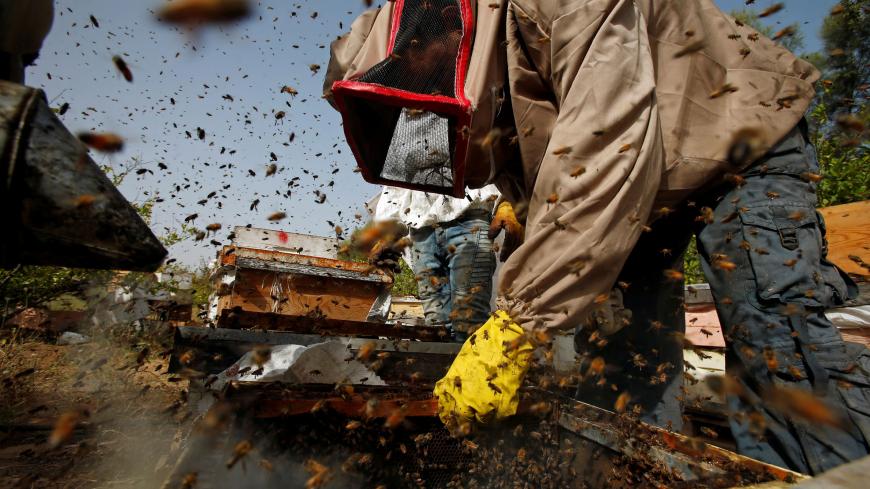 A Palestinian beekeeper removes bees in the process of collecting honey at a farm in Gaza City, Gaza, April 29, 2019. - REUTERS/Suhaib Salem

GAZA CITY, Gaza Strip — Ibrahim Abu Freina, a Palestinian farmer from the town of Beit Hanoun in the northern Gaza Strip, heads out to his 10 acres of land every morning to check on his crop of zaatar, popularly known as wild thyme.

Abu Freina, 35, boasts of being the first farmer in the Gaza Strip to grow and produce zaatar, which is often used to make the condiment that goes by the same name. He started planting the herb two years ago.

“I had three dunams (0.7 acres) of land, where I had olive trees and grapevines, and I used to sell the crops on local markets for a pittance, nothing more than 6,000 shekels ($1,700) per year," he said. "I could barely make ends meet. I decided to look for an additional source of income, so I went to the Ministry of Agriculture in Gaza in mid-2017 and rented 40 dunams of land for $8,000 a year. I planted it with zaatar with the help of my five children.”

Though common in the mountainous areas of the West Bank, zaatar does not exist in Gaza Strip. Abu Freina’s attempts to grow it raised some eyebrows. He also invested in a special grinder so he can sell zaatar as a condiment. Some local apothecaries also buy it as a remedy for throat congestion, asthma and chest pain. The crop ended up providing a good income, Abu Freina said.

Zaatar is considered an heirloom seed, valued because it requires little irrigation except seasonal rain. With one kilogram (2.2 pounds) of zaatar sold at 15 shekels, and one dunam yielding between 1.5-2.5 tons of zaatar annually, the profit margin can be as high as 2,500-3,000 shekels once agricultural expenses are deduced.

Since 2008, the government of Gaza has granted farmers government-owned lands for agriculture, some 35,000 dunums in total, near the Israeli border. Annual rent ranges between $200 and $500 per dunam. International bodies such as the Red Cross also support this project by providing loans to farmers.

“As part of its plan to achieve self-sufficiency in any agriculture and husbandry, the ministry is offering incentives for farmers, starting with renting out government lands to boost local production and to decrease reliance on Israeli imported goods,” Adham Bassiouni, spokesman for the Ministry of Agriculture in Gaza, told Al-Monitor. “With these incentives, the ministry made a breakthrough in the Gazan markets, which now totally rely on vegetables grown in Gaza such as tomatoes, potatoes, eggplants and pumpkins.”

Gaza’s herb and vegetable growers are not the only ones who have benefited from the incentives. In the West Bank, beekeepers are also getting back on their feet through the Ministry of Agriculture's funding. The beekeepers have demanded the Palestinian government offer them incentives to market local honey, both at home and abroad. They also called for government support to overcome Israeli obstacles that have prevented them from reaching their hives, as well as to help face the competition from Israeli honey, which they say is inferior.

“The Ministry of Agriculture pays great attention to the development of the honey market in the West Bank," Walid Lahlouh, director of the Beekeeping Department at the Ministry of Agriculture, told Al-Monitor. "Since 2014, the ministry has been distributing thousands of beehives to families wishing to start honey farms to boost this vital industry.”

Lahloul believes that Palestinian honey is competitive and has a niche in the region and beyond. “Given its top quality, Palestinian honey found a niche on the markets in Qatar, Kuwait, Italy, Lebanon and Southeast Asian countries. Palestine has 84,000 beehives, 61,000 of which are in the West Bank and 23,000 in the Gaza Strip.”

Side products — such as bee venom — are also sold locally and exported. “Honey is used in the production of hair and skin creams," he said. "We also sell sweet bee venom, which is used for potency. Apothecaries use bee venom to treat skin diseases and for antibiotics to treat asthma.”

Honey production was abundant in 2019, Lahloul said. "The average hive production increased from 16 kilograms last year to 20 kilograms this year. The average price of one kilogram of honey is estimated at 60 shekels, which is a competitive price that would allow beekeepers to export their products to foreign markets.” 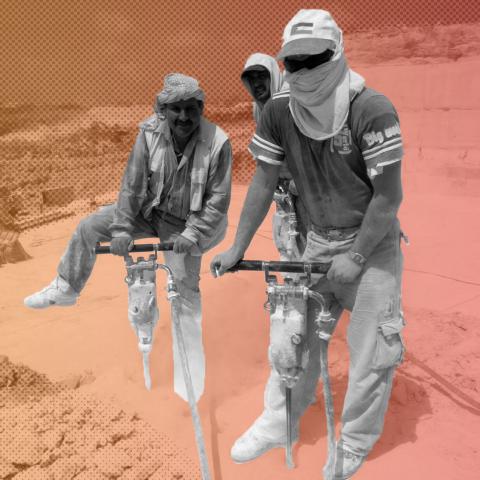