Beekeepers in Gaza are currently experiencing a low in honey production due to the latest Israeli war on Gaza, during which the Israeli army destroyed vast agricultural lands. 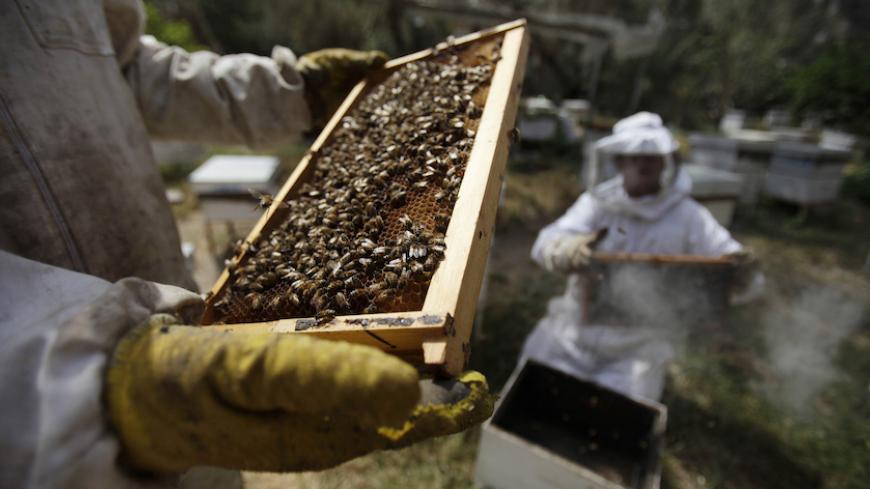 A Palestinian beekeeper checks a honeycomb before collecting honey at a farm in Rafah, in the southern Gaza Strip, April 9, 2013. - REUTERS/Ibraheem Abu Mustafa

GAZA CITY, Gaza Strip — Muhannad Hamid waits an entire year for the honey harvest season, which falls annually between April 20 and May 10. During this period, Hamid makes the most profit from honey collection. However, this year, it seems he won’t make any profits, as production has decreased compared with previous years.

Hamid, 42, owns several beehives in the town of Beit Hanoun on the northern border of the Gaza Strip. These beehives are his family’s only source of livelihood. He told Al-Monitor with frustration, “What I never expected actually happened. My farm’s production for this year was no more than 300 kilograms [661 pounds] of honey, while in normal [times], the amount of honey reaches 750 kilograms [1,653 pounds].”

He explained that the Israeli war on Gaza in July 2014 caused the destruction of 20 of his 50 beehives, costing $220 each. Hamid said that the losses he incurred following the war totaled $4,400.

“Hive maintenance and honey collection are a practical project that I began preparing for two years ago, to provide a source of livelihood for my family, in light of the increasing unemployment and poverty,” he said. “However, due to the losses I had to endure this season, I will have to look for another job, despite the scarce job opportunities at the moment.”

As a result of the recent war, the annual output of the bee sector decreased to its lowest levels yet this year, incurring $3 million in losses, according to Taher Abu Hamad, director of the Ministry of Agriculture’s Animal Production Department.

“The natural production of honey in the Gaza Strip amounts to 220 tons per year,” Abu Hamad said. “But this year, it will not exceed 170 tons due to the Israeli war, which destroyed more than 8,000 beehives out of 20,000, and killed a large number of bees with the use of shells, bombs and rockets against Gaza.”

“The occupation army scraped vast agricultural lands in the border areas, destroying lemon, orange, pomegranate and peach trees, upon which the bees relied to extract nectar for honey production, leading to a shortage of production,” he said.

Abu Hamad said that of the Gaza Strip’s 450 beekeepers, 300 depend on the sector as their sole source of income. During honey collecting season, 500 additional individuals work in this sector.

Rateb Sammour, the head of Gaza’s Beekeeping Association, said that the Israeli blockade, in addition to the war, has led to the deterioration of Gaza’s bee sector. The blockade has hampered access to imported Italian bee queens, which help improve the swarm’s honey production. “Beekeepers are affected by the Gaza Strip’s small land, which is equal to 360 square kilometers [223 square miles] and is home to around 2 million people,” Sammour said. “This means a continuous increase of urban expansion at the expense of agricultural lands.”

Gazans used to make several products from honey surplus, according to Sammour, including creams, shampoo and wax, yet the current lack of honey production and its failure to cover the residents’ needs has frozen the making of these products.

Abu Hamad said that Gaza’s honey needs amount to 500 tons per year. However, Gaza has produced only 170 tons this year, in addition to the 50 tons imported yearly from abroad, namely from Israel and Italy, to fill potential shortfalls.

Ahmed Abu Omar, a leading honey dealer in the Gaza Strip, described the Gazan demand for honey as “dense and growing.” Gazans believe honey cures many diseases, as it is mentioned in the Quran’s Sura an-Nahl (Sura of the Bee), “From their bellies comes a drink of different colors, wherein there is healing for the people.”

“Although the average price of 1 kilogram [2.2 pounds] of honey costs 80 shekels [$20] — which is a hefty amount for the Gazans — the demand is increasing as each Gazan family consumes 8 to 10 kilograms [17 to 22 pounds] of honey per year,” Abu Omar said.

The growing interest in honey among Gazans, he said, is due to its use as a substitute for chemical treatments for symptoms of various illnesses, such as coughing, infections, sexual impotence, marasmus and hair loss. It is also used in cosmetics to brighten skin and remove freckles, in addition to facial masks to get rid of pimples and dark spots.

There are skilled specialists who make herbal blends with honey to use as medicine for illnesses, and residents continuously consume them.

Sammour believes that for Gaza’s bee sector to get back on its feet it needs more agricultural lands and more trees, such as eucalyptus, carob and citrus. Furthermore, beekeepers and hive owners should be compensated for the losses they incurred during the war. Sammour called for the establishment of a specialized center in Gaza for research and studies to improve the bee industry.