Honey production, a long tradition in the Aleppo countryside, is showing signs of recovery. 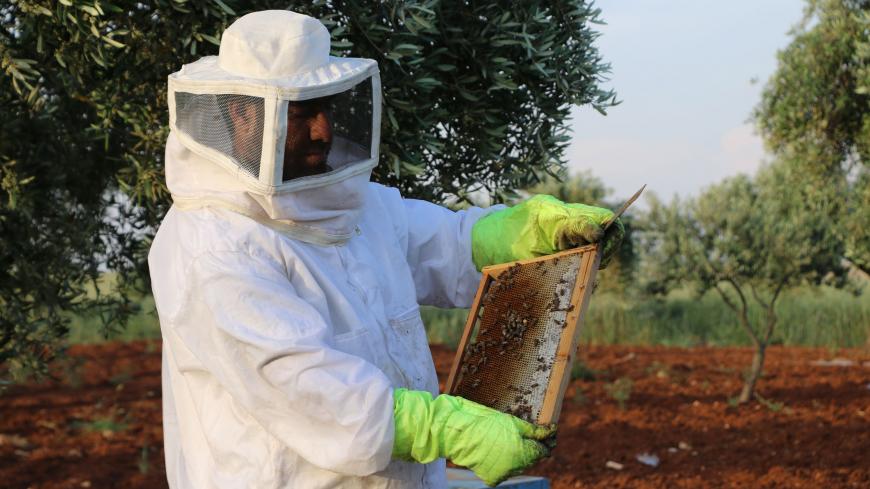 ALEPPO — Mohammed Khattab inherited beekeeping from his father. Through eight years of conflict, war and economic difficulties, he has struggled to keep his hives going. A native of the town of Marea, in the northern Aleppo countryside, Khattab calls his hives “the greatest legacy” from his father.

Beekeeping is one of the oldest professions in the Aleppo countryside, whose mild climate and fertile plains are favorable for bees. The region, particularly in the north, is well known for its light-colored honey, often with undertones of the fennel and coriander found in abundance there. The beekeepers also boast about the nutritional value and health benefits of their honey.

Unsurprisingly, the civil war that erupted in 2012 sent beekeeping and honey production into decline. This was largely due to the unavailability of the treatments used to protect bees from pests and diseases that can negatively affect production if not controlled. A drought in the region delivered a further blow last year.

Despite recent hardships, local beekeepers are hopeful that a promising season lies ahead after a long rainy winter. They have also been able to import equipment and other supplies from Turkey with the return of relative stability to the countryside.

“I inspect the beehives I own on the outskirts of the city and keep track of honey production,” Khattab told Al-Monitor. “Beekeeping is not tiring, and it does not cost much. The bees only need a fertile pasture filled with flowering plants and trees to collect nectar and turn it into honey. This [profession] is the greatest legacy my father left me.”

Khattab has 50 beehives at the moment, almost half the number he had before the war, when he would put them in the back of his truck and transport them to pastures in other provinces. He now rents a truck to move the hives around the Aleppo countryside in search of flowers and fertile lands.

“When flowers in grasslands and orchards in Aleppo's countryside would become scarce, I would move my beehives to a fertile area on the Syrian coast, near Latakia, or to the Jisr al-Shughour plains, west of Idlib, where lemon and orange trees are abundant,” Khattab explained. “But this is all in the past. Given the security risks, beekeepers can no longer freely move to other Syrian provinces.”

Khattab, nonetheless, remains hopeful. “I think the 2019 season will be productive,” he said. “There are fertile pastures in the countryside of Aleppo, and the flowering plants and trees are very diverse and provide enough food for bees. The plants that provide flower nectar for bees are mainly anise, coriander, fennel and cotton, in addition to lemon, cherry and prunus mahaleb, also known as mahleb cherry, trees.”

Al-Monitor traveled to Dabek, north of Aleppo, to visit the bee farm al-Rahiq al-Makhtum, which means “sealed nectar.” The farm is owned by Mohammed al-Marei, who also serves as secretary of the local Free Beekeepers Association.

“I have been working in beekeeping for many years, and I have extensive experience in this field,” Marei told Al-Monitor. “The beekeepers association was founded in March 2017 in Dabek, in the northern Aleppo countryside. It provides services to beekeepers, conducts scientific and practical seminars in which various problems are raised, introduces beekeeping methods, works on advancing the profession, develops bee-rearing methods aimed at increasing production, and encourages the exchange of experiences among beekeepers.”

At least twice a month, Marei and other members of the Free Beekeepers Association tour apiaries in the countryside, in Azaz, Jarablus, al-Bab and Marea, to advise beekeepers and offer them assistance. Their association is unaffiliated, independent of any governing administration.

“Every day I inspect the beehives,” Marei told Al-Monitor while touring his farm in Dabek. “I provide some water and give the bees what they need to continue to produce honey.” Marei’s 100 beehives produce a large quantity of honey, which he sells in nearby areas for 6,000 Syrian pounds ($12) a kilogram.

Several types of bees are kept in the northern countryside. Syrian bees, or so-called al-Zumor bees, are the most prevalent. There are also foreign, Caucasian and Anatolian honeybees. Some local beekeepers have begun to use high-tech sensors imported from Turkey that collect data about the hives, such as temperature, humidity and carbon dioxide levels, to help ensure that conditions are kept optimal for producing large quantities of honey.

Ali Najjar, director of the agricultural office of the local council in Marea, told Al-Monitor, “Beekeeping and honey production are very important in the region, yet local institutions are not giving them the attention they deserve. The agriculture office in Marea is trying to develop the work of beekeepers. More than 2,000 beekeepers in the northern Aleppo countryside earn their living from this profession. Some of them have a limited number of beehives, no more than 20, and others have large bee farms of more than 100 beehives.”

Najjar said that in March the agricultural offices of local councils in the Aleppo countryside distributed beehives to a number of poor families with the goal of creating sources of income, which would also have the added benefit of expanding beekeeping as a profession.

“The distributed beehives were provided by the Turkish Ministry of Agriculture,” Najjar explained. “A number of beekeepers were also offered special clothing and protective treatments by the ministry as a gift.”