Israeli beekeepers are concerned about shrinking living spaces for bees, the challenges of wild bees and nature preservation activists. 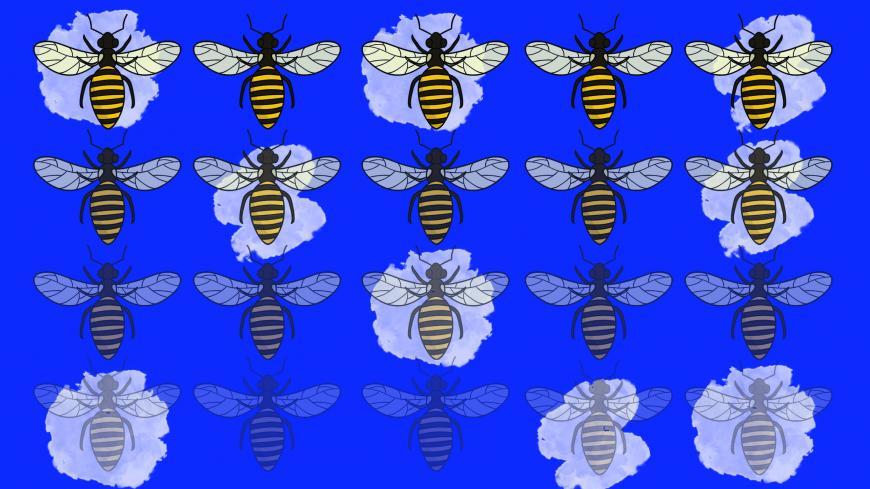 Jews around the world traditionally eat honey on the eve of the Jewish New Year as a symbol and blessing for a sweet new year. Consequently, honey consumption in Israel skyrockets as the new year approaches. According to figures released by the Israel Honey Council, the holidays during the Hebrew month of Tishrei (September-October) account for some 40% of honey consumption in Israel. About 1,600 tons of honey are consumed during this period alone. Some groups, however, are concerned by these figures. They argue that honeybees pose a threat to the wild bee population.

"Pollen is the source of sustenance for bees," said Sharoni Shafir of the Faculty of Agriculture, Food and the Environment at the Hebrew University of Jerusalem. "Over the past few years, the natural habitat of bees has been shrinking as part of a worldwide phenomenon. Wild bees — meaning bees that tend not to live in colonies — find themselves fighting with honeybees for the same food sources to sustain themselves."

According to Shafir, there are about 25,000 different species of wild bees in the world, with over 1,100 species — a relatively large variety — in Israel alone. "We live in a region very rich in bees, but some of the wild bees here have already gone extinct, due to a loss of food sources," he said.

One group waging war against honeybees and their beekeepers is the Society for the Protection of Nature in Israel. In June, it published a detailed document that presents the risks that honeybees pose to the wild bee population. The document, titled "The Impact of the Honeybee Habitat on Wild Bees and Nature in Israel," was written by Achik Dorchin of the Hebrew University. Dorchin claimed in the report that honeybees cause severe environmental damage to the wild bee population and to various wild plants. In contrast, pollination of these plants (such as the purple iris) by wild bees is far more effective, he said. The document recommended introducing regulations to remove honeybees from the natural habitats of wild bees, including a buffer zone of at least 2 kilometers (1.2 miles) between honeybee hives and nature reserves.

Joining the call to keep a distance between honeybee hives and nature reserves is Yehoshua Shkedi of the Israel Nature and Parks Authority, although his reasons are slightly different. Shkedi told Al-Monitor that he does not believe the current research is unequivocal in determining that honeybees threaten wild bees in Israel. He claims that the presence of beehives, with the beekeepers' comings and goings, harms the natural environment in its surroundings. The beehives scare visitors, which keeps the visitors from coming. Shkedi also described situations in which beekeepers placed their hives in the migratory paths of European bee-eaters (Merops apiaster), a migratory bird that, as its name indicates, feeds on bees. As a result, the beekeepers harm the birds to save their bees.

Shkedi said that he has been attacked by beekeepers after ordering that eucalyptus trees be chopped down. While the trees are a source of nectar for honeybees, Shkedi said, "Eucalyptus trees are an invasive species from Australia. They take up space at the expense of local species, whereas the Israel Nature and Parks Authority promotes the protection of natural ecosystems in our nature preserves. Our policy with regard to foreign and invasive species is dictated by international standards and intended to protect nature."

Meanwhile, beekeepers feel increasingly persecuted. One of them said on condition of anonymity that Shkedi is "talking out of his hat." Ze'ev Meidan, the director general of the Israel Honey Council, told Al-Monitor that the war against honeybees is the result of "dishonest demagoguery, which is not based on scientific fact." He said there has yet to be any serious research to support these claims. Shai Spector, the former chairman of the Organization of Beekeepers, was even more blunt, saying, "The Israel Nature and Parks Authority is not interested in Israel's food industry. All they care about is their own little space. Even if there is minor damage to the wild bee population, it is dwarfed by the contribution of honeybees to Israeli agriculture."

Spector quoted figures from the Ministry of Agriculture, which claimed that honeybees are responsible for the pollination of some 40% of food crops and of many other plants consumed by animals in nature. "Bees contribute some 2.5 billion shekels [$712 million] to Israeli agriculture per annum. Indirectly, they contribute some 5 billion shekels [$1.4 billion] per annum. The honey market brings in 100 million shekels [$28 million] every year. In other words, the contribution of honeybees is disproportional to the sums they bring in." According to figures provided by the Israel Honey Council, there are some 500 beekeepers in Israel, tending to some 100,000 hives throughout the country. Of these, about 60,000 hives are located in agricultural areas, where the bees pollinate wild flowers and other plants.

In a study conducted by Haifa University, researchers attempted to test whether there is, in fact, competition between honeybees and wild bees in Israel. What they discovered was that while there is competition, there are also "understandings" between the different bee populations. Ofrit Shavit, who conducted the study, told Al-Monitor that honeybees do, in fact, drive wild bees out of their natural habitats. "But at the same time," she said, "in some cases, the bees found a kind of 'peace arrangement' between themselves, in which they divide the flowers among themselves spatially."

It seems as if the hawks on both sides of the bee debate have reached some kind of agreement, just like the bees themselves. Both Shkedi and Spector are unhappy with the Ministry of Agriculture, saying that while the ministry is aware of the enormous contribution of honeybees, it is not doing enough, particularly when it comes to planting trees, including eucalyptus trees (outside of nature reserves), to provide for the pollination of crops. If it fails to take action, they warn, within a few years, the Ministry of Agriculture will have to support the beekeepers in order to save agriculture.

As far as Spector is concerned, these days the Ministry of Agriculture simply doesn't care about the issue. "The minister of agriculture may be interested in rebuilding the Temple [in reference to religious Agriculture Minister Uri Ariel], but bees don't interest him. They [the ministry people] are fighting against us. They've turned us into thieves. I feel frustrated," he told Al-Monitor.