Gaza is watching its bee populations plummet and accuses Israel for irresponsible or even malicious use of insecticides. 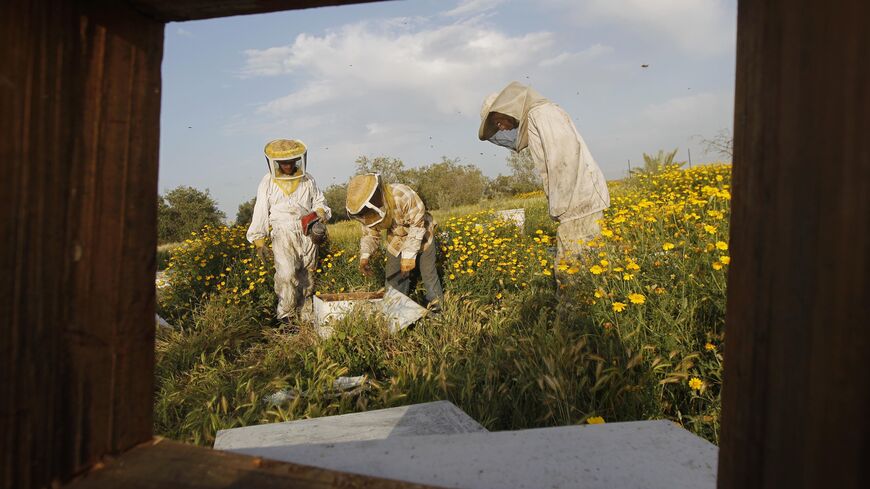 Young Palestinian men work on the farm of beekeeper Ibrahem Shurab in Khan Yunis, in the southern Gaza Strip, near the Israeli border on April 9, 2014. - SAID KHATIB/AFP via Getty Images

GAZA CITY, Gaza Strip — The Gaza Strip is witnessing a major decline in the bees that used to swarm farmland and gardens across the coastal enclave.

Many Gazans accuse Israel of the deliberate killing and displacement of bees by spraying toxic pesticides near apiaries and flowering trees in border areas, which have also been heavily bulldozed in the name of security.

Honey production represents an important field of agriculture in the Gaza Strip. It is also one of the least expensive products, needing only access to the nectar of flowering plants.

However, the sector is also one of the most affected by Israeli activities, as most production takes place along the border with Israel.

As a result of urban sprawl and a lack of farmland in Gaza, many beekeepers place hives on the eastern border with Israel, where many crops are grown on Israeli territory. The bees freely cross the border and return, also pollinating crops inside the Gaza Strip.

Gaza has two honey seasons, in spring and summer. The spring season, when flowers are plentiful, produces honey of a higher quality and in greater abundance. In summer, flowers are almost nonexistent and beekeepers must feed sugar to the bees, negatively affecting the honey's quality and quantity.

According to the Ministry of Agriculture in Gaza, so far, the year 2022 has seen a decrease in honey production, with only 50 tons of honey compared to the usual 200 tons in previous years.

According to the ministry, the decline is due to many reasons including Israel targeting beehives and the surrounding farms with toxic pesticides and leveling the lands, in addition to weather fluctuations, which have caused the death of some bee populations and the migration of others.

Apiarist Ahmed Wafi owns 55 beehives. He told Al-Monitor that this year he was only able to produce five kilograms of honey compared to about 13 kilograms last year.

“The Israeli practices are the main reason behind the destruction of the honeybee production season. The bulldozing operations of agricultural lands and the pesticides sprayed on trees and flowers caused large numbers of bees to perish, which drastically decreased production,” he lamented.

Wafi added that the decline in production will hurt citizens who are eagerly awaiting the new harvest, as many use local honey in cooking and even in treating diseases and are reluctant to buy imported honey, which they deem of low quality compared to the local product.

Israeli actions in the area are threatening to destroy the profession in Gaza. There has also been an enormous hike in beehive prices, in addition to the risks and dangers facing beekeepers along the border, where they could be shot at by Israeli soldiers deployed on the frontier.

Farmer Jamal al-Daya used to own 130 beehives but had to give up this business after his apiary was destroyed by Israeli warplanes during the last round of fighting with Israel in May 2021.

“I don’t think I’ll go back to the same business. The honey production has declined with thousands of bees perishing, not to mention the increase in beehive prices, with the price of one box reaching 600 Israeli shekels [$180] compared to 200 shekels [$60] before,” he told Al-Monitor.

Imad Ghazal, the head of the Cooperative Society of Beekeepers in Gaza, said that the beekeeping sector is one of the Gaza Strip's most important agricultural sectors that employs about 320 beekeepers.

He added that the coastal enclave is home to some 18,000 hives spread along the eastern borders, with an annual production of 200 tons of honey, a quantity that meets 80% of the local demand.

“The production has drastically decreased due to Israeli harassment,” Ghazal told Al-Monitor.

“Palestine’s honey is considered some of the best in the world, especially date, and Sidr honey. Palestine is also a destination for bee populations, where the climate is moderate and agricultural crops are abundant. Israel, however, has been deliberately trying to destroy this sector,” he said, blaming its activities for a sharp drop in production and lower quality honey.

Ghazal added that the decline in honey production this year was expected, as a result of the repeated spraying of agricultural crops with pesticides by Israeli planes.

“Quantities are likely to decline even more in light of the heated and tense security situation in Gaza, and the possibility of a military escalation that threatens most apiaries with destruction,” he said.

“There are dozens of beekeepers who gave up on their occupation during the past few years as a result of the repeated destruction of their apiaries, in addition to Israel preventing the importation of antifungal treatments, most notably Varroa, under the pretext of the dual use of these drugs, which could allegedly be used in the military resistance. As a result, thousands of bees have perished, production has taken a major blow and financial returns were slashed,” he said.