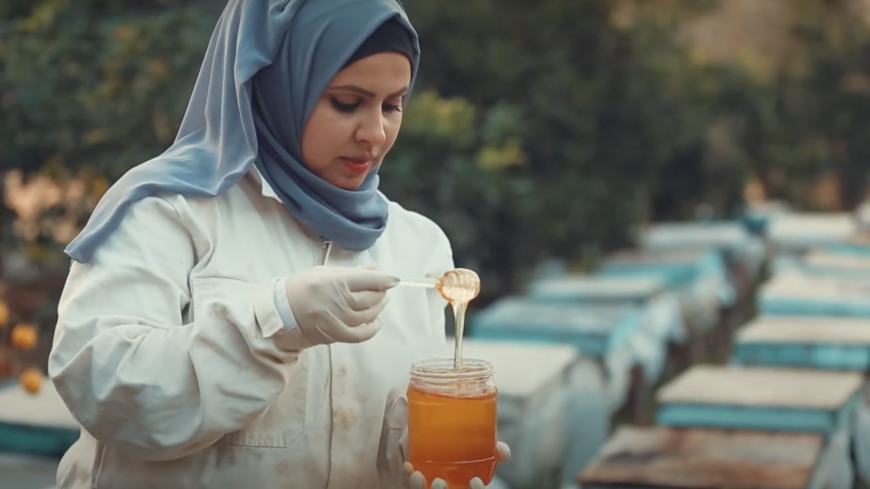 Samar al-Baa inspects honey collected from her beehives in Beit Hanoun, Gaza Strip, in a still from a video uploaded May 30, 2021. -

BEIT HANOUN, Gaza Strip — About 1,000 feet from the fence separating the Gaza Strip and Israel, Samar al-Baa, who is the first female beekeeper in Gaza, is busy checking beehives and extracting honey.

Baa’s father, Othman al-Baa, was a famous farmer and beekeeper in Beit Hanoun village in the northern Gaza Strip, but he was killed by an Israeli missile that hit the land while he was collecting honey in 2006. Following their father's tragic death, the family abandoned the land, and the apiary was left behind.

After having been jobless for five years after graduating, Baa, 31, decided to restore her father's apiary.

According to the Palestinian Bureau of Statistics, the unemployment rate among the youths with a degree increased in the first quarter of 2022: 27% of the 19- to 29-year-olds with an Associate Diploma Certificate or higher in the West Bank are unemployed and 75% in the Gaza Strip.

In 2013, Baa earned a bachelor's degree in education from Gaza’s Al-Quds Open University, but she now makes a living with the beekeeping skills she learned from her father when she was 13 years old.

“I always accompanied my father to the field and learned from him in my childhood — where the area was full of eucalyptus, citrus trees and flowers before it was bulldozed by the Israeli army in the continuous incursions over the past years,” Baa told Al-Monitor.

She said, "The area has changed. Gaza lacks the appropriate environment for bees to feed, so we now place the beehives near the border so that they can cross to the Israeli side where the trees are flourishing, and they can find better feed."

Baa rehabilitated six empty beehives in 2018 and added another seven hives from her own savings. She managed to expand the number of beehives to 65 by the beginning of 2021, but the area was exposed to Israeli bombardment again during the last war on the Gaza Strip in May 2021.

"I found the bees dead on the ground and inside the hives," she said of the destruction of 27 beehives.

“Even the honey production that I didn’t manage to harvest before the war was poisoned by the shrapnel of missiles and gas bombs that reached the area,” she added.

With the help of her brothers Baa restored the apiary and cultivates medicinal aromatic plants, such as thyme, sage and moringa, as a basic source for the bees' feeding.

In May, she harvested 35 hives with a total of 120 kilograms (264 pounds) of honey, which she is marketing to various types of customers.

At the outset of her career as a beekeeper, Baa faced a number of challenges, the first of which was society's opposition to her work in what they refer to as a men's profession, and the fact that the workplace is extremely dangerous.

"After my father's martyrdom, no one in my family accepted the idea of working in the border area," Baa noted. “I come to work when the area is bustling with people and farmers to reduce the risk of being alone.”

Ayesh al-Shanti, director of the Department of Animal Production at the Ministry of Agriculture in Gaza, agrees with Baa. He told Al-Monitor that due to the bulldozing of agricultural lands, many farmers are placing beehives near the border so that bees can feed on trees on the Israeli side. But this is not an easy mission.

"Israeli planes spray the border areas with pesticides aimed at burning field crops to clarify the vision for the Israeli soldiers. This leads to the killing of large numbers of bees on their way to search for food," he said.

Shanti explained that during the field visits to assess the damage after the devastating 11-day war in May 2021, “the ministry found 30% of the apiaries were greatly affected and the majority of the bees had died, due to the gases or the sound of bombardments.”

He pointed out that the Israeli authorities open the water pumps of the dams on the Gaza border each winter, which causes the beehives to sink.

Shanti said, "We are constantly working to improve the bee species and introducing new species to the farmers that can produce more quantity and quality honey. But the Israeli measures hinder the entry of improved equipment and queens into Gaza.”

He added, “The Israeli authorities also impede the introduction of veterinary drugs to the Ministry of Agriculture.”

Baa dreams of developing her apiary with more tools and hives, and adding a greenhouse to grow aromatic plants to feed the bees throughout the year.

She has become a role model for other girls and women in her area and throughout the Gaza Strip, as many families in the conservative Beit Hanoun village are sending their daughters to learn from Baa at her farm.