As spring begins, Gaza's beekeepers face a decline in production due to urban sprawl and a lack of official interest, reports Hazem Balousha. 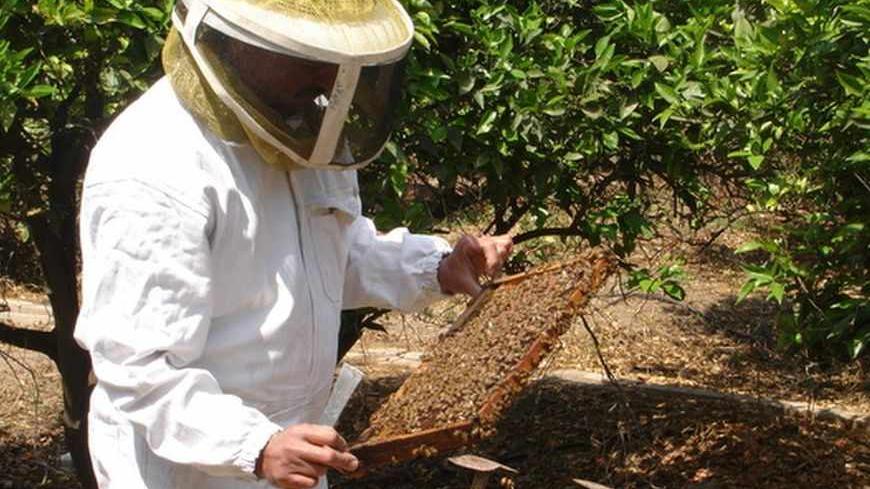 In an agricultural area teeming with orange trees in the Tufah neighborhood east of Gaza City, Imad Ghazal lifts honeycombs out of his beehives, which produce the combs throughout the year. He will move them to a machine for extracting the honey, which is then put into cans of different sizes and sold in the local markets.

Ghazal began working as a beekeeper more than 20 years ago. He had previously spent several years working in the same field in Israeli beekeeping farms, during which time he pursued a degree in theoretical and practical beekeeping and honey production at the Volcani Institute of Agricultural Research.

There are nearly 300 beekeepers and honey-production workers in the Gaza Strip. They own approximately 20,000 beehives, each producing around 10 kg (22 lbs) of honey per year. The total domestic production in the Strip reaches almost 280 tons and covers 60% of local demand.

The honey-production cycle in Gaza consists of several stages starting from May each year, during which wooden bars are prepared for the bees to occupy. From Israel, the bee-farm, or apiary, owners import Italian queen bees and crude wax, from which the bees build their hexagonal honeycomb cells. The wooden bars are kept in the prepared wooden boxes and placed in green pastures. In winter, when the bees cannot leave their hives due to the cold weather, they are fed until harvest season in April.

Gaza mainly depends on Israeli experience in the field of honey production and for obtaining beekeeping supplies, which are all imported from Israel, says Ghazal, the president of Gaza's beekeeping association.

The honey-production sector encountered difficulties in the Gaza Strip under the first years of the blockade, after the apiary owners were prohibited from entering Israel to import queen bees and various supplies, a situation that has changed over the past three years.

Ghazal told Al-Monitor that during the blockade, Israel did not end the joint cooperation to combat disease among the bees, and medication continued to be sent, for fear that these diseases would be transferred to Israeli farms from the besieged Gaza Strip.

He explained that during the first years of the blockade, beekeepers in Gaza tried to import supplies from Egypt, but they were surprised by their significantly poor quality compared to those imported from Israel, which lead to significant financial losses during that period.

Honey producers in Gaza complain about the lack of interest from the government, the Ministry of Agriculture and local and international civil institutions, due to their focus on other sectors, especially fisheries.

In a move to support Gaza’s bee farmers, the Hamas-led Ministry of Agriculture recently decided to ban the smuggling of honey from Egypt via tunnels during the harvest season. Egyptian honey is very cheap, which has led local consumers to buy the smuggled products rather than locally produced honey.

At the start of spring each year, harvesting begins. Honeybee farmers extract honey in addition to beeswax, pollen, royal jelly and propolis to market them at the local level.

The production of honey has decreased in the Gaza Strip over the past 10 years. According to Ghazal, there are several reasons behind this decline in honey production. These include an increasing urban sprawl over agricultural lands following an increase in population density and the high levels of salinity in the underground water that affects citrus trees, damaging nearly a third of them. In addition, the Ministry of Agriculture has focused on the cultivation of olive trees, which do not require much water, but from which bees cannot gather nectar.

Ghazal said, “My income used to reach $40,000 a year; however, it has now dropped to about $10,000. This is due to a lack of popular and official interest in bee farmers, the low level of honey production and high production costs, following a rise in the price of required supplies. The future is dark.”

Hazem Balousha is a Palestinian journalist based in Gaza City. He has worked as a news producer for BBC World Service, as well as contributed to Deutsche Welle, The Guardian, Al-Raya (Qatar) and other publications. On Twitter: @iHaZeMi