A festival in the West Bank village of Battir celebrates the locally grown eggplant of the village known for its terraced cultivation of vines and olives. 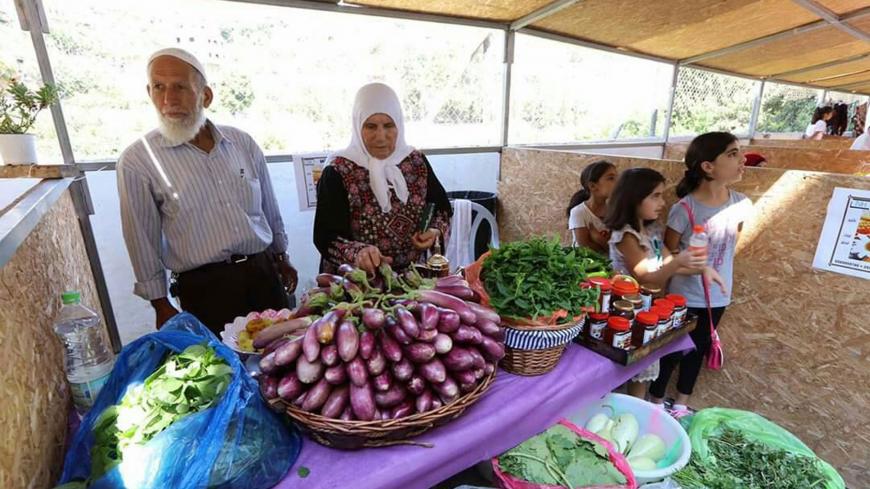 People show off their wares at the Battir Eggplant Festival, West Bank, seen in a picture uploaded Aug. 17, 2019. - Facebook/Salfit24

GAZA CITY, Gaza Strip — Locally grown eggplants have earned a significant place in the Palestinian cuisine, heritage and economy and is celebrated every summer in Battir, a historical village in the West Bank, 6.5 kilometers (4 miles) west of Bethlehem. Light purple, large or small but always fragrant, eggplants make up an essential part of the Palestinian kitchen from makdous, a pickled stuffed eggplant dish, to maqluba, a traditional dish with chicken, rice and eggplant.

The annual Battir Eggplant Festival, which took place on Aug. 17-19, is not just an occasion to celebrate the popular crop; it highlights just how this historical village — known for its 4,000 years of terraced cultivation of vines and olives — has suffered, first by plans of an Israeli separation barrier that could have been built right across the historical terraces, then under the restriction of movement and nearby Israeli settlers.

Battir, located on the Green Line, won the 2011 UNESCO-Greece Melina Mercouri International Prize for the Safeguarding and Management of Cultural Landscapes. The site was recognized for aesthetic and symbolic value, with the jury emphasizing the action undertaken to stabilize the traditional agricultural use of the landscape in collaboration with local farmers and the adoption of protective legislation and a sound management plan.

In June 2014, the village was added to UNESCO's list of World Heritage in Danger. The UN cultural body described the village as “a major Palestinian cultural landscape,” due to its complex and unique irrigation system. “The unique water distribution system used by the families of Battir is a testament to an ancient egalitarian distribution system that delivers water to the terraced agricultural land based on a simple mathematical calculation and a clear time-managed rotation scheme,” UNESCO's statement read.

A year after Battir was inscribed on the danger list, the Israeli High Court ruled against building the part of the barrier that would have run through the center of the village. But the locals fear a resumption of the construction despite the decision, as well as the razing of their lands to make a road for the Israeli settlers. In August 2018, Israel built a road around the village and three others to the west of Bethlehem in order to facilitate the passage of the settlers to the nearby Bitar Aleit settlement, thus triggering the concerns of the Palestinian villagers.

Farmers also complain that the checkpoints prevent them from taking their eggplants and other crops to Jerusalem, let alone to markets beyond. So the annual festival is one of the few means that enable the farmers to sell their crops to buyers who come from Jerusalem and towns in the West Bank.

Hassan al-Butma, head of Battir village council, told Al-Monitor that following the village being inscribed on the World Heritage list the number of tourists has increased, who also buy the eggplants, either fresh or canned, to take back home.

He said that the village council, aware of the interest in the festival, gave farmers 12,000 eggplant seeds that were hybridized for the first time this year, to improve the quality and quantity of the produce.

Hussein al-Qaissi, a Battir villager, told Al-Monitor that he sold 70 kilograms (154 pounds) of eggplants within three hours — which helps him financially as he has been unable to market his products in Jerusalem and Israel since the barrier was built. He noted that the price of 1 kilogram (2.2 pounds) of eggplants ranges from 12 Israeli shekels to 15 shekels ($3.40-$4.20).

But for Qaissi, “the weak support" from the Palestinian Ministry of Agriculture is as inconvenient as the Israeli restrictions. “[We need] the rehabilitation of irrigation channels and [subsidies] for fertilizers that are too expensive for the farmers,” he added.

Hassan Oueini, another local farmer, told Al-Monitor that the festival shifts the attention of the local Palestinian consumer back to the eggplants grown in the Palestinian terrritories, "which is a key part of our gastronomic heritage." He agreed with Qaissi that the Palestinian government needs to do more to help its farmers.

Oueini called on the Palestinian authorities to take tangible steps to help farmers stand their ground against Israeli attacks, specifically the damage to crops caused by Israeli settlers building new settlements. The most recent threat to the agricultural lands took place when dozens of settlers built mobile homes in the village, under the protection of the Israeli army, in December 2018.

“The Palestinian eggplant is among the vegetables tourists buy,” Khalid Abu Hassan, board member of Battir Agricultural Cooperative, told Al-Monitor, explaining that tourists come to see the antiquities and heritage in this UNESCO-inscribed village but leave with eggplants.

Abu Hassan said that the eggplant season constitutes a seasonal opportunity for the unemployed to grow, harvest and sell eggplants.

But the efforts to develop agricultural products is hampered by Israel, Talaat Abu Rajab, professor of economics at the University of Hebron, told Al-Monitor. “Israel’s aim is to impede the development of the Palestinian economy. Palestinian farmers incur huge losses when transporting a product from one place another, because crops are damaged before reaching markets,” he said, pointing out that farmers have to participate in agricultural festivals to reach buyers.