The Palestinian Authority has turned to UNESCO to save an ancient West Bank village threatened by Israel's separation barrier, Lena Odgaard reports. 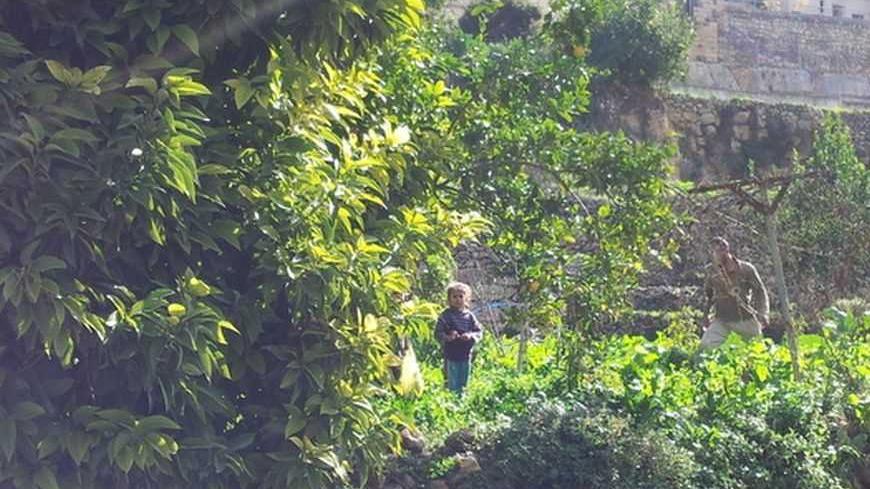 A farmer and his children cultivate their fields, as generations have done for centuries, in Battir, near Bethlehem Dec. 16, 2012. - Lena Odgaard

Battir, a small Palestinian village unique for its ancient stone terraces, springs and irrigation systems, is under threat as Israel plans to expand the separation barrier through the landscape.

The village is located on the so-called Green Line from the armistice agreement after the war in 1948, and over half of the Battiri people’s fields are located on the Israeli side. The villagers argue that the barrier will damage the area and cut them off from their fields and sources of income. Now the Palestinian Authority is preparing an application to UNESCO, hoping to get the area added to its World Heritage list and thereby save the historical landscape.

“Battir was a Roman city. Before that, the Canaanites used to settle here,” said Hassan Muamer from the Battir Eco-Museum, talking to Al-Monitor in Battir, surrounded by lettuce and squash plants and avocado trees.

For centuries the inhabitants of the small village of Battir, located less than five miles from Jerusalem, have tended their fields built on the stone terraces hugging the hillside below the village. Ancient irrigation systems lead fresh water from springs to the lush green hills. And in the village, ruins dating back to before the Roman era bear witness of the long history of Battir.

Pointing to a farmer and his two young children plucking their crops of lettuce and dumping it in a wheelbarrow, Muamer explains that although there are other Roman-era villages in the West Bank, Battir is the only one where the traditional ways of cultivating the land and irrigating the fields are used by the farmers.

Railway tracks running through the valley mark the Green Line, and several times a day Israeli trains go by transporting goods from Jerusalem to Jaffa. A paragraph in the 65-year-old armistice agreement has for decades allowed the villagers free access to their fields on the Israeli side of the tracks, but now Israel argues that to protect the railway and due to the risk of Palestinian suicide bombers to Israeli cities, a barrier of barbed-wired fences, patrol roads and a 1500-foot-long concrete wall must be established.

With the support of the environmental organization Friends of the Earth Middle East, the villagers have filed a petition with the Israeli Supreme Court, arguing that the barrier will destroy the ancient terraces. But Muamer has more faith in recognition and protection from UNESCO. Palestine became a full member of UNESCO in November 2011 and in June last year, the first site, the Church of the Nativity in Bethlehem was added to the organization’s list of areas of extraordinary cultural or natural importance to the common heritage of humanity.

According to Cultural Heritage expert at UNESCO Giovanni Fontana Antonelli, Battir is special due to the degree of integrity of the terraced landscape and the continuity of the use of the land.

“Another thing in Battir is the association of terraces to water springs, where you have the two things combined in a marvelous symbiosis. The water is taken to irrigate the terraces and the cultivation of not only olive trees and almond trees, but also fruits and vegetables. This has existed at least 3,000 years,” Antonelli told Al-Monitor at UNESCO’s office in Ramallah.

In December, the Israeli Supreme Court appeared to listen to the petitions against the barrier after receiving a letter from the Israeli Nature and Parks Authority, which also warned of the negative impact of the barrier to the surrounding environment. According to the Israeli newspaper Haaretz, this was the first time an Israeli state agency has opposed a segment of the separation barrier.

The court gave the military 90 days to suggest a new route for the barrier, but Antonelli maintains the urgency of adding the site to UNESCO’s list due to the immediate threat of the barrier.

Antonelli denies that the UNESCO application is a political tool, citing the organization’s independent status as a representative for a wide range of countries, including Israel.

“It is not a blanket you put on your country; it’s a spotlight,” said Antonelli: “UNESCO is mandated to preserve cultural heritage all over the world. It is not its action to enforce a political agenda. But in certain areas — and this, unfortunately, is one of them — the political factors are strongly influencing our work.”

But in Battir, Muamer still sees the possible UNESCO recognition as a method of peaceful resistance.

“If I want to support my people, my community and their resistance in this land, I want to think how I can develop something on the ground which they can actually benefit from. They have created this agricultural system through thousands of years and now it could be destroyed. I must find a way to stop it — this is the main logic behind [the application],” he said.

Battir’s mayor, Akram Bader, agrees, but also sees a position on the list as a way to significantly improve the opportunities for economic growth in the village.

“Battir will become famous and a lot of donors will come to renovate the area, because it will not only be for Palestinians or Israelis but a World Heritage Site,” Bader told Al-Monitor, looking out on the old terraces. He explained that the past few years, a hiking trail has been established through the Battiri landscape, and other initiatives such as guest houses and souvenir shops are also underway.

The Palestinian Authority is now finishing the application, which must be sent by Feb. 1. If the application is accepted, a vote will take place in June. Meanwhile, the people of Battir fear that this will give Israel enough time to approve an alternate route and begin construction elsewhere in the ancient landscape.