This week, the Israeli Supreme Court will hear a petition against the last portion of the separation fence, planned to cut through a unique ancient terrace landscape. 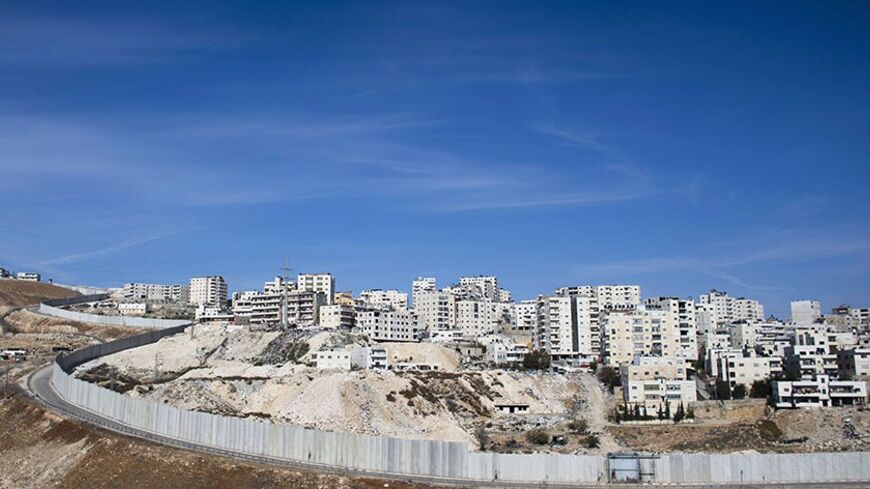 A section of the controversial Israeli barrier runs along the Shuafat refugee camp in the West Bank, as seen from Jerusalem, Jan. 3, 2014. - REUTERS/Ronen Zvulun

Prime Minister Benjamin Netanyahu insists, as reported here, that the Israel Defense Forces (IDF) maintain a presence along the Jordan river for years to come, to protect the newly charted “seam” line against infiltration by terrorists and weapons smuggling.

Netanyahu asks us to believe that this demand does not stem from concern for the interests of the settlers, has nothing to do with economic considerations and is in no way connected to political constraints. His one and only concern is for Israel’s security and, as we know, he does not make concessions on Israel’s security. Right? Not exactly. If this is true, how does one explain the multiple breaches in the separation fence, or as it’s officially named, the “security fence?”

How is it possible that 12 years after the government approved the erection of the fence, the West Bank settlement blocs — Gush Etzion, Ma’ale Adumim and Ariel-Kdumim — are still mostly on the eastern side of the obstacle? If, indeed, as the official site of the Defense Ministry claims, the fence is “designed to reduce the capability of terrorists to infiltrate from the Palestinian Authority into Israel’s area,” how does one explain that about one-third of the planned outline of the fence is still being breached?

If the intention had indeed been only to prevent the infiltration of terrorists into “Israel’s area,” meaning the area west of the Green Line under Israeli sovereignty, the whole fence would already have been up. But the completion of the fence is being delayed by petitions that stem from the government’s insistence on including settlements on the western side of the fence, instead of adhering to the 1967 border.

The planned 815-kilometer (506-mile) course of the fence (including the portion around Jerusalem) is almost three times as long as than the Green Line. It follows, then, that this obstacle is designed to annex territories outside Israel’s sovereign area. It has nothing whatsoever to do with the defense needs of the residents of the State of Israel.

Like the new tenders for construction in the West Bank settlements and in East Jerusalem, the fence is part of a policy of establishing realities on the ground. These facts blur the ’67 lines — the course that was designed to serve as the basis for the permanent border between Israel and the Palestine. This is the line identified by US President Barack Obama as the platform for a permanent arrangement between Israel and Palestine (with agreed-upon land swaps).

While the US State Department is putting the finishing touches on the document of principles that is supposed to breathe life into the Green Line, a crucial hearing will be held Jan. 29 at Israel’s Supreme Court in a case that illustrates how Israel wishes to use the fence to change the situation.

This “defense-related” construction is connected to a riveting political-archeological-environmental issue. The High Court justices will be hearing a petition brought by the Friends of the Earth organization and the residents of the West Bank village of Battir against the erection of the fence in the heart of the largest and oldest terrace area conserved in the Judean mountains. The petitioners claim the fence will damage the traditional irrigation system, which has served the village farmers since the days of the First Temple. This system is considered a unique relic of ancient agriculture. The planned course of the fence is also supposed to separate the residents from their lands, which stretch out over some 3,000 dunams (740 acres).

The petitioners presented an alternative course west of the planned route that would minimize, they claim, the damage to the scenery and to the traditional farming culture. The Ministry of Defense rejected the proposal and emphasized, “The fence near the village of Battir is the last remaining breach in the defense of the residents of Jerusalem.” The Ministry of Defense claims that its course takes into account the need to protect the rail link between Jerusalem and central Israel. But anyone driving along Route 1 between the capital and Tel Aviv can see the energetic work being conducted on a new rail line designed to cut the travel time between the two cities.

Michael Sfard, the lawyer representing Friends of the Earth, noted in the petition that the Ministry of Defense's course threatens “to destroy a uniquely sensitive site which has been in existence for thousands of years, and all in order to serve a rail line that is about to go out of service within a few years.”

During one of the court sessions, the judges recommended that the Ministry of Defense reconsider its position. Before the justices is a surprising submission by the Israel Nature and Parks Authority, which reversed its stance and turned from defendant to petitioner. The authority warns that the fence will damage the ancient landscape, cut the farmers off from their lands and result in the destruction of an ancient culture. This is the first time that a statutory body whose heads are appointed by the government has challenged the defense authorities.

It’s worth noting that the authority is not led by a bunch of left-wingers. The director-general, Shaul Goldstein, served in the past as the head the settlement Gush Etzion's regional council. The head of the authority’s Jerusalem district is Evyatar Cohen, a resident of the settlement of Ofra and also a leading member of the right-wing El’ad organization, which promotes Jewish control over the Holy Basin in East Jerusalem.

Gideon Bromberg, director of Friends of the Earth Middle East, told Al-Monitor this week, “No one argues over the need to protect the citizens of Israel, but the IDF is dragging Israel into the destruction of a world heritage site, when there’s an alternative solution which balances security needs with environmental preservation needs.” Bromberg has a hard time understanding the insistence of the Ministry of Defense on a course that will cause irreversible damage to a unique 4,000-year-old cultural heritage site that has been preserved in just one area of the Middle East.

It’s unclear how the ministry’s stance can be reconciled with the statement appearing on the website of the “seam zone” directorate, according to which the principles of charting the fence include “consideration for the texture of the population’s life, the affinities of the Palestinian and Israeli populations … [and] the preservation of landscape and nature.”

In a detailed response presented to the court, the head of the IDF’s Central Command, Gen. Nitzan Alon, refused to recognize the existence of security alternatives to the course charted by the military or to explain why he rules them out. Perhaps the IDF is gambling on the Supreme Court’s penchant for giving in to the sacred cow of “defense needs.”

If the judges do not depart from their habits and approve the current course of the fence, the Palestinian Authority is expected to ask UNESCO to declare the ancient terraces a World Heritage Site under the organization’s control and under the supervision of UN's new member, Palestine, much to Israel’s chagrin.

The case of Battir might sound the opening gong for a boxing match between Israel and the Palestinians on the day following the rejection of the security arrangements in the US document of principles. In this arena — the arena of international organizations — no one stands at attention upon hearing the words “Israel’s defense needs.”