Following the wave of violence in March and April, Israeli security authorities are working on the unfinished security wall in the north of the West Bank. 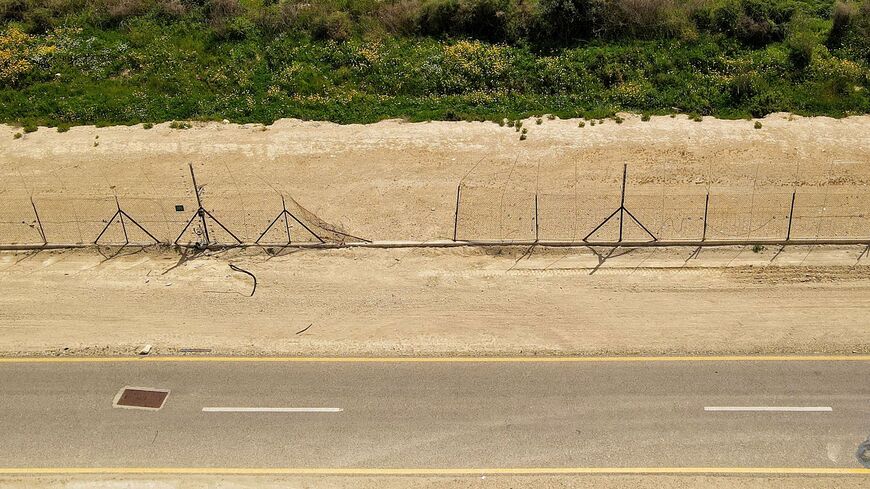 This picture taken on April 13, 2022, shows a view of a hole in the security fence in central Israel separating it from the occupied West Bank. - JACK GUEZ/AFP via Getty Images

The Ministry of Defense has begun construction of a wall along the line separating Israel from the West Bank near the Palestinian town of Jenin, and security officials fear an escalation of Palestinian violence as work on the barrier progresses. The barrier along what is commonly called the "seam line" aims to prevent Palestinians from illegally entering Israel and ward off terrorist attacks against Israelis such as those in March and April of this year.

The wall is intended to plug the numerous breaches along the existing fence that have allowed Palestinians to cross into Israel for years unhindered. The seam line, which more or less follows the 1967 Green Line demarcation, stretches about 700 kilometers (434 miles).

Israel started constructing this barrier 20 years ago. During the second intifada (2000-2005), when there were numerous attacks in the heart of Israel, the government decided to build a fence to prevent assailants from crossing into the country. Though many years have passed since the decision, the cement barrier covers only 134 kilometers (83 miles). The rest is blocked off by a wire fence that is rather easy to breach. Along two major sections — near the Gush Etzion settlements south of Jerusalem and from the Hebron Hills area to the Dead Sea — there is no barrier at all.

Israel also failed to plug the many breaches along the fence, cut in dozens of spots by Palestinian laborers seeking entry to Israel for work to support their families in the West Bank.

A combination of Israeli neglect and a tacit decision to turn a blind eye to allow Palestinians to make a living allows no fewer than 40,000 people to enter Israel illegally most days. Assailants have taken advantage of these gaps to conduct attacks on Israelis, prompting public outrage and promises by authorities to plug the holes.

Following the deadly terror wave in March and April 2022, Israeli authorities decided to invest considerable resources to reduce the infiltrators. The immediate solution was to reinforce the military forces deployed in the West Bank. The Ministry of Defense also began plugging gaps in the fence and digging trenches along its route to prevent the passage of vehicles into the Israeli heartland.

These actions have reduced the number of daily infiltrators into Israel to a few dozen.

For the longer term, Defense Minister Benny Gantz has allocated 300 million shekels ($93 million) for the construction of a wall along the seam line, a patently insufficient budget. Construction along the entire path has been estimated to cost 2.5 billion shekels ($740 million). However, Israel's defense authorities opted to invest most of the resources into completing construction of the perimeter fence along the country’s northern border with Lebanon, an area threatened by Hezbollah's Radwan forces.

Construction has also started of a security barrier to replace the porous fence built 20 years ago. It includes a massive wall up to nine meters (29 feet) in height, sensors and surveillance cameras along 45 kilometers (28 miles). According to the Ministry of Defense, the barrier will begin in the Salem area of northern Samaria and end near the Israeli moshav of Bat Hefer in Israel’s northern Sharon region. Construction is expected to take one year.

Jenin is a prominent hub of anti-Israel violence. Israeli military forces raid the area regularly, as they did this past week, to capture suspected terrorists, with frequent heavy exchanges of fire and violent disturbances. The Jenin area is also a focal point for the smuggling of weapons, stolen cars and equipment as well as drugs.

Construction of the wall was suspended ahead of US President Joe Biden’s mid-July visit to Israel in order to avoid Palestinian unrest. Security sources claimed the work halt was also due to the holidays of Muslim contract workers. Work has since resumed.

The authorities are concerned the construction will generate friction between Israeli security forces and Palestinians, including those who will be prevented from entering Israel through breaches in the fence to work, as they have been doing for years, and those whose smuggling routes will be shut down.

Still, Israeli security officials insist the project must be completed as soon as possible and are making plans to open two official crossings along the border to allow the passage of Palestinians bearing work permits.

On Aug. 2, Gantz visited the military’s Central Command and the West Bank border area to monitor the progress. He said there, "We are also making progress in the work on the seam barrier and are constantly adjusting the operational concept in order to protect the civilian home front and also to expand the economic circles between us and the Palestinians out of a common interest of prosperity and stability."