With so few Palestinians offered working permits in Israel, the government prefers looking the other way on those who slip through the separation fence and enter clandestinely into the country. 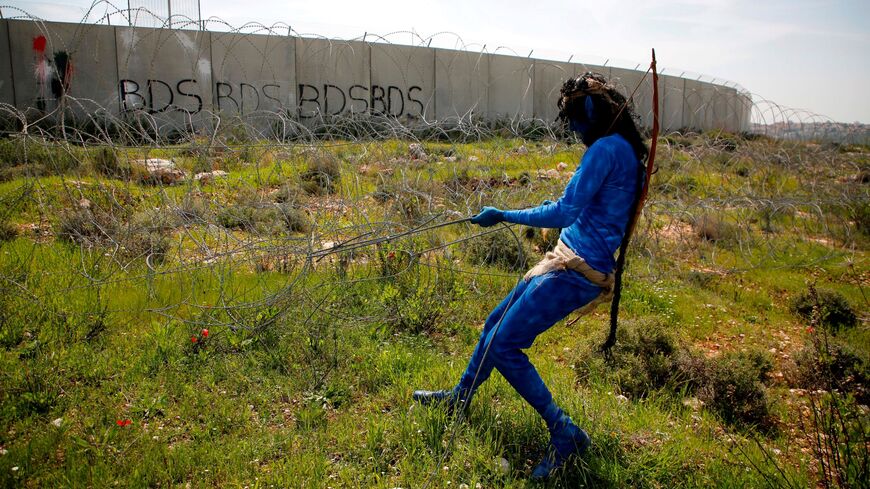 A demonstrator pulls a barbed wire fence before Israel's controversial separation barrier by the occupied West Bank village of Bilin near Ramallah on March 2, 2018 during a protest against the barrier. - ABBAS MOMANI/AFP via Getty Images

The wave of terrorist attacks in Israel over the past two weeks has brought the failures of the West Bank separation fence back into public debate. The Palestinian assailant who killed five people March 29 in Bnei Brak drove into Israel through an unmonitored agricultural gate in the fence, bringing with him an automatic weapon which he used in his attack.

The construction of the separation fence began in the summer of 2002, when the Sharon government authorized a barrier between the West Bank and Israeli territory at the height of the Second Intifada. In a few months, tens of kilometers of the barrier were built. The wall was supposed to extend close to 700 kilometers, but construction was never completed.

The main reason the project stalled was budgetary, but there were other factors. Center/left-wing circles, as well as many in the Israeli security establishment, believe that the illegal Palestinian workers who commute to Israel help the Palestinian economy, which decreases the motivation for terrorism. Therefore, some security officials say that preventing Palestinians who wish to work in Israel from entering could cause unrest.

This situation is comfortable for the Israeli right wing as well, which fears that finishing the separation fence would establish facts on the ground for giving up territory.

As a result, for many years Israel has tolerated the status quo. According to estimates, 40,000 people cross the fence illegally every day. Workers are met with cars, work for employers who are known to the security establishment, and reside at permanent residences.

The vast majority of illegal workers have nothing to do with terrorism and only wish to make a dignified living for their families. Still, in the same way that they enter Israel, terrorists and hostile persons could also enter. The security establishment has long recommended addressing this problem by increasing the number of work permits given to Palestinians and completing the  separation fence.

Security officials admit that control over every possible gap in a barrier hundreds of kilometers long is an enormous technical and operational challenge, maybe even impossible. However, in light of the wave of terror, the IDF has spread hundreds of soldiers along the barrier to try to deal with the daily flow of illegal workers. But this temporary boost cannot solve the root of the problem.

Defense Minister Benny Gantz recently directed the security establishment to plan for construction at central points in the barrier. The first plan was presented to him at the beginning of the week, but because of its high cost, Gantz sent his officials to make additional checks.

Still, even if the lower figure is accurate, the IDF cannot spare one billion shekels, especially as the Finance Ministry does not intend to add even one shekel to the defense budget. More than that, Gantz believes that the threat from the Lebanese border is more serious, and thus prefers to create a powerful barrier between Israel and Lebanon.

The minister’s position is logical, since the fence that currently separates Israel and Lebanon is antiquated, built in the 1970s, and is easy to cross. And Hezbollah General Secretary Hasan Nasrallah has said that in a conflict, his forces would enter Israeli territory with the goal of “conquering the Galilee.”

Therefore, in recent years the security establishment has pushed for a stronger border fence in the north, but only last year was a first budget authorized. In 2022, 600 million NIS [$185 million] was budgeted for the northern fence, and 250 million additional NIS [$77 million] will be allocated for security shelters for villages adjacent to the border. In reality, billions more are needed that have not yet been authorized.

Taking all of the above into account, Gantz’s associates now estimate that in the end, the minister will allocate a few million NIS for closing up just the most critical gaps in the West Bank fence.