Worried that the three attacks might only be the beginning, Israeli security agencies deploy multiple efforts to restore calm during the upcoming Ramadan and Passover period. 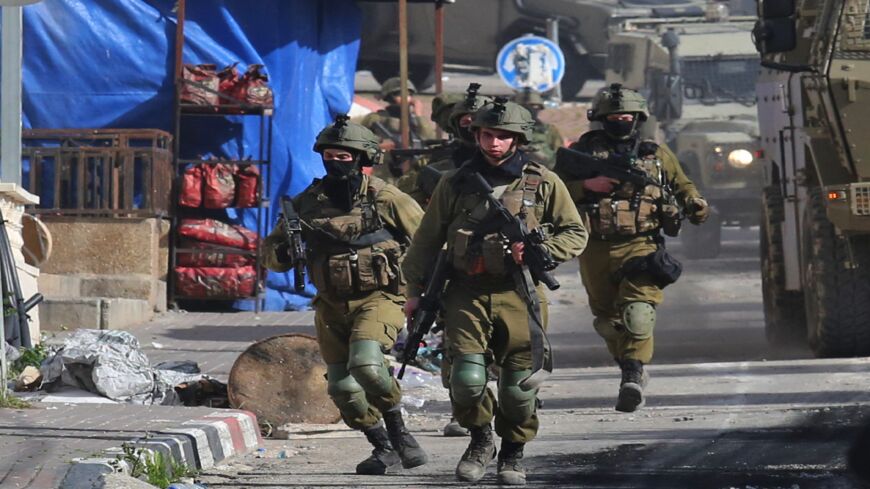 Israeli soldiers patrol on March 30, 2022, in a village south of Jenin in the occupied West Bank, reportedly from where Palestinian assailant Diaa Hamarshah left before killing five people during a gun attack in Israel. - AFP via Getty Images

The March 29 shooting spree in the suburban Tel Aviv town of Bnei Brak was the clincher. There is no longer any doubt that Israel is in the throes of a wave of terrorism, as articulated by Prime Minister Naftali Bennett, the deadliest it has experienced in seven years. Within one week, 11 people (nine Israelis and two foreign nationals) were murdered on the streets of three Israeli towns: Beersheba, Hadera and Bnei Brak.

Unlike the attacks in Beersheba March 22 and Hadera March 27 carried out by Israeli Arab citizens affiliated with the Islamic State organization, the Bnei Brak shooter was a Palestinian from the northern West Bank village of Yabd. Perhaps inspired by the two previous assaults, he is believed to have entered Israel through one of the many breaches in the security fence with the West Bank. He seems to have chosen Bnei Brak because he was familiar with the area, having worked there illegally on a construction site.

Israeli security agencies are looking now into the failure of anticipating and preventing these attacks. Some security experts pointed out that the Shin Bet is bound by legal restrictions on monitoring Israeli citizens, such as the two Arabs who carried out the Beersheba and Hadera attacks. On the other hand, they argue that the Shin Bet has no such excuse for not preventing the Bnei Brak attack. Palestinians enjoy fewer legal rights than Israeli citizens, and the assailant was known to authorities and had spent time in an Israeli jail for security offenses.

Immediately after the Bnei Brak attack, army Chief Lt. Gen. Aviv Kochavi ordered the deployment of four additional battalions in the West Bank to beef up the four already deployed there in recent days. On March 30, he sent in an additional four battalions, bringing the total of additional forces to an unprecedented 12. Several hours after the Bnei Brak killings, Israeli security forces were already conducting a raid on the assailant’s village, detaining suspected collaborators and mapping out his family home ahead of its punitive destruction.

Reportedly, the Israeli Police are now asking the government to pay for the recruitment of another 4,000 officers to face a possible terror wave. Evidently, even if the government agrees, this will take time. In the meantime, Defense Minister Benny Gantz ordered today 1,000 Israel Defense Forces (IDF) soldiers to bolster the police. Combat soldiers still in training will be deployed to the borders of the West Bank and within Israeli cities.

Security officials are concerned that the three “successful” attacks will spawn copycat killings. Their concern is compounded by two upcoming religious observances — the Muslim month of Ramadan and the weeklong Jewish Passover holiday — as well as sensitive anniversaries such as the March 30 Land Day protesting Israeli land expropriations.

The latest attacks are undoubtedly the toughest test of the government led by Prime Minister Naftali Bennett. But apart from the political test, it is also a test for the IDF and for Israel’s other security agencies. They will be tested on gathering intelligence, monitoring social networks, and identifying and locating potential assailants.

One of the most sensitive issues (both politically and security-wise) to have surfaced after the Bnei Brak attack is that of the thousands of Palestinians (40,000 according to estimates) crossing daily into Israel illegally to seek work. Many of them spend nights at construction sites and other venues where they are employed. While the vast majority of these illegal workers are only interested in making a living, all it takes is one to wreak the kind of havoc we saw in Bnei Brak.

Many in the security system believe the solution to the problem lies in increasing the labor permit quota and at the same time plugging up the holes in the fence and increasing surveillance along the barrier. The police announced on March 30 that it was launching an operation to locate West Bank and Gaza Palestinians employed illegally within Israel. Defense Minister Benny Gantz has in recent months increased the number of work permits to Palestinians. Evidently, he estimates better living conditions in the West Bank and Gaza are the best remedy for lowering tensions and limiting violent outbursts.

In the diplomatic arena, Israel launched even before the attacks a series of unprecedented efforts to prevent an escalation of Palestinian violence, as reflected in the visit last week of Public Security Minister Omer Bar Lev in Jordan, in Gantz’s March 29 meeting with Jordan’s King Abdullah in Amman, and in the historic visit to Jordan today by President Isaac Herzog, apparently scheduled before the attacks.

While Israel deploys these diplomatic efforts, mostly vis-a-vis Amman, there is also the Gaza arena to consider. While messages conveyed to Israel through Egypt and by a Qatari envoy indicate that Hamas is not seeking an escalation, experience has taught us that events in Gaza can veer out of control within minutes.