With a fourth deadly attack in less than three weeks, Prime Minister Naftali Bennett has much more to cope with than just the current coalition crisis. 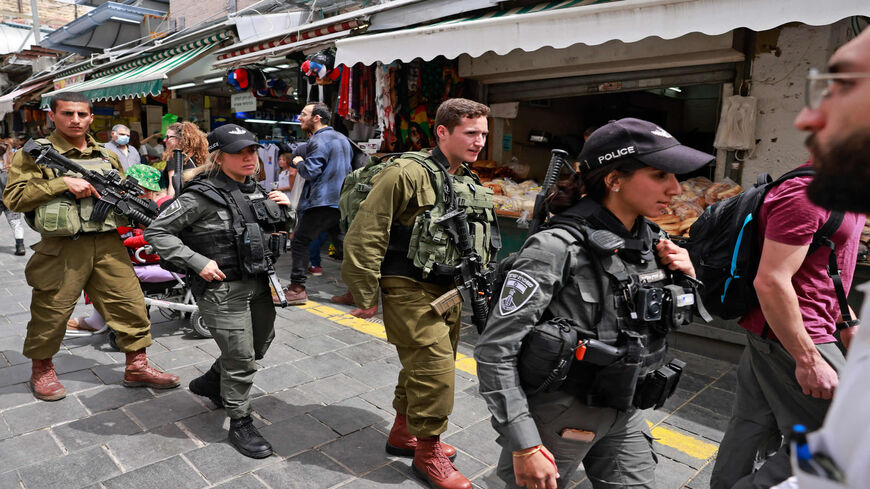 Prime Minister Naftali Bennett has been put through the wringer this past week.

First came intense efforts to stem the massive political bleeding of his Yamina party and governing coalition following the stunning resignation of coalition whip Knesset member Idit Silman. Silman announced that she was quitting the coalition, to join the opposition, robbing Bennett of his fragile Knesset majority. Three days of frantic negotiations to appease and/or threaten other would-be defections to the opposition staunched the political bleeding, at least for now. For the moment, no other Yamina member has announced his/her defection.

But by the end of the week, Bennett was facing a different kind of nightmare, when a Palestinian from the West Bank opened fire in the evening hours of April 7 at a pub on one of Tel Aviv’s main commercial and nightlife drags, shooting dead two young men, Eytam Magini and Tomer Morad, friends aged 27 out for a night on the town. Several others were injured, four of them very seriously. As he fled the scene, the terrorist shot at a dog walker, missed and disappeared into the night.

Tel Aviv’s bustling streets emptied of partygoers and filled with security forces of every kind — police, army commandos, Shin Bet security agents, and more. The tense, dramatic manhunt launched for the shooter was aired live on television channels, riveting Israelis to their screens as they adhered to police instructions to stay inside and lock their doors. In the pre-dawn hours of April 8, special forces located the terrorist hiding by a mosque in the nearby Jaffa neighborhood. According to police, a gunfight ensued and he was shot dead.

Bennett is under two unbearable burdens. The loss of his coalition Knesset majority calls into question the government’s prospects of survival, which are further undermined by a spate of four successive terrorist attacks in Israeli urban centers that has killed 13 people since March 22. The Tel Aviv attack came just hours before the first Friday of the holy Muslim month of Ramadan, a highly explosive period on Israel’s calendar, which got off to an early deadly start this year even before it officially began on April 2.

In a bid to defuse tensions and prevent a repeat of last year’s Ramadan violence, Bennett and Defense Minister Benny Gantz had decided earlier this week to ease restrictions on Muslim prayer at Jerusalem’s Al Aqsa Mosque and allow Palestinian laborers with permits to cross from the West Bank into Israel, avoiding the closure usually imposed on the West Bank throughout this period.

This was how Israel dealt with a previous wave of terror attacks in 2015-16, in which 50 Israelis were killed, making a point of differentiating between potential terrorists and the general Palestinian population. It worked at the time, bringing the attacks to an end. But the current terror attack is different. The terrorists in the 2015-16 attacks mostly used knives. In three of the four recent attacks, guns and rifles were the weapons of choice. Bennett, under incredible political and public pressure, must now decide whether to reverse his previous decision and close off the West Bank for the entire holy Muslim month. Either decision could result in additional terrorism. Hard to believe there are so many takers for the prime minister’s job.

Bennett is not the only one under extreme pressure and harsh criticism. Israel’s vaunted Shin Bet domestic security agency has come under intense scrutiny and censure for failing to foil the attacks, first in Beersheba (March 22), then in the towns of Hadera (March 27), Bnei Brak (March 29) and Tel Aviv. The first two attacks were perpetrated by Israeli Arabs previously known to identify ideologically with the Islamic State. The two subsequent attacks were the work of West Bank Palestinians. In the Bnei Brak incident, the assailant had apparently no known organizational connections. The perpetrator of the Tel Aviv shootings was 28-year-old Ra’ad Fathi Hazem. His profile is now being investigated, and it is not clear yet if he was affiliated with any terror group. Like some 40,000 Palestinians who work in Israel without permits, crossing through breaks in the security fence that authorities generally overlook, Hazem did not have a work permit.

The Shin Bet reportedly foils dozens if not hundreds of terrorist attacks every year. But the absence of organizational affiliation or instructions presents a particular challenge, even for an agency with such a record and reputation for omnipotence. It faced a similar problem in the 2015-16 terror spree, also conducted by and large by lone individuals with no known connections to an organizational infrastructure. The agency quickly adapted to the changed circumstances, developing cyber tools to intensively monitor social media in order to identify potential assailants before they take up a knife or gun and set out on a killing mission.

Professor Boaz Ganor, a world-renowned counterterrorism expert, said on Al-Monitor’s “On Israel” podcast this week that most such attackers leave an imprint on social media, usually a prepared video clip, in order to distinguish themselves from run-of-the-mill criminals and create a legacy of heroism and martyrdom for themselves. But not everyone does. Is there any possible way to delve into the mind of a mission-targeted terrorist intent on killing Jewish Israelis who maintains complete cyber silence before setting out?

The crippled government led by Bennett and Alternate Prime Minister and Foreign Minister Yair Lapid is facing several complex decisions. The first, as mentioned, is whether to prevent, until the end of April, the entry of tens of thousands of West Bank Palestinians dependent for their living on work in Israel and not linked in any way to terrorism. This consideration is compounded by two upcoming calendar dates — the weeklong Passover observance starting April 15, and Easter two days later. The government will also have to decide whether to launch an extensive counterterrorism campaign in the Jenin refugee camp, from where the two most recent terrorists hail and which is a hotbed of anti-Israel activity.

Israeli security forces also face tough decisions. The Shin Bet’s legendary reputation and unparalleled experience draws senior counterterrorism officials from Europe, the United States and other countries, including Sunni Muslim states, seeking to study its methods and bask in its glory. Israel has put a stop to far worse waves of terrorism over the years, creating interception capabilities to stop rockets in mid-flight, multilayered air defense systems and perhaps the world’s most comprehensive detailed intelligence database on Iran’s nuclear ambitions and state-sponsored terrorism.

None of this provides Israel, so it seems, with the tools to know in advance that a 28-year-old Palestinian will decide one day to obtain a gun, cross illegally into Israel and kill Jews in the heart of Tel Aviv. Security agencies will now have to devise ways to confront this type of threat, too.