Israeli settlers and right-wing political parties fear that the West Bank security fence will serve as a proposed border line in future negotiations with the Palestinians. 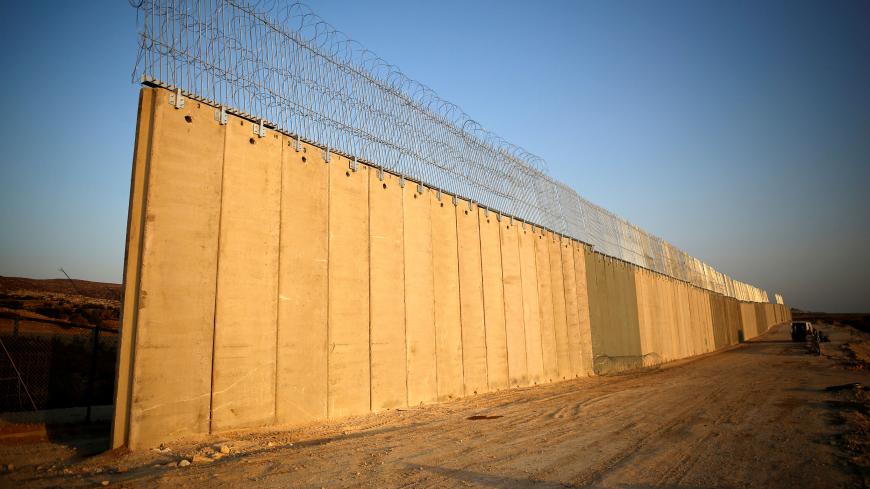 An Israeli barrier with the West Bank is seen while still under construction near Havat Ela, southern Israel, July 20, 2016. - REUTERS/Amir Cohen

On June 6, the Knesset voted down for the third time a proposed bill by opposition lawmaker Omer Barlev of the Zionist Camp mandating completion of the barrier between Israel and the West Bank, which he views as vital for terrorism prevention. Opposition to the bill was led by the three main coalition parties: Likud, HaBayit HaYehudi and Yisrael Beitenu.

In explaining the bill he authored, Barlev said it was designed to force the government and the Defense Ministry to complete construction of the barrier within 18 months as a “national priority.” Although the bill specifically states that the sections of the barrier that would be built along some 100 kilometers (62 miles), as well as those already built, would only serve as a counterterrorism measure and “are not an expression of a different diplomatic border line,” the political right is convinced the bill has diplomatic and political significance. In other words, the right is concerned that an Israeli initiative of putting up a fence that separates West Bank settlements from Palestinian villages around them would constitute an official endorsement of a future border between Israel and a Palestinian state.

Israel started building the barrier in June 2002, at the height of the second intifada (2000-2005) in which hundreds of Israelis were killed in Palestinian terror attacks. Until then, the absence of a fence between sovereign Israel and the area it conquered in the 1967 war allowed terrorists to reach the heart of Israeli towns and villages in a matter of minutes or hours.

Then-Prime Minister Ariel Sharon and some of his ministers objected to the proposed barrier for a long time. However, they were forced to give in to public pressure that grew with every deadly terror attack, and massive budgets were allocated for the project. Within a few years, several hundred kilometers of a “smart” security barrier went up, and in some parts, including the neighborhoods of East Jerusalem, a high cement wall was erected to protect against sniper fire.

The waning of the second intifada was attributed in large measure to construction of the barrier, which resulted in a significant decline of terror attacks within Israel. Nonetheless, despite the barrier’s successful results, opposition by Jewish settlers has prevented completion of the project in some sections. The settlers argue that completion of the barrier promotes the left wing’s “separation idea” to create a permanent border with the West Bank.

The settlers are not the barrier’s only opponents. Palestinian residents of the West Bank and environmental groups are also opposed for different reasons, and a number of petitions have been submitted against the project to the Supreme Court over the years. The Palestinians argue that the proposed route of the barrier annexes some of their lands to Israel, while green groups claim the construction causes grave environmental damage. The tangled array of interests and political pressure has prevented the completion of the barrier up to now.

Prime Minister Benjamin Netanyahu is a fervent proponent of separation barriers along Israel’s borders, but he also understands the political and diplomatic sensitivity of erecting them in central areas of the West Bank where most of the settlements are located.

In 2013, for example, on a tour of the Etzion settlement bloc south of Jerusalem, settlement leaders expressed to the prime minister vehement objections, arguing that completion of the barrier in their area would also separate some settlements from each other and erode the fabric of community life. Their efforts and pressure, also brought to bear by the rightist HaBayit HaYehudi party in the government, bore fruit.

In August 2017, Netanyahu and members of the defense Cabinet toured the Etzion bloc to examine the planned barrier area, but the blueprints readied by the Defense Ministry have since lain dormant.

Barlev, a reserve colonel and former commander of the elite Sayeret Matkal commando unit, has been trying in recent years to force the government to complete the barrier. He argues that while the country’s security experts are in no doubt about its necessity to avert terrorism, the government is dragging its feet for political reasons. He is referring to the powerful pro-settlement lobby, which fears that the barrier would determine the future border if an agreement is reached with the Palestinians granting them a state, whereas the settlers are seeking an annexation of their communities to Israel.

On June 7, after the Knesset rejected Barlev’s proposed bill, members of his Labor Party faction in the Zionist Camp toured areas in the West Bank where the barrier has yet to be built. Their intent was to mobilize public opinion and media pressure against what they dubbed “a severe security failure” on the part of the government.

A video clip posted on Twitter by Labor Party leader Avi Gabbay shows Barlev against the backdrop of the settlement town of Maale Adumim, population 37,000 as of 2016. The only reason there is no fence protecting the town, Barlev insists, "is political." Barlev further argues that some one-third of the terrorists who carried out attacks within Israel in recent years exploited the absence of a barrier, making its necessity as a counterterror measure abundantly clear — an opinion with which military and Shin Bet security agency professionals concur.

During the tour, Gabbay blamed the Netanyahu government and Defense Minister Avigdor Liberman for torpedoing the bill. Using a map, he pointed to three main exposed areas along the route of the barrier, which he called “ticking time bombs” — around Maale Adumim, the Etzion settlement bloc and the southern Hebron Hills.

To underscore the extent of the danger, Gabbay explained that the absence of a fence in the Etzion bloc enabled terrorists to kidnap and murder three Israeli youths there in 2014, whereas lack of a barrier in the southern Hebron Hills allowed terrorists to enter Israel and carry out a deadly attack in Tel Aviv’s Sarona market in 2016. Like Barlev, Gabbay also argues that political pressure from the right is the main cause of government inaction on the barrier. "These [political] considerations by [HaBayit HaYehudi Chair Naftali] Bennett and Liberman and Netanyahu are at the expense of our security,” Gabbay stated.

Particularly absurd is the fact that the settlement residents are always the first to complain that authorities do not care about their security, demanding additional budgets and security measures after each terror attack in their communities. At the same time, they are preventing the erection of a barrier, which as all security experts agree would upgrade the level of their security.