Is Israel doomed to live with terror?

Former Mossad Deputy Chief Ram Ben Barak disagrees with Prime Minister Benjamin Netanyahu's position that Israel is doomed to live with terror, claiming that it is up to Israel to decide if it wants to pay the price of occupation. 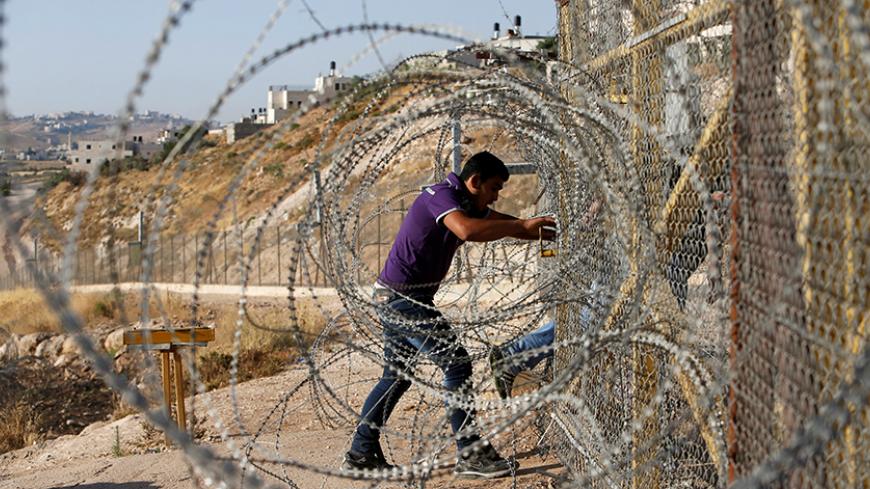 Palestinians pass through an opening in the Israeli barrier fence as they attempt to make their way to attend the third Friday prayer of the holy fasting month of Ramadan in Jerusalem's Al-Aqsa Mosque, near the West Bank city of Bethlehem, June 24, 2016. - REUTERS/Mussa Qawasma

In the course of the second intifada, Yaakov Gilad and Yehuda Poliker wrote a sad hymn on the daily life of the Israelis who experienced the terror of suicide bombers. The words of the song, “What My Love Is Called,” pulled at the heartstrings of anyone who feared being the victim of the next attack. “Who is next in line, and who is standing in the next line?” sang Poliker about the gloomy and bloody reality that continued for about five years.

A decade and a half has passed since the beginning of the second intifada. It appears that the current uprising — the "individual" or "knife intifada" are only some of the various names given to the recent terror wave — have brought this sense of personal vulnerability to Israelis. And every time the wave seems to be dying down, along comes another series of attacks that proves it is not a passing phase.

On July 1, Rabbi Michael Mark was murdered in a drive-by shooting. One day earlier, Hallel Yaffa Ariel, 13, was killed in her sleep at her home in the Kiryat Arba settlement. About three weeks earlier, two residents of Yatta, near Hebron, killed four Israelis while they dined at the Sarona shopping and entertainment complex in Tel Aviv.

In addition to these attacks, recent weeks have seen many other attacks in various places in the country — for example, in the city of Netanya, in the southern Hebron Hills, Ariel and the Etzion settlement bloc.

Terror attacks in the settlements of Judea and Samaria, where about half a million settlers live in close proximity to Palestinian villages and cities, have become routine. While attacks in the cities in the heart of Israel require complicated preparations and effort, attacks in Judea and Samaria are easier to carry out. For example, Muhammad Tarayra from the village of Bani Naim only had to walk a few minutes to reach Kiryat Arba, where he murdered Hallel. In contrast, cousins Khaled and Mahmoud Mahamrah, who perpetrated the attack in the Sarona Market, traveled a long way from Yatta to the Segev Shalom locality in the Negev, where they hid, then went by bus to the city of Beersheba, where they continued on another bus to Tel Aviv.

In the course of the second intifada, when Israel counted hundreds of dead and thousands of wounded in suicide attacks, Prime Minister Ariel Sharon issued an order to erect a separation fence that would constitute a physical barrier against attackers who were able to easily descend from the top of the Hebron hills to cross the Green Line.

The planned separation fence was supposed to be 790 kilometers (491 miles) long. It was intended to do the impossible: separate Israelis and Palestinians while not disrupting the territorial continuity of the settlements with the Green Line localities. The winding route that was designed to keep the settlements outside the separation fence turned the construction into a never-ending saga. About 14 years have elapsed since work began, and the goal of constructing an impregnable physical barrier has not yet been reached.

As of now, only about two-thirds of the fence has been built. It is precisely in the southern Hebron Hills area — through which the Sarona attackers infiltrated — that remains fenceless. Hundreds of Palestinians looking for work pass easily through this very place every day, without any kind of authorization.

The positions of the settlements scattered in the southern Hebron Hills area and the region's complex topography are delaying the completion of the fence and rendering the whole national security enterprise insignificant. Once there is one large breach in the gate, the 500 kilometers (311 miles) of fence that have already been erected are of no use at all.

In recent months, the security system has been trying to find effective measures against the terror wave being carried out by young Palestinians. Almost none of the perpetrators have been affiliated with a terror organization of any kind. But deterrence is no simple matter. In light of the nature of the intifada, every Palestinian from age 13 to 30 is seen as a potential attacker.

The following deterrence methods have been tried to date: destroying the homes of attackers, revoking transit and work permits from members of the terrorist’s extended family, erecting checkpoints in potential hot spots (mainly in the Hebron Hills zone, from which about two-thirds of the attackers have come), creating cyberwarfare units and arresting those who incite to hatred or violence on the internet. These measures have not succeeded in stopping the terror wave. Even Israel’s tight cooperation with the Palestinian security apparatus, which according to security sources on both sides has imposed a certain measure of calm, has not wiped out the intifada. Meanwhile, the attack methods have improved. Until recently, attacks were mostly committed by individuals, but now the attackers work in pairs, knives are replaced by firearms and the motivations for continuing attacks seem not to have decreased.

Since the onset of the terror wave, a substantive debate has raged in Israel between the military and diplomatic echelons. It concerns not only the way the Israel Defense Forces ought to fight terror, but also the essence of and reasons for the violence. Prime Minister Benjamin Netanyahu’s right-wing government links the Palestinian attacks to the jihadi terror wave afflicting the free world.

According to Netanyahu, the Israelis live in a jungle of predatory animals and are condemned to live by the sword. When Culture Minister Miri Regev spoke July 7 at the opening ceremony of the Jerusalem Film Festival, she, too, strengthened the “This is our fate” approach. According to Regev, the murder of Hallel Yaffa Ariel is part of the global terrorism problem, just like the June 12 Florida nightclub massacre and the July 5 attack against Turkey's Ataturk Airport. She was answered with boos by the audience.

By contrast, former Mossad Deputy Chief Ram Ben Barak presented a different equation to the Israelis. In a July 1 interview with Channel 10, Ben Barak said, “We have to honestly say that that is the price we are paying for sitting within a hostile Arab population. We can decide that this is a price we are willing to pay, or we can decide that we don’t want to pay it.” In other words, living with terror is not a decree from heaven.