The Israeli security apparatus believes that despite a recent rise in terror attacks in the West Bank, most Palestinians prefer to keep the calm. 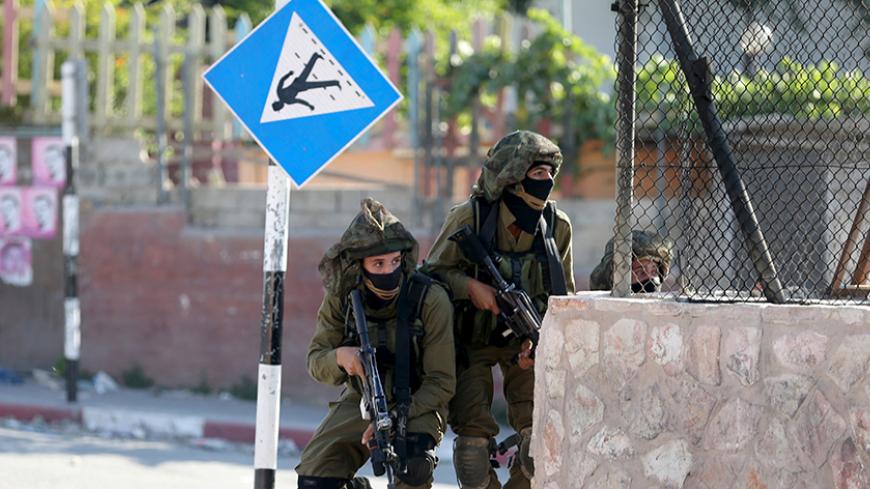 Israeli soldiers take up a position during clashes with Palestinians following a protest against Jewish settlements, in Jalazone refugee camp, near the West Bank city of Ramallah, June 12, 2015. - REUTERS/Mohamad Torokman

On June 29, close to 11 p.m., an unidentified vehicle opened fire on an Israeli car traveling on Alon Road close to the Shiloh settlement in the West Bank. The four friends in the Israeli car were wounded by the long string of gunshots fired from a passing vehicle that disappeared quickly into the night. The next day, Malachi Rosenfeld, 25, died of his injuries. The friends were returning from a basketball game, held under the aegis of the regional Israeli Samaria basketball league, in Eli settlement. Rosenfeld’s brother Yitzhaki, an Israeli air force pilot, had been killed 13 years earlier in a large flash flood near the Tze'elim River.

This was the sixth attack in 10 days on Alon Road. Yet Israeli security services continue to declare resolutely that “this is not an intifada.”

On July 2, Palestinians will mark a year since the death of Arab youth Mohammed Abu Khdeir, who was murdered by three Israelis in retaliation for the abduction and murder of three Israeli youths in the Etzion settlement on June 12, 2014. The event of the murder of the Palestinian youth, who was set on fire by his killers, sent shock waves through the territories a year ago and triggered a large wave of riots, mainly in East Jerusalem. Less than a week later, Operation Protective Edge broke out in the Gaza Strip. Israel’s security establishment is gearing up to deal with the anniversary of the murder, but they continue to emphasize that there is no "intifada energy" in the territories. They publicly say that what is happening is a succession of terror attacks, the likes of which we have seen in the past. These are "public mood-dependent terror attacks" — more spontaneous in nature and connected to Ramadan. The Israel Defense Forces' operational challenge, they say, is to get its hands on the perpetrators, nip the situation in the bud and find the right combination to minimize negative effects during Ramadan, while making life more difficult for those trying to exploit the month of fasting for terror attacks.

“Look around you,” a high-level Israel security source told me on condition of anonymity last week. “Tell me, who in the region has a Ramadan table as abundant and relaxed as those of the Palestinians in Judea and Samaria. Syria? The Ramadan there is bloody, millions of refugees, hundreds of thousands of casualties, a destroyed economy and entire regions on the cusp of famine. Lebanon? A blood bath is taking place there as well and there is deep worry over Hezbollah’s fate and the trickling of Syrian atrocities into Lebanon. In the Sinai Peninsula? There’s war in Sinai. Jordan? They are shaking with fear over the threats surrounding them; the Islamic State [IS] is almost on their doorstep. Besides, the standard of living of most Jordanians is lower than the standard of living of the Palestinians here, and lower by dozens of percentages than the standard of living of Israeli Arabs. So why do they need an intifada?”

An excellent question. Yoram Cohen, head of the Israeli Shin Bet, held a briefing June 30 before the Knesset’s Foreign Affairs and Defense Committee. He presented data and said that from 2012 onward, there has been a yearly increase of 50% in what he calls "folk terror" and "lone wolf attacks." In 2012, there were 683 such attacks, in contrast to 1,834 terror attacks in 2014. In 2014, the Shin Bet thwarted 130 military terror cells, most of them of Hamas, while in 2015 it has already foiled 60 such cells. According to Cohen, "institutionalized terror" is hard put to carry out attacks in light of Israel’s counterterror tactics. Instead, this paves the way for improvised terror, or spontaneous lone wolf attacks.

On the other hand, it is suspected that a more organized terror cell carried out several of the recent attacks. The drive-by shooting pattern points to this and is now being examined by the Shin Bet and the IDF. One possibility is that a spotter was used in two recent attacks to identify approaching Israeli targets and pass on the information to the terror cell. “It is likely that the territory boasts a cell that is more organized than we thought,” a senior IDF officer admitted to me, speaking on condition of anonymity, on June 29. “We are possibly looking at a more well-trained local organization that operates systematically in the territory. We hope to get our hands on them soon.”

The IDF has deployed an extra infantry battalion in the West Bank in recent days to bolster its presence in the area. “Now we have a large presence on the ground,” the IDF told Israeli media. They explained that this will help avert new terror attacks and tighten the counterterrorism network. It will also enable the IDF to operate a great deal of intelligence. The problem, they say, is that it is very hard to track the type of terror attacks that the IDF has to deal with now; the perpetrators fire shots at an Israeli car traveling in the middle of the night on a desolate road, then disappear.

According to Cohen, the Palestinian public lacks the energy and fury necessary for igniting a new intifada. He told the Knesset’s Foreign Affairs and Defense Committee that the Palestinians are focused on their personal welfare. The West Bank economy is stable and the Israeli counterterror system, assisted by Palestinian Authority forces, prevents loss of control. On the other hand, terror-encouraging triggers do exist: the continuous efforts of Hamas to incite the territory and carry out terror attacks, the lack of a diplomatic horizon and all kinds of global "triggers." These are the forces at work in Judea-Samaria, for and against the undermining of stability.

All these events are taking place in the midst of Israel’s policy of easing restrictions on the Palestinian population, both in the Gaza Strip as well as in Judea-Samaria. About 70,000 licensed Palestinian laborers work in Israel these days, together with roughly 40,000 unlicensed workers. Thus, more than 100,000 Palestinians are estimated to be supporting about 700,000 people in the territories, a conservative figure. Meanwhile, Israel has been easing restrictions on Palestinians in many different spheres, including on Palestinian movement and entry to Israel, in the hiring of Palestinian laborers and Palestinian commerce. However, this places Israel on the horns of a dilemma, because the political right wing and the settlers unanimously view the easing of restrictions as one of the causes of the renewed terror. On the other hand, Israeli security experts gauge that continued easing of restrictions should lower the motivation for carrying out terror acts. All that remains now is to decide whether to continue to ease restrictions or retreat to the relatively safe political boundaries of separation and restrictions.

“On the whole, we have things under control on the ground,” said a high-level IDF officer to Al-Monitor, on condition of anonymity. “Both sides are aware of the price of escalation. Today, if a Palestinian wants to travel from the West Bank town of Jenin to Nablus to bring car exhaust parts for his car, he starts [his] car and gets there within half an hour, 40 minutes. Tomorrow that route can become an impossible Via Dolorosa, taking many long hours. They know that it takes only a seven-hour warning to reinstate the five checkpoints that had been in place between these cities [Israel decreased the number of West Bank checkpoints over the past few years] and turn the traffic between them [in]to a veritable nightmare. They don’t want to go back to that place, and we don’t either. There is no reason that we should go back there.”

Yet there are elements out there who very much want to return to that place. Defense Minister Moshe (Bogie) Ya’alon said June 30 that responsibility for the recent drive-by shootings in the territories can be traced to the Hamas headquarters in Turkey. According to Ya’alon, the funding comes from Iran, which — after a long hiatus — renewed its support for Hamas. Ya’alon has access to all of Israel’s intelligence information, so it is possible that his statements precede an imminent deciphering of the Hamas-Turkish link to the terror attacks in the territories.

The Shin Bet chief said in the Knesset committee meeting that Hamas’ sovereignty in Gaza is beginning to wear out, and that the threat to this sovereignty comes mainly from Salafist organizations and IS. If we connect the dots between the statements made by Ya’alon and Cohen, we may glean that Iran is trying to strengthen Hamas vis-a-vis the IS threat. Ultimately, IS threatens not only Hamas, but Israel as well.

Today, while I am writing this article, on the anniversary of the mass protests that preceded the overthrow of Islamist President Mohammed Morsi on July 3, 2013, by the Egyptian army — leading to President Abdel Fattah al-Sisi’s rise to power in Egypt — dozens of insurgents from an IS-affiliated organization have executed a bloody attack on Egyptian military bases and facilities throughout the Sinai Peninsula. Initial reports talk about dozens of Egyptian soldiers killed, armored Egyptian military vehicles taken by the attackers and many wounded from all sides. In comparison to what is transpiring all around us, the West Bank is still an oasis of stability and relative quiet in a very turbulent region.