The IDF has learned its lesson from the previous intifada, recommending now to contain the terror incidents and try to spread calm, as called for by Defense Minister Moshe Ya'alon, instead of launching a military confrontation. 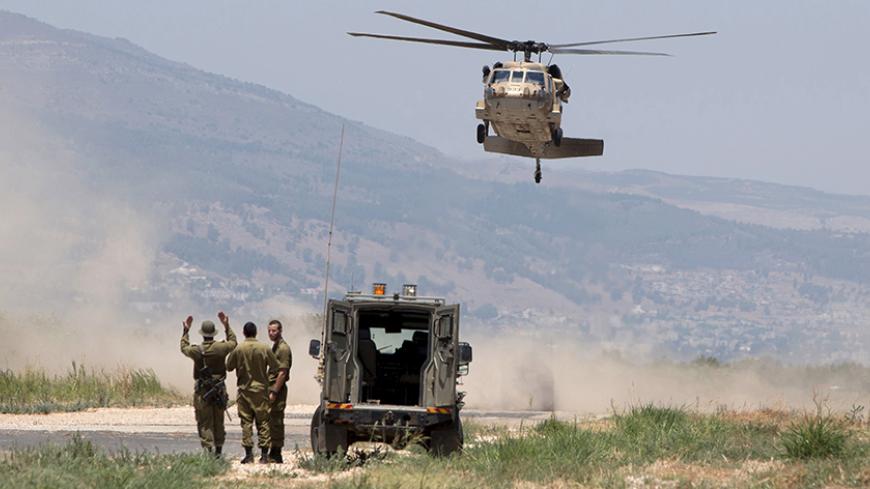 Israeli soldiers guide a UH-60 Blackhawk helicopter with Israel's Defense Minister Moshe Ya'alon on board, at the Hula Valley landing zone in northern Israel near the border with Lebanon, July 20, 2015. - REUTERS/Carolyn Kaster

Maj. Gen. Roni Numa, head of Central Command and the Israeli sovereign over the territories of Judea and Samaria, held a background briefing on Nov. 24 with Israeli military correspondents.

Numa originally comes from the Paratroopers Brigade with 30 years of combat experience under his belt, including command of the elite undercover Duvdevan unit and the air force’s elite Shaldag unit. But this experience has not prepared him to cope with the bizarre terror wave that has been shaking up the territories and Israel proper in the last weeks — terror involving occasional knife stabbings, car-ramming attacks, improvised shootings and scattered demonstrations. Between Oct. 1 and Nov. 29, the terror attacks have claimed the lives of 22 people. More than 100 Palestinians, most of whom were the assailants themselves, were killed in those events.

Numa — like the entire Israel Defense Forces (IDF) — refuses to call the current situation an intifada. The military classification of the events is “a limited uprising,” because the Palestinian masses are sitting on the fence and are not involved in the violence. The Palestinian Authority’s (PA’s) security apparatus continues to fight the terror and tries to prevent it, the Fattah-affiliated Tanzim militia still holds their fire and the cells that have been involved in shooting attacks are not organized and do not operate as part of an official organizational structure. In addition to the strong incitement that is always present in the Palestinian media and social media networks, Hamas is mainly responsible for instigating the grass-roots terror from their base in the Gaza Strip. Also, the hysteria fomented by the northern branch of the Israeli Islamic Movement, which was outlawed on Nov. 17, in regard to the Temple Mount, has contributed its part as well.

During the briefing, Numa presented the approach of the IDF: Israel should react with restraint and attempt to create incentives encouraging the Palestinian population to continue to distance themselves from terror, consider an increase in work permits and strengthen the PA’s security forces. Numa’s statements were subsequently misinterpreted by some journalists who rushed to publish online reports saying that the IDF has proposed to provide weapons and armored vehicles to the PA in the midst of the terror wave to allow them to enter the refugee camps and fight terror. Before the terror wave began, Numa had, in fact, talked about this plan, which was submitted to the political echelons, but it was frozen. He was in favor of implementing some parts of the program once quiet had returned to Judea and Samaria for a period of several consecutive weeks, as a kind of incentive to restore law and order.

At the exact same time that Numa briefed the media, the diplomatic-security Cabinet met in Jerusalem. One of the prime minister’s assistants asked Prime Minister Benjamin Netanyahu to leave the room, where he was updated on the news that had appeared a few minutes earlier on one of the news sites. The article's headline stated that the army was proposing to act with restraint and ease the restrictions on the Palestinian population. At that very same moment, the Cabinet had been discussing the adoption of stringent steps against terror, including the continuation of house demolitions, the deportation of families of terrorists to Gaza, the imposition of closures on those villages from where assailants have emerged and additional restrictions on the population, including the revoking of work permits from laborers who live in areas from where assailants have operated.

Thus, while the political echelons were planning to toughen the responses against the increasing terror attacks, the military was recommending the opposite course of action: the easing of restrictions on the Palestinians. Netanyahu was furious when he returned to the Cabinet session; ministers present said that “smoke came out of his ears” when he reported what the Central Command had said. Defense Minister Moshe (Bogie) Ya'alon and Chief of Staff Lt. Gen. Gadi Eizenkot exchanged confused looks. One of the ministers told Al-Monitor on condition of anonymity, “They didn’t know where to hide.” Ultimately, Ya’alon and Eizenkot backed up their general and claimed that “his words were evidently taken out of context.” A cry arose among right-wing ministers calling for the dismissal of the head of Central Command, or at least caution him. But the military rejected the demand out of hand.

This incident is a perfect example of the "theological" debate currently being waged in Israel between two separate approaches. Paradoxically, Netanyahu leans toward siding with the military’s recommendation of not inflaming the situation by tightening the reins on the Palestinians, but instead attempting to contain the terror incidents and hope that the violence will die down in the coming weeks — as opposed to risking an escalation. Netanyahu cannot allow himself to be viewed as supporting an allegedly defeatist approach.

To Netanyahu’s right, Yisrael Beitenu leader Avigdor Liberman is conducting an effective right-wing propaganda campaign. He calls the government’s treatment of the terror wave "a catastrophe" and gives Netanyahu a grade that indicates failure. Liberman is attracting sympathizers and gaining in popularity with every terror act. Within the coalition sit Ministers Naftali Bennett and Ayelet Shaked who also complain about the “soft hand” of the IDF and the government. Next to them sit the Likud ministers, almost all of whom are more to the right than Netanyahu. Yisrael Katz, the aggressive transportation minister, was quick to publish an uncompromising “demands list” after the Cabinet meeting in which he had participated as a high-level minister. Only in Israel could a Cabinet minister who is part of the government’s decision-making mechanism make demands of that same apparatus only 15 minutes later. One way or the other, these forces push Netanyahu to the right, even though his inner logic and his head are somewhere else entirely.

Ya'alon, who is on the same page as Eizenkot, is currently maintaining his sanity and calming the flames. Both of these seasoned, highly experienced generals have learned the limitations of power from every conceivable angle. Both have dealt with the bloody second intifada: Ya’alon as chief of staff and Eizenkot as commander of the Judea and Samaria Division. Both remember the IDF’s deadly readiness and efficacy at the onset of the October 2000 events, where 13 Israeli-Arab demonstrators were killed, which inflicted heavy losses on the Palestinians while Israel had far fewer losses. This did not curb the violence, but only radicalized and exacerbated it. The Palestinians, who understood that they had no military answer, attacked Israel with scores of suicide terrorists, thus forcing Israel to conduct Operation Defensive Shield in 2002 to regain control of the territories and fight terror at home for three years, until it was vanquished.

Ya’alon and Eizenkot are well aware that today’s situation is not as serious as it was then. The Palestinian leadership opposes terror, as does the Palestinian security apparatus, and there is no reason to push them toward violence. It is better to be smart than right. Right now, Ya’alon and Eizenkot are in control of the situation, mainly because they have Netanyahu’s discreet, hesitant backing. The continuation of the terror attacks, or a worsening of the situation, can change this overnight. None of the sides really wants that to happen, but in the Middle East, you don’t always get what you work for.