Israeli Defense Minister Avigdor Liberman ordered the military unit coordinating activities on the West Bank to sever civilian ties with the Palestinian Authority while maintaining security cooperation, but the two are inseparable. 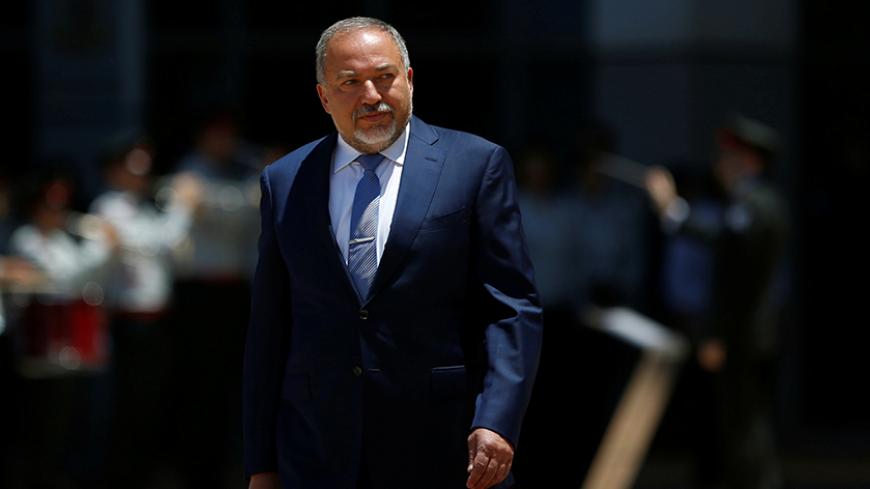 Israel's defense minister, Avigdor Liberman, the head of the far-right Yisrael Beitenu party, reviews an honor guard during a welcoming ceremony at the Defense Ministry in Tel Aviv, May 31, 2016. - REUTERS/Ronen Zvulun

Israeli Defense Minister Avigdor Liberman was not about to be left out of the offensive launched by Prime Minister Benjamin Netanyahu against the states that on Dec. 23 supported UN Security Council Resolution 2334, condemning Israeli settlements in the West Bank, including East Jerusalem, as a violation of international law. On Dec. 24, Liberman instructed Maj. Gen. Yoav Mordechai, who heads the Coordination of Government Activities in the Territories (COGAT), to sever ties with the Palestinian Authority (PA) and avoid working sessions with its senior officials on civilian-diplomatic matters.

Liberman’s instructions do not relate to COGAT’s activities in the territories per se, but will make carrying them out more difficult, cumbersome and inefficient. To prove to the Israeli public that he, too, has the authority to retaliate and the punitive measures with which to do so, Liberman is acting against the Israeli defense policy of maintaining routine life for the Palestinians in order to ease tensions and reduce security threats to Israel.

In light of the lessons learned from the second intifada, which rocked Israel between 2000 and 2005, the Israel Defense Forces (IDF) opted to avoid collective punishment in the West Bank during the recent wave of terror that swept Israel, in order to prevent large swaths of the Palestinian public from joining in the violence. The pervasive approach was and remains to pinpoint perpetrators of terror and act against them in the West Bank, while at the same time relaxing restrictions on other Palestinian civilians, making their lives easier.

Despite the concern over potential terror attacks, no new roadblocks were erected in the West Bank, and transit points into Israel were not sealed. On the contrary, defense authorities encouraged the issuance of tens of thousands of permits for Palestinians to work in Israel in order to ease their financial straits and thereby lessen the motivation of young Palestinians to engage in terror activity.

This policy, which senior IDF officials describe as a “soft and wise hand,” according to a military source speaking on condition of anonymity, was advocated primarily by the IDF chief of staff, Lt. Gen. Gadi Eizenkot. The head of Central Command, which holds jurisdiction over the West Bank, Maj. Gen. Roni Numa, was also on board.

The latest wave of terror attacks has almost been suppressed, but Liberman, motivated by political considerations, has chosen to shake things up and put spokes in the wheels of the civil administration. Whereas Netanyahu’s controversial retaliatory moves in the wake of the Security Council resolution could result in a deterioration of Israel’s international standing, Liberman’s actions endanger the security of the country’s inhabitants.

The Defense Ministry’s instructions are to sever ties with the PA on civilian-diplomatic matters but to maintain security coordination on the West Bank, but the two cannot be separated. Coordination on civilian and security affairs are intertwined. Economic pressure and sanctions against the PA have in the past proven to be precursors to outbreaks of violence.

Taking security cooperation with the PA for granted is a conceptual mistake. A senior Palestinian defense source told Al-Monitor on condition of anonymity that Liberman will very quickly realize his error if he thinks he can undermine the PA’s civilian affairs and still maintain security coordination as usual. The source said there is tremendous pressure on Palestinian President Mahmoud Abbas to cancel security cooperation that only serves Israel, but he has so far staunchly resisted and refused to undermine cooperation.

In light of Liberman’s instructions, Abbas will now have to decide whether he is willing to keep quiet about every provocative Israeli move in the West Bank, according to the source. “We are currently trying to understand what the decision means,” he said. “Will it really have any effect on the ground, or is it just talk for political needs? But even if we find out that these are just words designed to appease the Israeli right, this game cannot continue. You can’t come and say, ‘Keep on with the security coordination, because we find it convenient, and it protects our security,’ and at the same time slap Abbas in the face and portray him as a malleable partner. This cannot go on, and it cannot work this way.”

According to the Palestinian source, Israeli civil administration officials have expressed their displeasure with the order handed down by their boss. He added that Abbas will not rush to annul security coordination, but could choose other, less radical steps, which he declined to identify.

“The Israelis know exactly what we can do and how it can harm them,” he said. “Liberman and Israel aren’t the only ones who have tools. We do, too. The difference between us is that we are not playing with fire. We are not taking populist measures in order to get applause.”

After years of disappointment in the Palestinian president, even the skeptics and harshest critics of his leadership now concede for the first time that the diplomatic path he chose to follow is proving itself. This in no way, however, lessens, even a little, the pressure of Palestinian public opinion on him and on top PA officials to not give Liberman the other cheek.