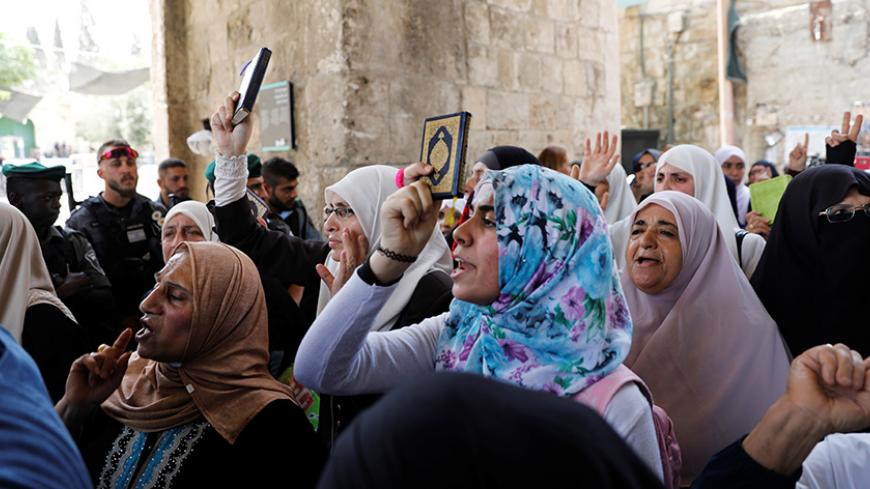 Palestinians shout slogans during a protest over Israel's new security measures at the compound housing Al-Aqsa Mosque, known to Muslims as the Noble Sanctuary and to Jews as the Temple Mount, in Jerusalem's Old City, July 20, 2017. - REUTERS/Ronen Zvulun

Three Palestinians were killed July 21 during clashes with Israeli security forces over the placement of metal detectors at the entrance of the Temple Mount compound. On the same day, three Israelis were killed at the Halamish West Bank settlement by a Palestinian assailant. After these bloody events in East Jerusalem and the West Bank, the Palestinian Authority (PA) informed Israel that it is freezing all ties until the metal detectors are removed. Immediately after this announcement, however, a Palestinian security official told Al-Monitor that security coordination would remain in place, since it was necessary for both parties to restore calm. But as the hours and days passed, Palestinian President Mahmoud Abbas came under increasing pressure, and his tone changed accordingly.

Palestinian sources told Al-Monitor July 23 that they have received explicit instructions from Abbas to cease all ties with Israel, including security coordination. At the same time, however, Abbas approved contacts between lower levels of the Palestinian security apparatus and their Israeli counterparts "in extreme cases." What exactly constitutes an "extreme case" remains unclear.

The Israel Defense Forces (IDF) was pleased with Abbas' commitment to security coordination with Israel. A senior officer in the Central Command told the press as early as July 2015 that he cannot remember any other Arab leader who spoke out like Abbas did by stating decisively that "his way is not the way of violence."

Two years have passed since then, and it looks like security coordination is no longer as sacrosanct to the Palestinians as it used to be. Meanwhile, the Israelis are relaying the message that it is business as usual. "That is their decision. It is not like the security coordination is an Israeli need," said Defense Minister Avigdor Liberman in response to the cutting of ties. "It's a Palestinian need first and foremost. If they want it, they'll continue [coordination], if not, they won't. We don't intend to chase after them over it or force the issue. We’ll manage either way."

Speaking on condition of anonymity, an Israeli security source told Al-Monitor that it is unclear how long this cessation of security coordination will last, adding that it could be a tactical measure by Abbas to reduce public pressure on him. "Nevertheless," he continued, "it is perfectly clear that the mood in the West Bank now is very different from the mood just before the wave of terrorism erupted in autumn 2015. All of our sensors are buzzing, telling us that something is happening — that it isn't good and that the explosion could happen at any moment."

According to that same source, many factors impact the situation, including economic distress and the lack of hope sensed by the younger generation, which is losing confidence that the situation will change anytime soon. "When we add the level of incitement and hatred, the picture that emerges is not very encouraging. It looks like we are on the verge of another intifada," he said.

One expression of the concern that a new wave of violence could erupt can be found in comments by Chief of Staff Lt. Gen. Gadi Eizenkot during a visit to the IDF's induction office on July 23. He said that when we compare what is happening now to the last wave of terrorism, in September 2015, what we are witnessing is "something different." IDF spokesman Ronen Manelis explained that the "something different" is "the impact of the religious motif on the Palestinian street, which legitimizes acts of terror."

In a conversation with Al-Monitor, however, a Palestinian security source utterly rejected claims that growing religious extremism is the primary motivator to the rage felt by young people. Nevertheless, he did admit that he does not remember seeing anything like the current pressure placed on the PA or the tense mood throughout the West Bank as a result of the recent events at Al-Aqsa Mosque since the second intifada (2000-2005).

"What happened at Al-Aqsa Mosque is the straw that broke the camel's back. Still not everyone who was outraged by Israel's actions in al-Quds [Jerusalem] is responding out of pure religious motivation. Many are responding to the overall feeling that there isn't a single place left that the Israelis haven't touched and desecrated," said the source, speaking on condition of anonymity. He also claimed that the measures that Israel is currently taking in Jerusalem and the West Bank leave no window for hope. He noted that Israel is doing whatever it wants, without taking into consideration that there is another side, which also has something to say in the matter.

The source made it clear that the situation had reached the point that if Abbas had not taken what he considers to be dramatic steps (suspending ties with Israel), he would have been putting various key officials throughout the PA at risk, including himself. Israel knows that the members of the Palestinian security forces have come under intense pressure over the past few years, leaving them caught between a rock and a hard place. They are obligated to follow the explicit instructions of Abbas to maintain their commitment to security coordination, but at the same time they feel as if they are acting against their conscience. Given this background, Abbas has been forced to declare the cessation of security coordination with Israel. In a meeting with scientists at the Muqata (seat of the Palestinian government) on July 23, Abbas said that the decision was difficult but necessary.

"The PA is fighting against terrorism and violence. Israel wants to fight terrorism and relies on us for that, but it is not keeping its side of the bargain. If Israel wants security coordination to continue, it must retract its decisions concerning Al-Aqsa," Abbas said.

The same Palestinian source explained that Abbas sent a very big hint to Israelis. If Israel would have coordinated security arrangements at Al-Aqsa Mosque with the PA, as it has been doing effectively in the West Bank for years, things would have looked different now.