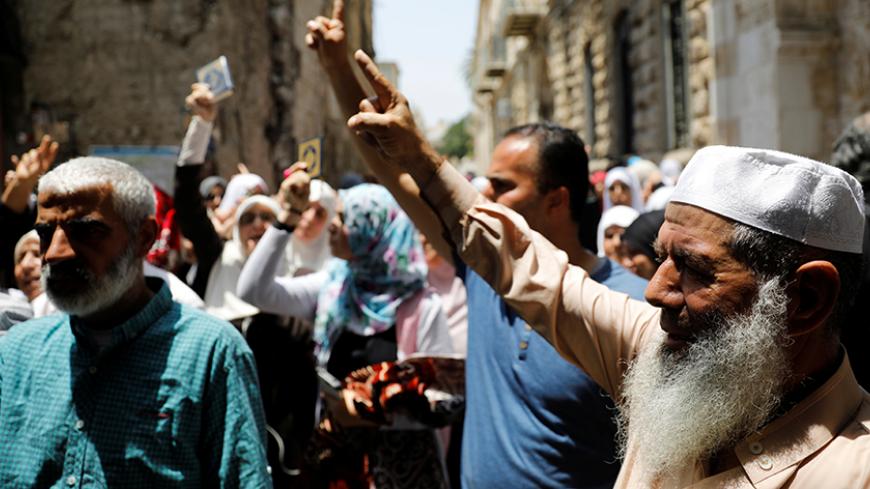 Palestinian President Mahmoud Abbas cut a visit to China short and returned to Ramallah on July 19 to be on hand on July 21 for Friday prayers at Jerusalem’s Al-Aqsa Mosque.

Palestinian Authority (PA) officials described the upcoming prayers as critical, given that Palestinians have been protesting and rioting since July 16 against Israel's introduction of metal detectors at the entrance to the Haram al-Sharif (or Temple Mount) following the July 14 terror attack there in which three Israeli Arab gunmen shot dead two Israeli police officers. Abbas has been aware that leading activists in Fatah, the movement he leads, have been inflaming popular sentiment and encouraging an escalation against Israel that could end in an uncontrollable bloodbath.

This is not the first time central Fatah activists, especially from the Tanzim, the organization’s armed wing, have gone against Abbas' expressed wishes and declared policy as he has gone about trying to resolve crises and ease tensions on the ground. That was the case earlier this year, for example, during the hunger strike by Palestinian prisoners in Israeli jails instigated by Marwan Barghouti, the senior Palestinian prisoner held by Israel, in an attempt to bolster his standing within Fatah.

With riots ongoing in Jerusalem and several other locations on the West Bank, Fatah declared July 19 a Day of Rage, urging the faithful to protest the new Israeli security measures. That particular declaration was not the only action raising Abbas' ire. In addition, Israel had given him information to the effect that Fatah officials were coordinating activities with the Waqf — the Muslim custodian of the site, which strongly opposes the metal detectors — and allocating resources to fan the flames.

To protest the metal detectors, the Waqf announced that July 21 prayers will not be conducted in Jerusalem mosques. They have called instead for worshipers to gather in the plaza in front of Al-Aqsa and pray there. The “weapon” that the Waqf is preparing is obvious. Tens of thousands of religious adherents will mass around the Israeli police and soldiers at the site, such that events could spiral out of control and into bloodshed.

This is where the Fatah activists come in. Not only did Fatah call for the July 19 Day of Rage to stir up the masses and undermine Abbas' international diplomatic efforts. Information conveyed by Israel to the PA indicates that Fatah also seeks to mobilize the organization’s resources to thwart efforts by Abbas and Jordan’s King Abdullah II to restore calm and prevent violence.

Fatah has been logistically mobilizing ahead of Friday prayers: Calls have gone out to worshipers to come en masse “to protect the holy mosque,” and buses have been put at the disposal of West Bank Palestinians holding permits to travel to Israel to go pray at Al-Aqsa. Fatah plans also to organize large protests around Israeli army roadblocks in Ramallah and Bethlehem for those unable to reach Al-Aqsa and to hold marches in support of the worshipers who set out to Jerusalem “to bring down the Zionist magnetometers.”

Al-Monitor has learned that Israel presented the Palestinians with a list of Fatah members allegedly escalating the situation on the ground and inciting youths to confront the Israeli military. They are headed by Mahmoud al-Aloul, Abbas’ deputy and former head of the Tanzim, and Abbas adviser Sultan Abu al-Einein. I have written in Al-Monitor in the past about the duplicitous game Aloul is playing in Fatah. On the one hand, Abbas pushed hard for Aloul to be appointed his deputy at the Fatah convention held in February, managing to sideline the better-known and more popular candidates, including senior Fatah officials Jibril Rajoub and Barghouti.

Since taking office, the deputy Fatah leader has been operating counter to Abbas’ policies. The prisoners’ hunger strike, which Aloul supported, is one such example, and recent events in Jerusalem even more so. A blowup between Israel and the PA involving violence could jeopardize Abbas’ hold on power.

Aloul was the person behind the calls for Wednesday’s Day of Rage. He was also behind the call to young residents of the West Bank to clash with Israeli soldiers at roadblocks during the April hunger strike. That was the first time since the end of the second intifada, in 2005, that Fatah had openly called on Palestinian youths to confront Israeli soldiers at roadblocks. The paradox about the hunger strike Day of Rage was that Abbas ordered PA forces to curb demonstrations and disrupt his own movement’s call for confrontations.

“Many Tanzim activists are involved in the sedition campaign over the mosque,” an Israeli source told Al-Monitor. The source, speaking on the condition of anonymity, said that Israel has made clear to the Palestinian security forces that unless the PA takes immediate and determined action against those whose names they submitted, “Israel would find a way to deal with them.” The source added, “Such a message will be received loud and clear.”

“There are many elements in the region seeking to gain political capital from the friction over the Temple Mount,” he asserted, referring to some members of the two largest Palestinian factions, Fatah and Hamas, which are vying to be “Al-Aqsa Champion.” These elements are not, however, motivated by concern for the mosque’s safety. “They are motivated by frustration and a desire to improve their political and personal standing within their organizations,” the source observed. “The beleaguered Hamas is praying for better times, and Abbas’ opponents are praying for his disappearance, stirring trouble for him at home in the hopes he will go.”

According to the source, now more than ever, Abbas understands the extent of the threat he is facing, and that is likely the reason he decided to rush back to his headquarters from China. “The activists encouraging escalation in the territories are mostly people identified with Marwan Barghouti,” he said. “They have suffered a defeat over the hunger strike and are presenting Abbas and his people with a direct challenge.”

The source added that the events on the Temple Mount are a “godsend” for Barghouti’s men, explaining, “They will do all they can to encourage as many Palestinians as possible to clash with the Israelis and hope the resulting escalation will restore their control over the rank and file and the respect they have lost among most young Palestinians in the West Bank.”

Abbas probably understands now that the man he handpicked as his deputy, instead of the other candidates whom he pushed away for fear they would unseat him, is turning out to be a dangerous choice, both for his rule and for his people.