Israel is concerned over Fatah officials' call for continued mass protests stemming from recent events at the Temple Mount. 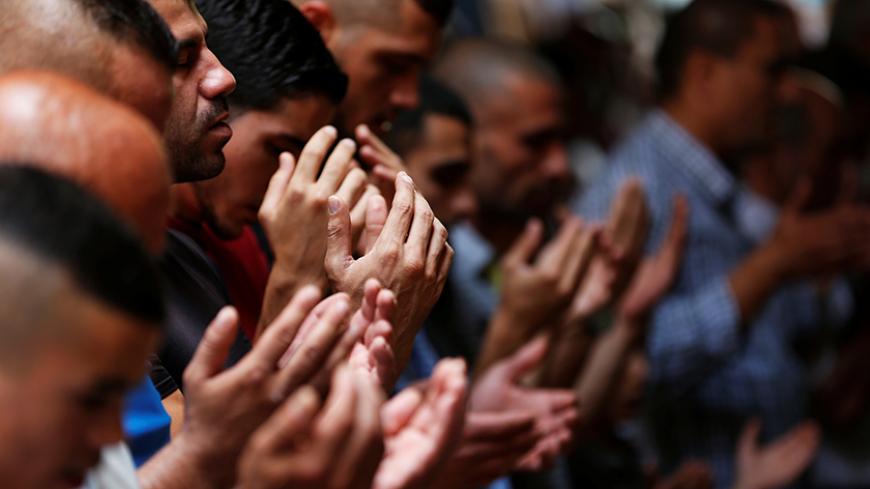 “Israeli security agencies have prepared a package of sanctions against the Palestinian Authority [PA] if it turns out that Palestinian President Mahmoud Abbas and the heads of his Fatah movement are pushing the Palestinians into a clash with Israel in the West Bank,” an Israeli defense source has told Al-Monitor on condition of anonymity.

Israel is closely monitoring preparations by the Tanzim, Fatah's armed wing, for Muslim Friday prayers on July 28. Although Israel has removed the contentious metal detectors from the entrance to Jerusalem’s Haram al-Sharif compound, it appears that Abbas and the other leaders in his movement are not interested in restoring calm and are instead openly calling for an escalation.

Israeli officials believe that senior PA officials, especially from the dominant Fatah faction, have interpreted Israel’s removal of the magnetometers in the face of international and regional pressure as a sign of weakness on Israel’s part and are unwilling to stop the momentum they have gathered.

Tanzim leaders convened July 26 in Ramallah, the seat of the PA in the West Bank, and adopted a unanimous decision to instigate clashes with Israeli troops. They have designated the events planned as “Jum’at al-Miyadin” (Town Square Friday) and are not only calling on Palestinians to hold public demonstrations, but is also providing them with the means to ensure a mass turnout to confront Israeli forces at roadblocks erected at the entrance to Palestinian towns.

This is a dramatic shift for Abbas, who has always been considered an advocate of nonviolence. Fatah leaders insist the protests are part of a popular struggle, but no one really believes that mass demonstrations will not deteriorate into violence. Not only that, but Israeli security officials are convinced that the PA’s goal is to inflame public sentiment, thereby buttressing Abbas’ standing as a leader of the protest and not as a pawn unwillingly dragged along.

“After years during which the movement was considered defunct, unable to motivate the Palestinians who had grown tired of leaders they perceived as corrupt, Fatah enjoys the feeling that its calls are suddenly being heeded,” said the Israeli source, who believes Fatah is wrong to expect that thousands will heed its call. “Even if only several hundred come out and clash with soldiers at the roadblocks, it could result in bloodshed, and it will be their fault.”

As previously reported by Al-Monitor, Israel has detected clear signs that since taking office earlier this year, Abbas’ deputy, Mahmoud al-Aloul, has been pushing the Tanzim to confront Israeli troops at roadblocks, and instead of reining him in, Abbas is getting in line with the radical voices emanating from his movement. Along with the head of Fatah's armed wing, Jamal Mhissen, and Tawfiq Tirawi, the former PA intelligence chief and current Abbas adviser on security affairs, Aloul took part in the Tanzim meeting in Ramallah that called on Palestinians to clash with the forces of the Israeli occupation.

After seeing top Fatah figures led by Tirawi openly promoting clashes with Israel, the Israelis have come to the foregone conclusion that this time, the Palestinian president is the one seeking an escalation with Israel for domestic political reasons. The security source said that even before the Tanzim meeting, Abbas had chosen to encourage protests and called on Palestinians to take to the streets, appealing directly to residents of East Jerusalem, where Al-Aqsa Mosque is located, as if they were soldiers on a battlefield. At a Fatah leadership meeting held July 25 in Ramallah, he was emotional, declaring, “You did the right thing. You stood up as one, and we, the Palestinian leadership, support you and everything you do.”

Israel has noted that Abbas did not use the past tense in his offer of support, interpreting his comments as a call to “keep up the good work, don’t stop.” At that same meeting, Abbas once again pulled out the international weapon he likes to wield, threatening an appeal to UN bodies and other international organizations, including the International Criminal Court in The Hague. The Israeli source said Abbas’ threat violates his pledge to Jason Greenblatt, President Donald Trump’s Middle East envoy, to withdraw all his demands for international sanctions against Israel to generate a climate conducive for the start of US-mediated negotiations with the Israelis.

Town Square Friday will be a test for all the players on the Al-Aqsa pitch. The security source suggests Abbas may be playing both sides. Publicly he gives his people the sense that he is leading a religious, national struggle against Israel, but in fact, his security forces will react as they recently have, diverting the protests a safe distance from Israeli roadblocks. “Nonetheless,” the source said, “with Fatah stirring up public sentiment, the prospects of being able to stop in time before they spiral out of control are not good.”

Friday will also test Abbas’ mettle in regard to the Fatah forces seeking to drag him inexorably into an escalation with Israel. Judging by his declarations, Abbas is indeed heading toward escalation, though unwillingly. Friday also presents a challenge for Israel. Will it be able to ignore the PA’s open support for a call to arms?

According to Israeli security assessments, if Fatah and Tanzim activists sense that Israel is helpless in the face of their provocations, their appetite for confrontation will grow. As far as security officials are concerned, Israel must draw a line and make clear that it will not stand for further violence. That is why the government has already updated emergency procedures for dealing with a recalcitrant PA that fails to understand that its leaders are playing with fire.