The Palestinian Authority is concerned about the escalating security incidents occurring between the security services and members of Fatah in the West Bank. 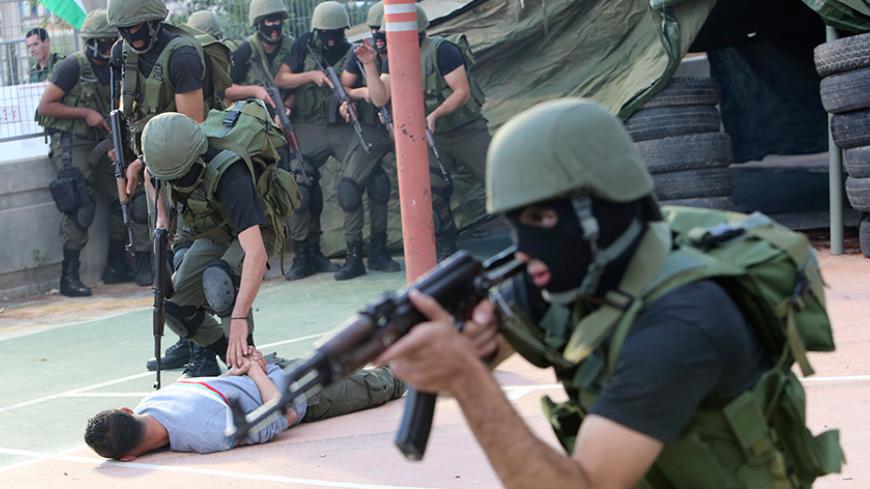 Members of the Palestinian security forces take part in a training session in the West Bank town of Tubas near Jenin, Nov. 17, 2014. - REUTERS/Abed Omar Qusini

Unidentified gunmen attacked and stole nearly $850,000 from a Palestinian Investment Bank armored car Sept. 15 at the entrance of Bir Nabala near Ramallah. That same evening, gunmen fired at members of Palestinian security forces in Jenin, injuring some of them.

These incidents highlight the security vacuum that has prevailed in the West Bank since early this year, especially in some major cities such as Jenin and Nablus, north of the West Bank. These problems result from clashes between Fatah gunmen and Palestinian security services, and sometimes from family disputes.

The deteriorating situation pushed Palestinian Prime Minister Rami Hamdallah to hold a session Sept. 14 for leaders of the Palestinian security forces to follow up on the events.

A senior Palestinian official told Al-Monitor on condition of anonymity, “The state of security chaos in the West Bank has resulted since early 2015 in about 26 Palestinian deaths — seven of which were in Nablus — and the majority of those involved in these incidents are security services personnel.”

The tension in Nablus prompted Palestinian security services to launch a security crackdown Sept. 5. They also brought reinforcements into the city, including three security teams trained in Jordan.

During a Sept. 5 press conference, Nablus Gov. Akram Rajoub threatened to prosecute those responsible, as the chaos has become unbearable in the city.

Hussam Khader, a member of Fatah’s Legislative Council from Nablus, criticized President Mahmoud Abbas and told Al-Monitor, “He is ignoring the armed chaos and the drug trade in Nablus." He added, "His advisers [however] are hiding the truth about the deteriorating security situation from him, and are keeping him out of the loop when it comes to the reality on the ground in the Palestinian territories.”

Since the Palestinian Authority (PA) came to power in 1994, Nablus has been witnessing disputes between its security and political leaders. One such dispute is between Mahmoud Aloul, a member of Fatah’s Central Committee and former governor of Nablus, and Ghassan Shakaa, a member of the Executive Committee of the Palestinian Liberation Organization who resigned Aug. 10 as mayor of Nablus following popular protests against poor municipal services.

Another dispute is ongoing between Rajoub and Jamal al-Tirawi, a member of Fatah’s Legislative Council.

These four parties — Shakaa, Aloul, Rajoub and Tirawi — have security forces personnel and great political influence. Shakaa is a former mayor, while Aloul has a history of struggle against Israel since he joined the Fatah movement and led battles against Israel in the 1970s and 1980s in Jordan and Lebanon.

Also contributing to the chaos is Fatah's leader in the Gaza Strip, Mohammed Dahlan, who enjoys influence in the West Bank through his alliance with Shakaa and Tirawi. Dahlan has financial resources that allow him to buy loyalties within Fatah.

This negatively affects the refugee camps in Nablus, especially the Balata camp. Fatah's armed wing, Al-Aqsa Martyrs Brigades, has been intervening in the camps and leading armed clashes since early this year. The brigades are affiliated with the parties to the conflict, and they and unidentified parties exchange accusations and threats.

Security problems inside the West Bank camps are intensified, as the municipalities and the PA do not provide the people with basic services and care. This negligence deepens tension in the camps, where Palestinians often support the armed men against the security services.

The security incidents in recent months affected several cities in the West Bank. On Feb. 5, the eastern region of Nablus witnessed armed clashes between Palestinian security forces and Fatah militants during which machine guns were used. Then on April 25, youths from the Balata refugee camp stole the weapon of a member of the General Intelligence service, following a dispute between them in central Nablus.

On May 24, Al-Aqsa Martyrs Brigades in Nablus threatened to kill military intelligence officer Lt. Col. Abdul Hakim Wadi, accusing him of being a spy for Israeli intelligence. On the evening of May 25, violent clashes erupted in the Balata refugee camp between the Palestinian security forces and armed men after the security services tried to break into the camp to arrest a wanted individual.

On June 13, violent clashes broke out in the city of Tulkarm between Palestinian security forces and some of the families who were calling for a march in solidarity with one of their own who was detained by the Palestinian military intelligence services.

Maj. Gen. Tawfiq Tirawi, a member of Fatah’s Central Committee and former head of General Intelligence, sent a message Aug. 15 to Abbas warning of a massive wave of chaos that could take over the West Bank.

A Palestinian journalist from Nablus told Al-Monitor on condition of anonymity, “There are security incidents in the West Bank resulting in armed clashes due to the trade of arms, drugs and cars. In recent months, the PA tried to carry out several security crackdowns to adjust the security situation in the West Bank, after [the PA] received information that Dahlan is providing some armed groups with ammunition. Other camps witnessed security chaos — such as Balata, Tubas, Ein Beit Ilma, Askar and Faraa — as armed men arrived to the camps, while the residents rejected what they considered violations by the security services against them.”

Al-Monitor learned from a Palestinian official from Abbas’ presidential office that Najat Abu Bakr, member of parliament in Fatah’s Legislative Council, called on Abbas to “form a commission of inquiry to find out the real reasons behind the spiral of violence in the Palestinian community, as it has significantly increased and included the destruction of public and private property.”

The violence in Nablus could hurt the economic situation in the city, as criminals who still walk around the streets without being prosecuted are subjecting shops to gunfire at night.

The West Bank is like a cat on a hot tin roof in light of the chaos that is increasing by the day. There are no signs that the problems will be eliminated or even mitigated. In fact, the chaos is expected to get worse still if Abbas leaves the political scene without political and security arrangements agreed upon among Fatah leaders. This could also create various isolated security areas spread inside the West Bank.